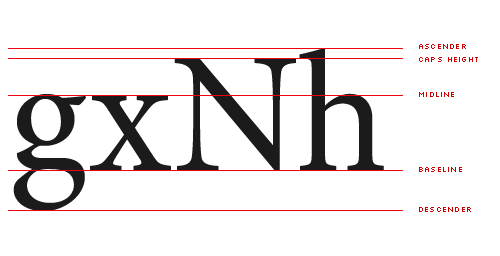 As you can see, there are no common characters that cover that entire span.

With digital fonts, the "em height" of a font is a choice made by the font designer, and does not have to conform to this convention at all: a digital type designer can pick any foundation for their em size. However, fonts still tend to adhere, at least roughly, to the sort of convention described above. In old days when type consisted of metal blocks, the "em height" was the height of one of those blocks - naturally those blocks had to be big enough to fit all the ascenders, descenders, and accents.

Confusingly, many fonts now contain characters that do extend out of the em height. For example, it's common for modern typefaces to include capital letters with accents (such as Ć) - these accents extend outside the traditional typographical ascender and thus these (and possibly other special characters) fall outside the top of the "em". To maintain consistency with older type, we don't adjust the em size to allow these - we keep the em size and just have these extend out of it. Any typographer using such accents will need to ensure there is space for them to extend into, though usually the line gap is adequate in body text.

The line gap in body text is a space left between the descender of one line of text and the ascender of the line below it. The quoted "font size" of text does not include the line gap in its measurement. This is why, when you choose a 12 point size, the lines are not exactly 12 points (1/6 inch) apart.

The line gap for any text can be influenced by many factors, including the software that is displaying it. It can be influenced by the CSS field line-height, where 1.4 means that the line gap is 0.4 times the em height, and thus an entire line of body text will take up 1.4 times the em height including the line gap. In other applications, the line gap can be specified differently: word processors often specify a "line spacing" value as a multiple of some "single line spacing", but unlike in CSS, "single" spacing does not mean no line gap, but some "default" line gap, where the application tries to come up with a default based on metadata in the font file if it exists there. There are multiple standards for specifying metrics in the font (eg in Truetype, there are different Mac and Windows/OS2 standards) so the default line gap can vary between applications and operating systems.

Now, even if a designer does follow a predictable convention for their em height, this still doesn't tell you the size of capital letters (cap-height) or lower case letters like "x" (x-height or midline) as these can vary freely between typefaces in relation to the ascender height. Within a font family, these will usually be consistent. So for example, Times New Roman Bold and Times New Roman Regular have the same cap-height and x-height, and the ascenders, descenders and baseline will all match up between the bold and non-bold sections.

7
TTF and other "modern" font systems, and font size differences
3
How can I keep the font-width consistent in SVG across different operating systems and browsers?
15
In a 85.6mm x 54mm business card, what is an ideal font size?
0
Illustrator: Trouble with font size
1
Adjust font size reltive to another font size in InDesign
3
Small Font Size on Labels, Instructions and User Guides
1
How to get font to align on the ascender line instead of the baseline?