How to twist a complex shape in Inkscape?

I have a shape derived from the letter i:

Each of the blue “waves” and the two orange crosslinks are a path, the dot is a circle.

I want to make the shape derived from a script i instead, following roughly a curve like this one below the dot:

I tried using Pattern along path, but it ended up doing strange distortions and not what I imagined:

It is OK if it can’t be done at once, but I need to apply the same effect to all of the four paths in my shape, or maybe only to the two blue paths – I can somehow arrange the orange paths afterwards. But the blue paths are complicated, with many points, and I don’t think I will get a good effect if I try to bend them by hand.

Any ideas how to do it, if it’s possible at all?

If you want to play with the SVG original, I uploaded the source on pastebin.

This is not the same question as this one. I assume that it is because of my complex shape instead of a simple rectangle – the solutions there don’t work for me.

Update Wrzlprmft's method produced this when used with a two-loop segment traced with Bezier curves:

Beside the strange squish, I'm still looking for a way to use it with an existing combination of curves, instead of having to redraw them using other methods.

I just fully describe what I did to achieve something similar. You need to see which steps you can skip or need to adapt.

Afterwards you may want to uncombine everything and give the single objects the desired style (probably done quickest with Paste Style).

I tried applying Pattern along path to the object but with a small modification as follows: 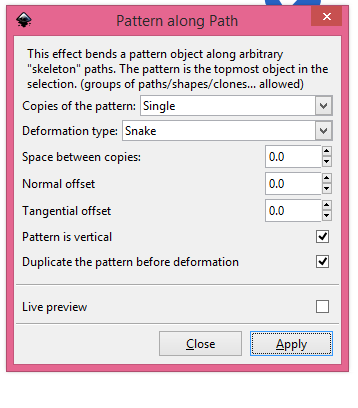 Ensure that the option pattern is vertical is selected.

This is the image which was produced

A small distortion is still existing which can be manually adjusted.

12
How to create a rounded/wave rectangle like this on Inkscape?

5
Reproduce WordArt in Inkscape (trapezoid shape)
5
Color filling the interior region of a traced bitmap
4
Create and Edit parallel “bus” lines in Inkscape
4
Inkscape: how to reuse part of a circular path (inner boundary) and connect it to another path inside of that
3
Draw 3D twist and bends in ribbons in Inkscape
2
Inkscape causing tool paths to be doubled/duplicated
1
How to make this clean hex shape with complex shape inside it?
0
How do I trim the edges of a complex shape in Inkscape?