Critique: Poster for event on Friday the 13th

Do you think the theme is clear enough ? If not, I welcome any suggestions on how to make it more clear. 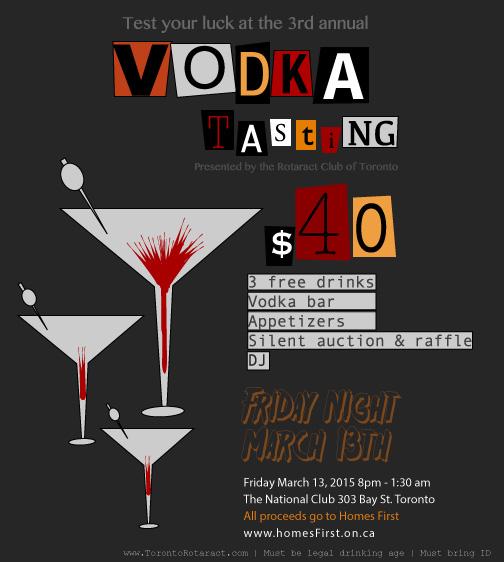 No, I don't believe the message is very clear. It might however be you are lacking in your message to begin with.

Is this supposed to be the movie? Or about the general superstition related to the date?

The black text indicates the movie but is only a small indicator. There's nothing at all related to "testing your luck." I would think dice, coin flip, or something. But then the question is, why is the theme "Test your luck?" Will there be a poker game? A roulette table? Is it a blind vodka tasting and participants have to guess the brand?

The message isn't clear at all, but it might not be clear because it might have been poorly conceived.

First, look at what the basic functions an advertisement [poster] such as this needs to perform?

These 4 items need to be clear and easily determined.

This ad fails where 2 and 3 are concerned.

Overall I like most of the color choices. However, grey on grey for some of the text is impossible to read.

As a sponsor, I'd be a tad upset that the line of text showing my company is impossible to discern from the background. I'd want my name much more prominent. What's the line under tasting read??? is everyone expected to squint and work very hard to read that? Same holds true for whatever that last line of text reads. I can't make it out.... so I won't bother trying. And the general public won't bother trying either.

The same holds true for the shadows "Friday Night March (13th?)" I only know it's the 13th because of your question. I can't tell if that's a 13 or 18 just by looking at it. This type fails miserably and performing its function.

Martini Glasses aren't for vodka. Few may realize this, but to be accurate Martini glasses may not be the best graphic to use.

I, personally am not a fan of the "ransom" lettering or the (let's not put any padding around the bullets) list items. But that's more my own aesthetic taste. Why there's extra right space after "Vodka bar" and "appetizers" but not after "DJ" leaves me wondering.

Overall, if contrast is addressed in the colors/type I think it's an okay image.

I find it all rather confusing. What does luck have to do with a vodka tasting?

Also, the glasses with their tiny, irregular bases and liquid apparently flowing down their stems look more like funnels with a puddle of water below them. One can then interpret the olives on cocktail sticks as pipettes: the wrong sort of chemistry.

Clean up the illustration / make variations, the glasses look very mutch 'copy' pasted. The fluids look weird and do not communicate your concept very well. (for example switch up the olive to another side, maybe some of the drinks could spill over, ... )

Typography: Use less font's , think about 'readability' of certain font's ( the 'friday night' date for example).

Think about the message of the poster, what is it you want to communicate? A poster must work in a way that the message is clear and simple (their can be layers though, of complexity, but at a glance, it must strike you).

The color scheme is nice to work with, the overal hierarchy is working, but their is lot's of work and tweaking!

What could also help: Look up famous examples / inspiration on different platforms , books for inspiration, learn from them ( but don't steal).

Your design reminds me of the Horrormovie "Friday 13th" - Is that what you're aiming for? If not, i'd suggest a more "luck"-oriented kind of style..maybe something with a one-armed bandit or something like that?

For starters, I'm not sure what "Friday the 13th" theme would be. Is it referring to the movie franchise?

I think the martini glasses work very well to communicate 'vodka tasting' so that's a strong element. [EDIT: as the comments note, this is probably incorrect. Vodka Martinis aren't the norm when one thinks of a martini. A martini glass would typically be more appropriate for gin. A small tumbler would likely be better glassware to represent (perhaps with ice)]

The Ransom Note lettering, however, seems out of place. I don't recall if that was an element in the films. If not, then I'd rethinking using it as it has strong symbolism outside of Friday the 13th at well and is a bit confusing in this context.

The style of lettering for "Friday Night, March 13th" definitely seems more inline with the film series, but it also the most subdued of all the type in the layout. As it feels like the most important bit of information, I'd suggest rethinking how you've implemented that type. Figure out how to emphasize that over the other type.

The bottom line, if I were invited to this party, I'm not sure I'd understand from this invitation what the theme actually is and what I'd be expected to wear/bring to fit in based on this invite by itself.

Not the answer you're looking for? Browse other questions tagged critique or ask your own question.

1
General feedback on first draft of site design
1
Design critique for 36" x 24" poster announcing coffee shop re-opening
15
Critique: Does this logo portray a web-based control for a media player?
1
Critique: Help with placement of logo elements in relation to each other for a web and app-based music service
5
C&C on a minimal logo that represents my name ("octopod")
2
Critique: iPhone Repair Poster
3
Design Critique poster
3
Critique: Balance titles on poster design
2
Does flat design typically have gradients?
2
How to effectively combat or response to the unfounded design-feedbacks?