I feel like whatever I transfer to Adobe Illustrator is loosing the concept's original features?

I can draw pretty cute thing that in my imagination would look good in vector format. But I'm just plain frustrated whenever I need to work with Adobe Illustrator and transfer my thoughts on digital 'paper'. Lines break when I click 'unite' in pathfinder, proportions are out from original, I need to deal with kinda different color feeling and often 'debug' rather than 'compose' type of workflow. How can I change it ? How can I become better ?

This is a problem with anything creative - the answer (alongside practice, practice, practice) is, at the stage where you are developing your idea, use whatever tool you're most comfortable with and don't worry about it being unpolished or imperfect.

It's about getting the idea down quickly and painlessly into a form where you can look at it, appraise it, figure out which elements work and which don't, play with it and see where the idea takes you. Designers often use a pen or pencil and a sketchbook for these early stages, making lots and lots of very rough simplistic sketches while improving and fleshing out the idea.

Then, several iterations down the line, when you've got a really well developed idea, bring out the difficult-to-use tools that will give the best final product and plan how to build it.

It's the same as how classical artists made lots of quick rough sketches to develop their ideas before they began thinking about technical things like mixing paint.

I love this squiggle diagram of the design process, by Damien Newman: 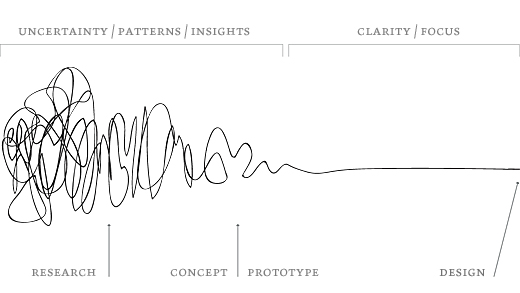 Most of the effort and time on a creative project is the squiggle - trying things, seeing where they take you, seeing what works and what doesn't, turning your idea into a better idea or a more real, more complete version of your idea, with the inevitable vagueness and wishful thinking beaten out of it.

Almost all of that is best done in quick rough sketch form, using whatever tool is most natural and least distracting to you - pen, pencil, charcoal, whiteboard, sketching apps - no software unless using it is second nature.

Then when you know exactly where you're going and you hit the straight line, you bring out the difficult to use tools that give perfect polished results (like Illustrator) - and even if you haven't mastered the tools yet, it'll be loads easier because your idea is now real enough that you can break it down into step-by-step chunks. What you call the "debug" workflow is okay at this stage because you've already done the "composing".

Some designers can sketch and do rough idea development in Illustrator, but most find it too unnatural and cramping.

Personally, after using Illustrator almost every working day for several years and knowing it very well, I sometimes launch straight into Illustrator - but only for simple routine jobs where I immediately know exactly where I want it to go.

For anything challenging and non-routine I'll take a step back and bring out the sketch book.

Even if I was a complete Illustrator master, this would be good practice - else I might subconsciously railroad myself, favouring ideas based on how easily they can be done in my favorite tools, ending up with formulaic work.