Printing a consistent grey: is that still a challenge with comic books?

In a documentary on the American TV series The Incredible Hulk (1978-1982, dir. K. Johnson, with Messrs. Bixby, Ferrigno etc.), the producer/director explains that he tried to petition Stan Lee to allow him to do a red Hulk because of the association with anger. More to the point, he reveals that Mr Lee explained the reason Hulk was green was because they couldn't do a good grey primer whereas they could do a consistent green. Obviously he's not talking about makeup but the comic book and this is consistent with the wikipedia entry on the Hulk.

Any reason why making a consistent grey would be difficult to do in comics - does that apply to print generally? And is that still a challenge today?

This site explains the process of coloring comics during the 60's (when the Hulk started) http://facweb.cs.depaul.edu/sgrais/comics_color.htm

The possible combinations of these tints gave colorists a palette of 64 possible colors to use in the books, though most used no more than half of them. Many of the darker colors were indistinguishable in print.

This is the 64 color palette they had to work with during the 60's. 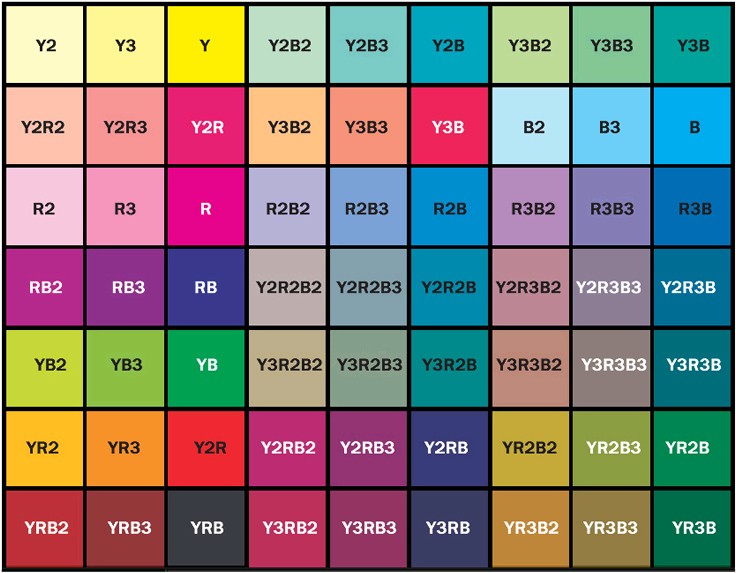 This is how they color them with color codes for printing. 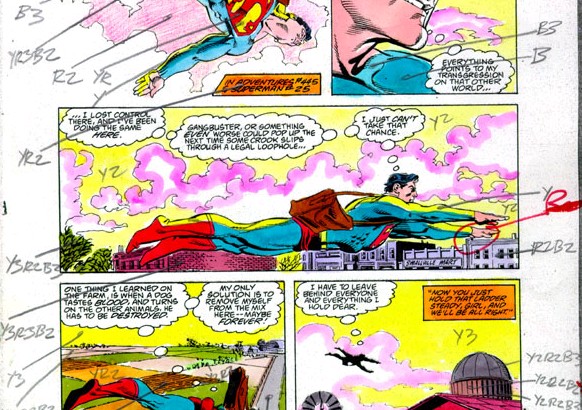 This is the part is where I speculate. If I am limited by those colors and I have to color the Hulk and make him stand out among rocks, concrete buildings, roads, night scenes - I would ask for more grey color choices or just make him green :)

It would also be worth noting the silo color in the Superman strip (lower right hand panel) the dark grey is created by laying down 3 colors Yellow2 Red2 Blue3 (Y2R2B3).

Also worth noting from http://www.comicartistsdirect.com/articles/coloring.html Comic companies on a tight budget were probably not willing to shell out the extra bucks for color proofs. The separators' work went right from rubylith overlays to the camera to shoot plates. That is why a plate is occassionally missing from a color in older comics.

A symptom of this cost-cutting is evident in the coloring process. The four-color separations and newsprint-esque pages in Marvel comics did not always bode well for certain color schemes.

One such color was grey.

It was not that comics could not use the color grey – they could. It simply wouldn’t come out the same way each time.

Therefore, when 1962’s Incredible Hulk #1 rolled around, Marvel had a problem. Dr. Bruce Banner is transformed into a monster called the Hulk by Gamma Radiation. The giant behemoth known as the Hulk is grey…but as you can see, the grey-coloring is far from consistent within the issue. Just compare this interior pages with the cover (thanks to H, from the Comic Treadmill, for the scans of the interior pages). 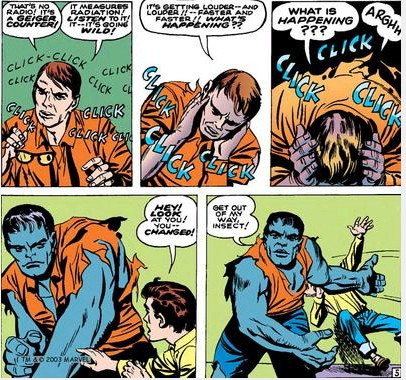 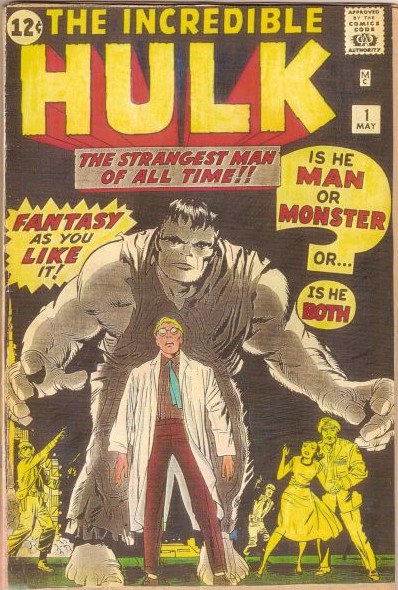 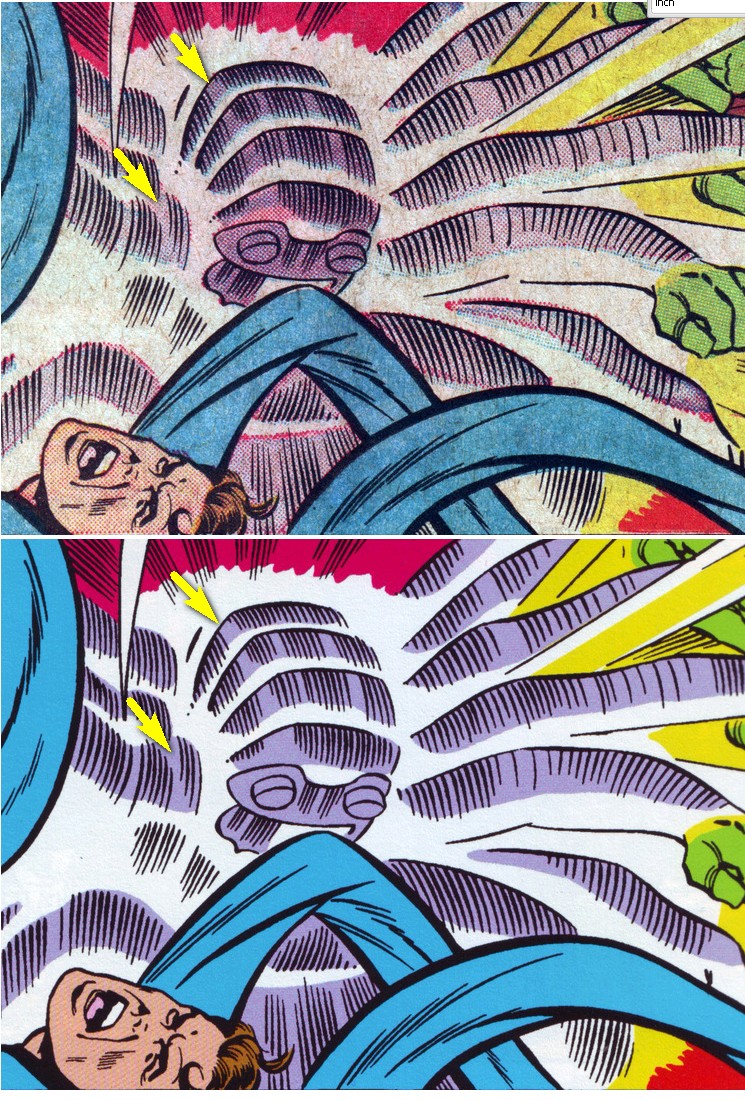 1) Unlike instruments, we perceive color in the context of surrounding colors. If you look at the grey bar in this graphic:you'll see that it appears to change its tonality depending on whether it's against the red or green background even though the grey is in fact exactly the same across its width. You may also see a slight shift in color. This optical illusion is called "simultaneous contrast."

Bottom line: Even if the grey patch in a color bar appears perfectly neural compared with the 50%K patch - the grey within the live image area may not appear neutral due to the effect of surrounding colors.

2) Our perception of color, especially neutral grey, not only varies from individual to individual, but is also affected by age and gender. Older men (e.g. typical press operator) will not see a 3/C grey vs a 50% K grey the same as younger women (e.g. typical print buyer). You can test this yourself with a chart like this one:On the left is the reference 50%K. On the right are a variety of 3/C greys. Try and pick out which one is identical to the reference grey. In fact, if you were to print out the patches, cut them into squares, and asked co-workers to match the 3/C patch to the 50%K patch you'll most likely see the pattern of men/women, younger/older, choosing different 3/C patches that they see as perfectly matching the 50%K one.

According to a report by Greg Radencic, PIA/GATF, on Spectrophotometer Device Agreement presented at a recent Splash technical color conference, out of seven spectrophotometers tested, four had a DeltaE error over 1.5 when measuring grey balance on 80lpb gloss coated paper. One instrument had a Delta E error of 1.75, another 3, another 4 and the last had a whopping Delta E error of 7 when measuring grey balance. The seven instruments were factory new and calibrated.

Bottom line: The measured match assessment of 3/C grey and 50% K is inconsistent/unreliable between different types of spectrophotometers. Even different instruments of the same model may disagree.

One final issue is that a chromatic 3/C grey (50C, 39M, 39Y) and an achromatic 50% black form a metameric pair. What this means is that they may match color under one lighting condition, however, under a different lighting the 3/C grey will shift hue because it is spectrally different than the 50% black. To illustrate:

Bottom line: Metameric issues can arbitrarily and continuously cause 3/C grey patches to mismatch against the 50%K reference patch as viewing conditions change.

Disclaimer: this is based on my assumptions of what the problem may have originally been--which in turn is based on common printing issues.

It was essentially newsprint.

This means you had to deal with a lot of printing inconsistencies:

To make gray, you can use black, but with a line screen. This isn't ideal on newsprint though as due to the large dot gain, the line screen has to be pretty coarse. So it becomes more of a noticeable pattern rather than a shade of gray. By shifting to a green, this allowed a bit more room for error. A black line screen can still be used for shadows and darker shades, but in addition there is also a blue and yellow line screen printed with it. Having these 3 colors allows for a bit more blending and consistency across the printing.

Bottom line, gray is a hard 'color' to work with when printing on low quality substrate. It's easier to use a color that requires multiple line screens to create.

Thanks to tls's answer, which provides this great link talking about the comic book printing process back in the day, we have a few more details on the limitations of gray.

Comic book color used to be done via hand separations. As opposed to modern technology, where we send a digital file to the printer which can have an infinite range of line screen sizes, hand separations requires a limited set, as otherwise it would be impossible to manage.

As the link mentions, to make hand separations viable, they had to limit the number of line screens that could be used. Based on the limited color pallette they could create with these limited line screens, it was decided that green was going to be the most versatile.

Oh dear! Much of what you have been told above is far from correct! In particular: The pics claiming to be from inside Hulk no. 1 are from a modern reprint, completely recolored from the original. The people talking about printing grey with small black dots or lines are way off the mark when it comes to Hulk no.1, way back in the early 1960s. The colour grey in 60s comics was always (well, nearly always) printed with a combination of the colored dots, not black. The Hulk was colored Y2R2B2 as per the color chart which one of your more sensible repliers posted, above. I know because I was lucky enough to take some microscopic photos of the actual comic a while back. My first pic was taken at 20x magnification. Hulk's hair (upper part of picture) is R2B2 (25% red, 25% blue) and his skin has the 25% yellow added. 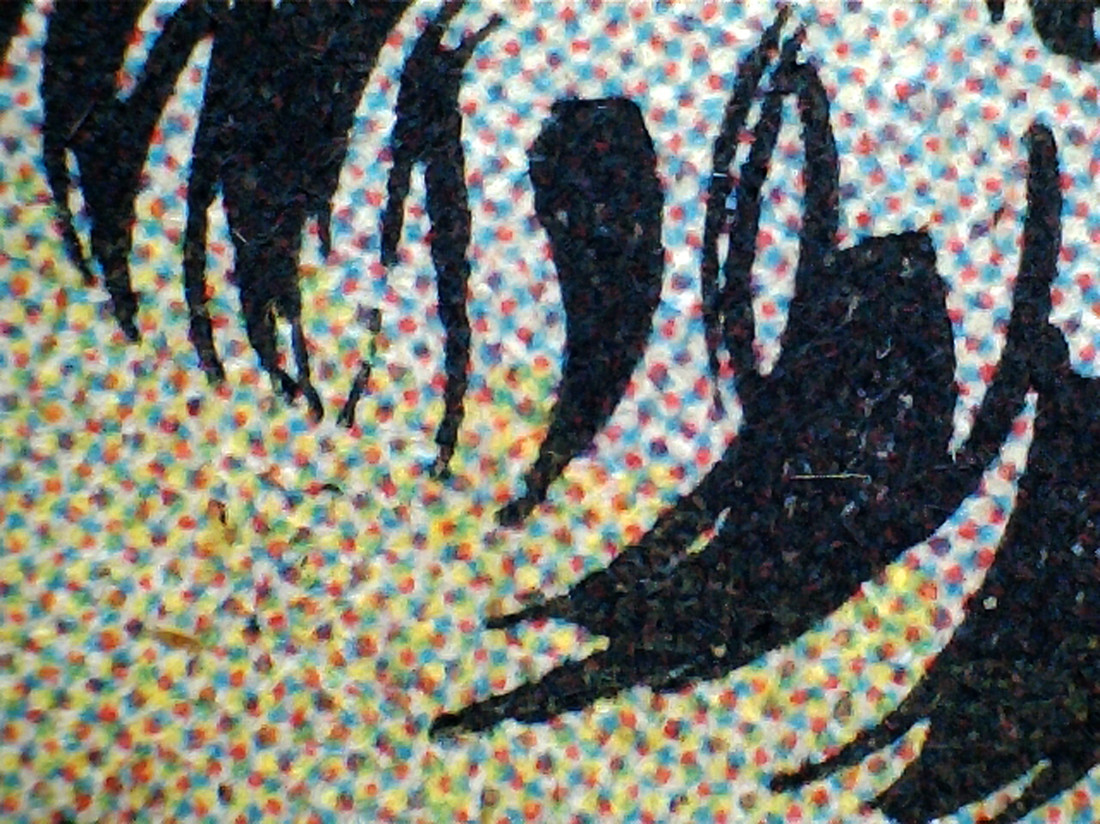 Next pics was taken at 400X magnification, from different pages. The yellow dots, in particular, varied in size quite a lot. (very variable dot gain in newsprint, as others have rightly pointed out) This made the grey a bit different fropm page to page. 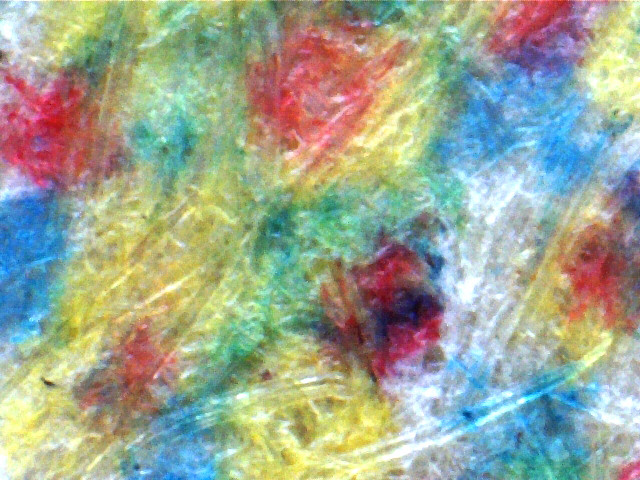 However, one of your repliers above is, I think, quite right: Hulk's grey skin color was not VERY inconsistent in the comic, but he didn't show up well against rocks, metal, at night etc. There was one panel where the colorist made him green. This was not an mistake but a bit of artistic licence. Hulk looked so much better in green! The colorist had apparently already asked Stan Lee if he could be green. Stan was persuaded I think more by the fact that the Hulk would show up better, be brighter... and look a bit less like a walking corpse, perhaps! He was after all a bit of a Frankenstein's monster, but not supposed to be all that scary!

Interesting - I hadn't heard of this before. I do know that comic books have tended to be printed on cheap "newsprint"-like paper and that may have an impact on ink coverages and how colors display. Red perhaps might look a bit muddy - perhaps almost brown-like - on such cheap paper. But then there's Superman which shows that reds are possible in comic books...

0
Grey is printing out grainy
2
File format standard for Printing Photo Books/Albums
8
How do I ensure that an image with a heavy color overlay will be visible in professional print?
0
Photoshop: working with dvd cover template provided by a printing company
3
Illustrator - communicating with printing company
0
Printing an Illustrator file that contains raster images with transparency?
3
Printing type with thin ornaments in light gray: tints of black or spot gray?
0
Should I convert a 2-color grey to a 4-color grey to get a consistent color when printed?