I have two compound paths that seemingly can't be merged together with any of the Pathfinder presets without loss or distortion to the objects.

This image represents the two objects in the Layers panel that have been joined into Compund Path's.

Currently I'm exporting the glyph to SVG by clicking File > Save As, then using the following export settings: 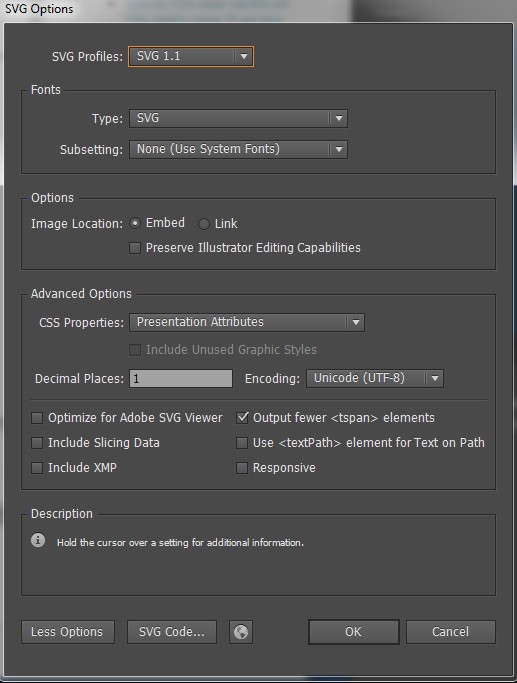 I've also tried probably 10-12 different approaches in converting these objects into Compound Path's before exporting to modify what is being exported to SVG, such as combining all into one Compund Path. But when I import the glyph into IcoMoon App the SINGLE LINE PATH's that have the 100 pt stroke applied DO NOT RENDER.

(What I mean by a Single Line Path is simply a Path that does not close (no fill can be applied).)

What do we need to do to get a Single Line Path to render when loading into IcoMoon?

Directly from the documentation:

"Strokes get ignored by the app. You can convert them to fills."

Typically if you're doing any work with glyphs you will want to export as simple a shape as possible. The fewer overlapping shapes and extra points, the easier it will be for a program to render it as you expect.

This is especially true when using something like an online font-generator where you don't know how it will operate internally.

3
Removing part of a stroke and adding a gradient to a stroke in Illustrator CS5
18
Merging separate paths in Illustrator
2
How do I join a reflected object to the original so there is no stroke running down the middle?
1
filter objects into separate layers by fill color in Illustrator
1
Convert Path in to editable Shape Illustrator 22
2
Adobe Illustrator: How can I change the profile of a dashed stroke?
1
Illustrator: How to trim of the edges of a line such that the line is aligned with the boundaries of a rectangel
0
AI combine objects - both compound path and pathfinders failed?
1
How do you avoid excel line graph lines being outlined on export