Drawing a double helix in Inkscape

I've seen this How can I create a double helix? question but I am here to ask you how to create a double-helix in Inkscape, instead of illustrator. I have tried to achieve this via creating two sine waves (using the Parametric Curves extension) and doing some cutting and colouring-in from there and this is what I’m at at the moment. After this I would create another sine wave with the opposite vertical orientation (which would be the second helix) and go from there.

This is what I have so far from the sine wave method; see in the first instance where I wanted to colour between the waves, the coloured area would form part of the helix.

I have also tried vectorizing a structure of DNA drawn using Accelrys DS Visualizer and failed pretty miserably: I find it impossible to seamlessly vectorize such complex raster files. See below for the original image if you have the skill to vectorize it in a way you could share with me I'd be more than willing to hear. I would like to know is there any better ways of doing this.

This double helix is the one I obtained using Accelrys DS Visualizer, with later GIMP editing (mostly in an effort to make it easier to vectorize, you may note that the helix backbone is no longer coloured in shades of white like it was originally).

I discovered another way to do it which was easier for me:

I have been "playing" with this kind of helix lately. I use a PHP library that I developed to generate SVG and the image I generate is SVG. If you talk about straight double helix, the solution is not difficult since it can be generated with my scripts and the helix is based on the mathematical expression:

(Edited 2015/12/17) I have changed the script and instead of PHP I am currently producing the DNA on HTML5 canvas. 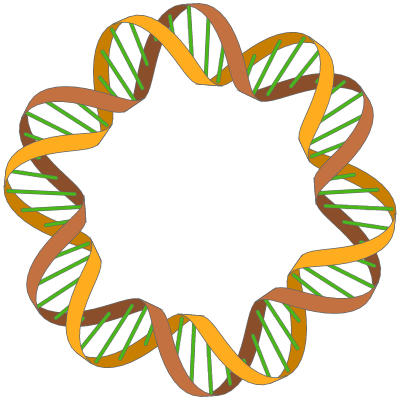 How scientifically accurate do you need this to be? If you only need an artistic representation, you can get away with something less complex and more figurative.

You could probably use the type tool and type out two "s"-es with a suitable font, convert them to paths, place them over each other appropriately and have the start of your helix that way.

37
Is math needed for graphic design?
5
How can I create a double helix?

4
Create a two headed arrow connector in Inkscape
4
How to twist a complex shape in Inkscape?
0
How can I create a shape based on contiguous color area in Inkscape?
14
Inkscape - Feynman Diagrams
2
How to create this coloured pencil effect?
4
inkscape - combine svg elements into combined path
5
Replicating a fantasy map coastline pattern along a path
2
Inkscape causing tool paths to be doubled/duplicated
1
Enhance line quality