How to make a hanging icicle brush or graphic style in Illustrator CC?

I purchased a set of graphic styles for Illustrator. The set contains a style that applies a hanging icicle brush to any object, so that icicles appear to be hanging from any horizontal line of an object.

I've decided I'd like to make my own icicle brush or style, rather than using a prefabbed one. However, I cannot figure out out to get an effect only to apply to the horizontal parts of an object, as the prefabbed one does.

How do I create a brush or style that creates hanging icicles from horizontal lines of a path, not on the vertical lines, and still hangs from the bottom of the object rather than pointing upward and into it?

Example below... I want the sort of stylized icicles I created for the 2nd example (not pink obviously, color changed to stand out against white for the example.. but I want the icicles to hang rather than point to the center of the object. 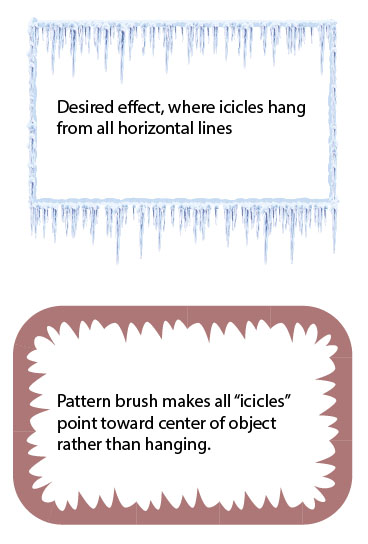 As Stephen Crawley explains regarding his icicle brushes, it's simply a matter of using the proper Scatter Brush settings. You need the brush to be relative to the page, not the path.

You can read Mr. Crawley's blog post by clicking here:

Not the answer you're looking for? Browse other questions tagged adobe-illustrator style brush or ask your own question.

2
Why is the paint brush painting in a particular layer style?
4
How do I make a radial gradient with "rays" from the origin, not circles?
0
Illustrator - stroke doesn't connect / brush pattern
7
How to overlap custom art brush shapes
1
How to fill in shape made with brush tool Illustrator CS6
1
Create an overlapping pattern brush that lines up evenly where the brush intersects
4
Illustrator: Pattern Brush that narrows down all the way?