Is it our task to teach people new scientific discoveries?

You know how a raindrop looks like, don't you? Well, maybe not...

While the German Wikipedia doesn't list that fact yet, it has reached the English version: 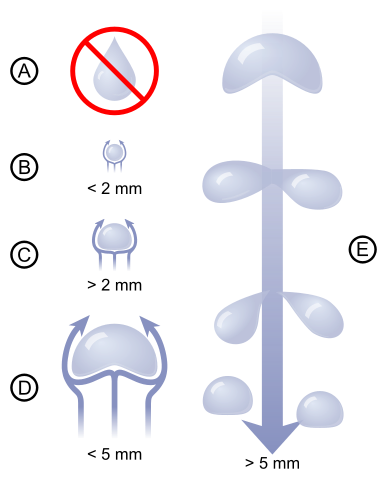 Whenever designers refer to rain drops or water drops, (A) will be used, which is inaccurate.

Is it also a task of designers to teach people new aspects of scientific discoveries by changing the design of icons or symbols? Has such a migration been seen before?

No, unless the work is for a scientific or technical publication. In that case, it would be accompanied by explanatory text, which a usual design would not. Since we're not going to be around to explain the weird shape you put in your design ("No, really. It's a raindrop!") to everyone who sees the finished piece, designers stick with what is recognized, not what is pedantically correct.

More generally, a symbolic representation of something is not intended to be a detailed illustration, nor is it ever accurate except by coincidence.

If you were to design a Valentine's Day greeting card, you would not use an anatomically-correct heart (unless you wanted to gross people out, but that's a different narrative). In the same vein, we use an envelope icon for email, a floppy disk icon for "Save to the device of your choice, which almost certainly is not a floppy disk", and we gloss over the fact that the sun on a bright day isn't actually surrounded by cute little radial lines.

Accuracy and recognition are not necessarily synchronized in the mind of the viewer, and if something is not recognizable then it won't mean anything to the intended audience.

The symbol a designer uses should communicate, preferably instantly, the concept the client is trying to get across to its audience, based on the purpose of the project. That's what he or she is being paid for, after all.

Not the answer you're looking for? Browse other questions tagged icon shapes symbolism or ask your own question.

140
New generation of Save icon that is not a “disk”?
6
New generation of 'Edit' icon that is not a pencil?
2
Pathfinder not accomplishing my task in Illustrator
0
Icon to best convey “Make a new post”?
16
How to make plot marker sizes for scientific plots seem consistent?
2
Best plotting symbols for scientific plots with multiple datasets
1
How to set object rotation as the new zero rotation
0
What style is the new Opera logo?
6
How I can make people collage in custom shape?