Is there a way to imitate a pencil or pen in illustrator?

I'm working with illustrations and I realized that it's easier to draw lines in Illustrator and combine them in Photoshop with other effects and textures. The problem is that I cannot find a way to make lines in Illustrator look like a real pen or pencil. Similar to how Graphic design is written on this website. Would be grateful if somebody can help!

From there, using a brush to draw whatever it is you want and applying one of the brushes should give you a pencil-like line. 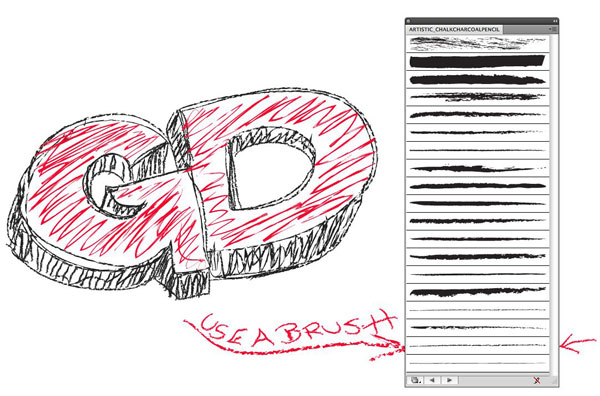 If you are working with existing shapes, you can still apply brushes to paths. For fills, the Scribble effect can do a good job as others have posted.

With a lot of practice and a great deal of care, you can probably get that hand-sketched look in Illustrator using the pencil tool and brushes, but that's an arduous way to go about it. It's not what Illustrator was made for, so you're fighting the tool rather than making it work for you.

What's fast is to draw by hand on paper, scan, and import into Photoshop. Or scan, bring into Illustrator and use Live Trace to convert to vectors.

Now, Wacom has recently come out with the Inkling, which lets you draw on paper and create layered vector drawings at the same time. I haven't used it, but people whose work I respect highly are raving about it. Adobe Ideas runs on Android or iOS and lets you sketch on a tablet and import directly into Adobe applications on the computer. At least one tablet out there already (the Lenovo Thinkpad) has a pressure-sensitive pen, and Ideas is able to recognize the pressure data and respond to it. Samsung had a demonstration tablet at Adobe MAX that was running Ideas and other Adobe touch apps in pressure-sensitive mode.

Not entirely. When it comes to both of these tools (pen to less extent) as depressed they leave not only thinner, but also lighter trace. That can't be easily simulated in Ill. Other aspects however are more or less achievable.

As for pencil/pen simulation, I'd go for calligraphic brush sensitive to pressure (I assume you've got access to pressure sensitive input device). Since this brush gives quite smooth results, you'll have 2 main possibilities to make it less "polite": 1 – scribble for it manually, 2 – after finishing your path apply "roughen" effect (you can also create "graphic style" binding brush and mentioned filter).

As for pencil I'd also try to create a brush based on scanned (1200 dpi or more as a base) lines made with actual pencil. I'd trace them and pretty much used as "artistic brush" right away or after minimal initial cleaning. You could also search the web for ready brushes of such qualities.

In some situations you can also "cheat" a bit (example: http://vectips.com/tutorials/turn-any-font-into-a-sketch-font/) by using roughen/scribble duet.

Here's a little example of drawing done with analog of calligraphic brush in Inkscape: http://thebodzio.deviantart.com/gallery/9931379#/d234h0q

Not the answer you're looking for? Browse other questions tagged adobe-illustrator vector drawing pen-tool sketching or ask your own question.

25
Learning to draw: start in the pen and paper realm or the digital space?
1
Confused editing 'lines' in Illustrator
1
Illustrator CC Snap to Grid with Pen Tool Not Working Correctly
3
Trouble with closing pen tool lines in Illustrator for vector illustration
2
Choosing a Graphic Tablet
0
pen tool makes a new layer every time i create a new shape in Photoshop cc 2017
1
(Adobe Illustrator) Pen Tool fills in lines
6
How can I draw dots in Illustrator?
0
How to remove unwanted color in illustrator
1
An issue with pencil tool in Illustrator 2019, pencil's default fill and stroke set to none, how to fix it?