What should be done with genuine vehicle registration plates in a photograph?

I have some photographs of vehicles that will be used on a website. I was previously planning to only blur out the registration numbers on vehicles not owned by the company, but it recently came to my attention that they'll be changing these vehicles and there's a possibility the old vehicles will be sold to a new owner.

I'm not really worried about any legal ramifications. I just want some sensible advice.

I can think of three options:

If you know of more options please suggest them. Altering the numbers/letters on the license plates for each and every photograph would be too much work.

What should I do about genuine license plates in a photograph?

Often it's easy to just remove a character or add one, thus making it an inaccurate plate that can't be found. I'll also shuffled the characters in addition to removing/adding one if I need the plate to still look like a plate. (no such thing as a 5 or 8 digit non-persoanlized plate)

Blurring or blanking works, but can often be a magnet for the eye since it's out of the "norm". It really depends upon usage.

That being posted, plates are registered to the current owner of the vehicle. When a vehicle is sold you should remove the plates if they are yours. Chances are if the vehicles are to be sold, they won't have the same plates for the new owner.

I prefer to add some detail to the site by removing what is there and using Photoshop to:

Just putting solid colors and blurring out the plate can be an eye sore on the design but adding subtle details related to the company adds extra value and shows you paid some attention to the images.

Either blur them or blank them, whichever is easier, but either way, make the characters unreadable. If they aren't custom to the company (like ECTO-1 or something), then they don't need to be on the website.

I generally edit it to look like an empty state plate if its a still image. For video work I just use a blur. Here's an example I happen to have open at the moment. 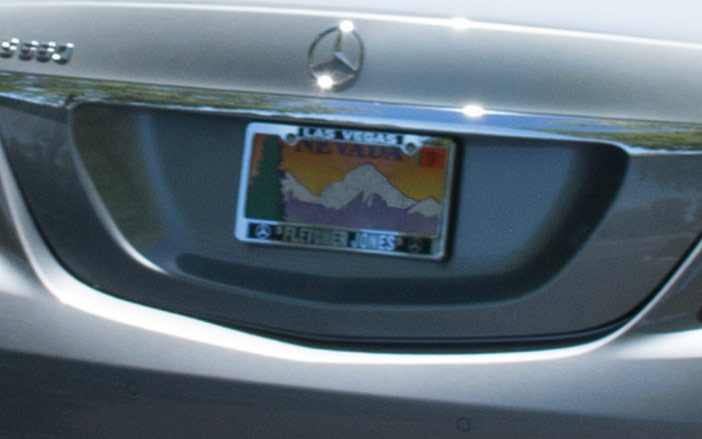 If possible and its going in a regional publication I'll try to change it out for a plate from that state. So if I were using the above photo in an advertisement going out in a Texas publication I'd try to replace the license plate with that of the Lonestar State. (And of course account for the decorate Las Vegas / Fletcher Jones somehow as well for consistency)

Disclaimer: I am not a lawyer. If you want legal advice then hire one.

In the UK (I presume you mean the UK because you said "vehicle registration plate") there is no law that requires you to blur out number plates. If a vehicle is publicly visible, either from or in a public place, then you can legally take a photo of it, and publish it, without anyone's permission, and no one can stop you. The same goes for people, and celebrities, etc. That's why the paps get away with it.

Luckily, we have some pretty useful laws which allow us the freedom to take photos of anything/anyone, in any public place (unless you act like a stalker or harass people).

Car number plates are designed to be seen publicly, and legally they can't be hidden on a vehicle - so if there is one in your photo, you are certainly not doing anything wrong by not blurring it out. Anyone can see that car number plate when it drives past or when it's parked on the street.

Those who do blur out number plates do so for various other reasons however. The press perhaps do so because they want to cover their backs, or want to appear to be behaving ethically. Others may blur it out because of privacy concerns, or out of fear of contravening European data protection laws (like google streetview).

I'd say the choice is entirely up to you. If you think someone will object, then just blur it out. It's perhaps best to avoid any confrontations.

As to the ugliness of a blank space - perhaps you could just add some random letters or a word.

Not the answer you're looking for? Browse other questions tagged photo-editing or ask your own question.

3
What do you call the parallax-like effect when panning or zooming still photos, and how is it done?
4
What should I do when scanning hand drawn images?
2
What filter settings to play with to achieve for tinted vintage matte feel photos