What shading technique/effect was used in this calligraphy?

Do you know what technique was used in this calligraphy? I would like to use Illustrator CS6 to achieve this look. The effect looks like glow in the dark. 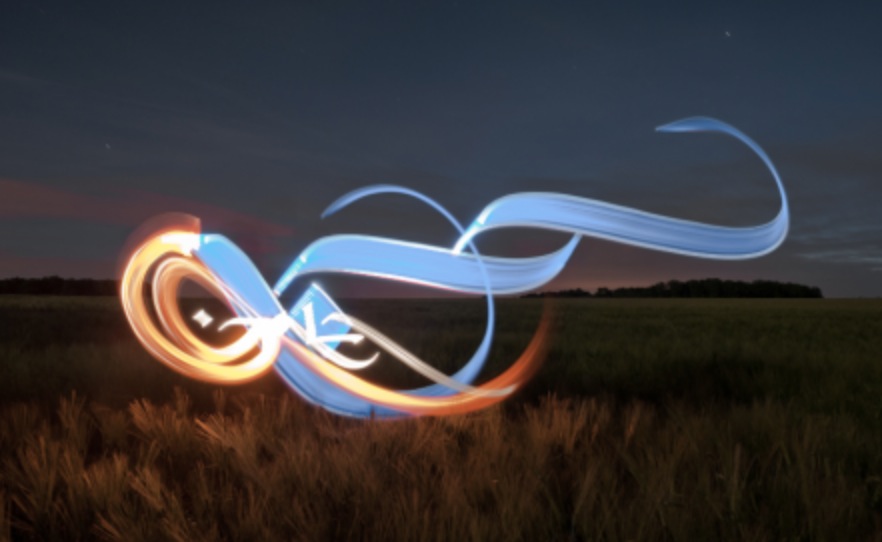 Scott is exactly right. This is a photograph and there was no editing done to it to make it look the way it looks -- this is straight out of the camera.

When a camera takes a picture it opens its shutter. During the time the shutter is open it absorbs light. The longer you leave the shutter open, the more light comes in.

In this particular photo the shutter was left open for a considerable amount of time.

A person, or multiple persons with lights then "painted" using the lights. These lights are handheld and can be flashlights, phones, glowsticks, etc.

The lines where creating by moving the light source around. This creates a streak of light. Stopping a line merely means turning off the light.

You can change the thickness of the light by tilting the light source so that it shines at the camera from a different angle. (Think about looking at your monitor straight on versus looking at it from the side, the shape of the light is different) 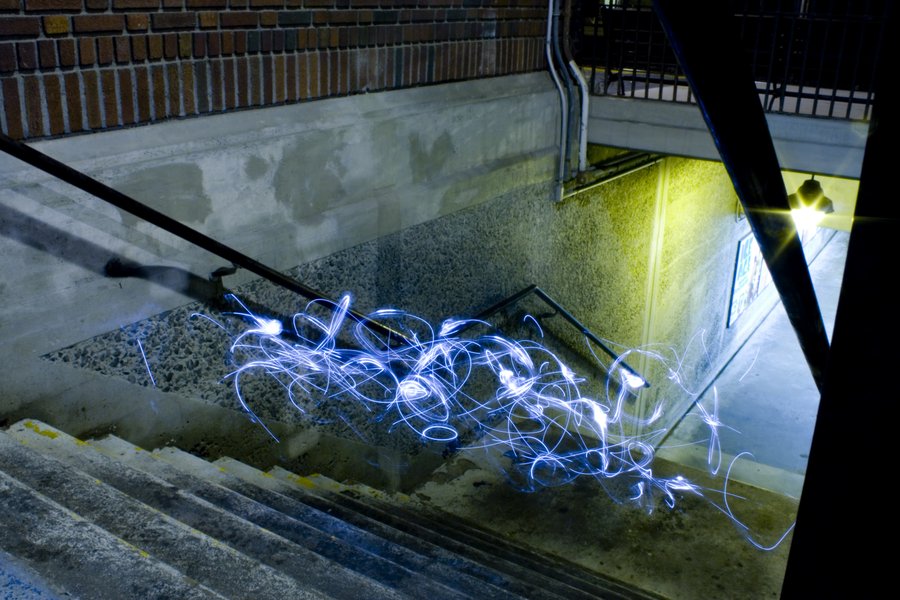 It was made using a flashlight.

There is no software involved, it's 100% photography.

Another way to think about this is as a motion blur, where when you move the camera while taking the picture, the whole picture is blurry. In this case you are moving something else while the camera stays still and it paints the blur onto the picture. The results of the picture you posted and the one I linked to are simply that of a "light blur" where a source of light covers distance during the exposure.

The shape of the blur is of course controlled by the person with the lights, enabling them to paint words, pictures, or abstract shapes.

Another thing to notice is that you'll usually see these "light paintings" take place in a dark picture (during night time, indoors) because taking them during the daytime would introduce too much light from the sun and ruin the picture.

The reason you don't see the person is because they are constantly moving in the picture, much in the same way the light is. The difference is that a person doesn't give off light, so they aren't captured as fast as the light source is. The longer the shutter is open, the easier it is to make a person disappear.

Here is an example photograph where you can see how a person's motion influences a long exposure: 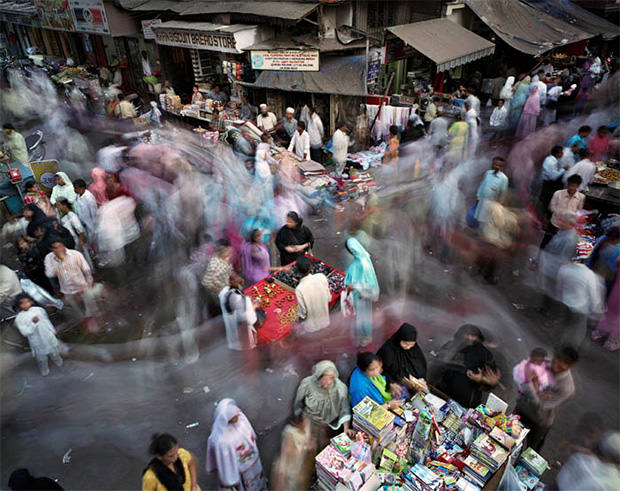 You'll notice how people who are standing still are captured more clearly than those that are in motion. Now imagine this shot were taken at night and the people were moving much faster -- they'd essentially become invisible.

This is a photograph.

By leaving a camera shutter open, sitting on a tripod, it's a common effect to use light to create interesting shapes with the long exposure time. A person moved around with a light and the camera picked up the light.

There is nothing in that image that is not part of the original photograph.

Though other answers are correct in describing light painting, there is a software/hardware combination available to predefine an image and then recreate using the light painting method. The product is called Pixel Stick

This product allows you to recreate specific images within a light painting by connecting the device to a computer and pre-defining the images to be created--as opposed to haplessly waiving a light around and hoping for the best.

In my opinion, this takes the "light painting" experimentation and art out of the medium, but the results are pretty cool.

Last January, Wired Magazine did a pretty cool article on the then active kickstarter campaign which raised over 1/2 a million bucks to bring the project to life.

Here is another link to a great review on the entire process...posted just a few days ago (March 9th, 2015).

It is supposed to be looked as light painting as suggested by most users. But in my point of view, it could be a mix (Digital Painting with some light painting).

Not the answer you're looking for? Browse other questions tagged style-identification photography calligraphy or ask your own question.

4
What is the name of the design technique based on dots?
6
What kind of illustration and how I can achieve this “effect”?
0
Can someone tell me what type of art style is this?
0
How to create this photo effect with photoshop
2
What style or technique do these retro images/font fall under? Not exactly UPA
3
Hands-on design: What material was used for this piece?
0
What kind of design style is this website?