Nesting Photoshop Smart Objects without losing the "link" between them?

I have created a text layer, converted it to a Smart Object, and duplicated the Smart Object twice. I then applied Stroke blending option to both copies and set their Fill to zero:

At this point, if I edit the text in one Smart Object, the change also applies to the other two - which is fantastic:

Now I want to apply Emboss and Drop Shadow to the stroke, so I convert the layer on the right to Smart Object and apply the effects. Note that it's now a Smart Object inside a Smart Object.

But, if I now edit the text layer, the change doesn't propagate to the nested Smart Object anymore. There are now two text layers which can be edited independently:

Can I somehow create nested Smart Objects while sharing the content inside the deepest object with other objects, so that my text editing propagates to all objects regardless of how deeply I wrapped them into other Smart Objects?

2018 update: To get linked smart objects in Photoshop CC, you have to cases: 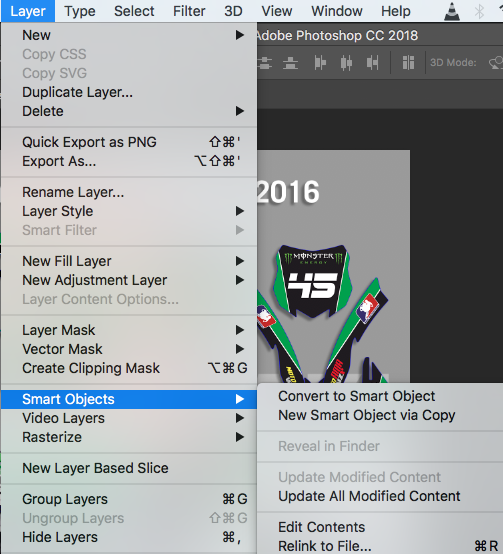 (you may set a hot key to faster these actions) 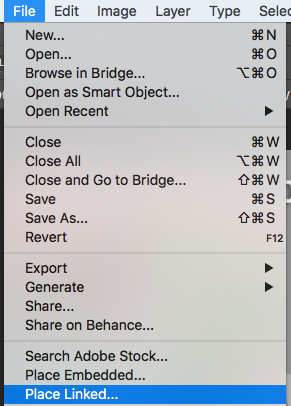 Smart Objects are plenty smart, but when you create a new SO, it isn't linked to anything else because it's, well, new. There are good engineering reasons for this, a not-always-visible set of considerations subsumed under "Managing User Expectations." The complexity of processing filters within filters within Smart Objects within Smart Objects would slow otherwise high-performing systems to a crawl, so the engineering teams don't go there. They know it's a trade-off, but there are many compromises between what they'd like to build, the resources available, and the hardware that marketing tells them it will have to run on. This is true of every release.

In this case, however, you can get there by using an Outer Bevel (which effectively applies a bevel to the stroke, rather than the zero-opacity text), setting it to "Down" instead of "Up", adjusting the size, picking a gloss contour that gets you in the ballpark and editing it to exactly what you need. If you've never edited a gloss contour before, you're in for some fun. Just click on the ramp, same as you would for a gradient, and a curves-like edit window opens up.

7
Disable link to copied smart objects
1
Creating an arbitrarily styled text outline in Photoshop which updates if I change the text or font?
0
One file with multiple linked files to one photoshop file

1
Photoshop: layer comps with smart objects
2
In Photoshop, is there a way to turn a vector object into a mask and keep it editable?
1
How to use opaque Smart Object as transparency mask?
28
How can I duplicate smart objects and make them separate in Photoshop CS6?
28
'Un-smart' object in Photoshop
4
How do I copy some smart object layers to another file and keep them linked
4
Auto-updating linked smart objects in files that were closed at the moment of the update
1
I want to change a massive amount of smart objects that are in groups and have effects on them. Stumped
1
Need two unique smart objects duplicated in one psd file