Where do you get your type inspiration or how do you decide on the right type? [closed]

Ask Question
Asked 11 years, 7 months ago
Modified 5 years, 1 month ago
Viewed 316 times
3
Closed. This question needs to be more focused. It is not currently accepting answers.

Where do you guys get your inspiration for type and how do you decide the right typeface for your projects? 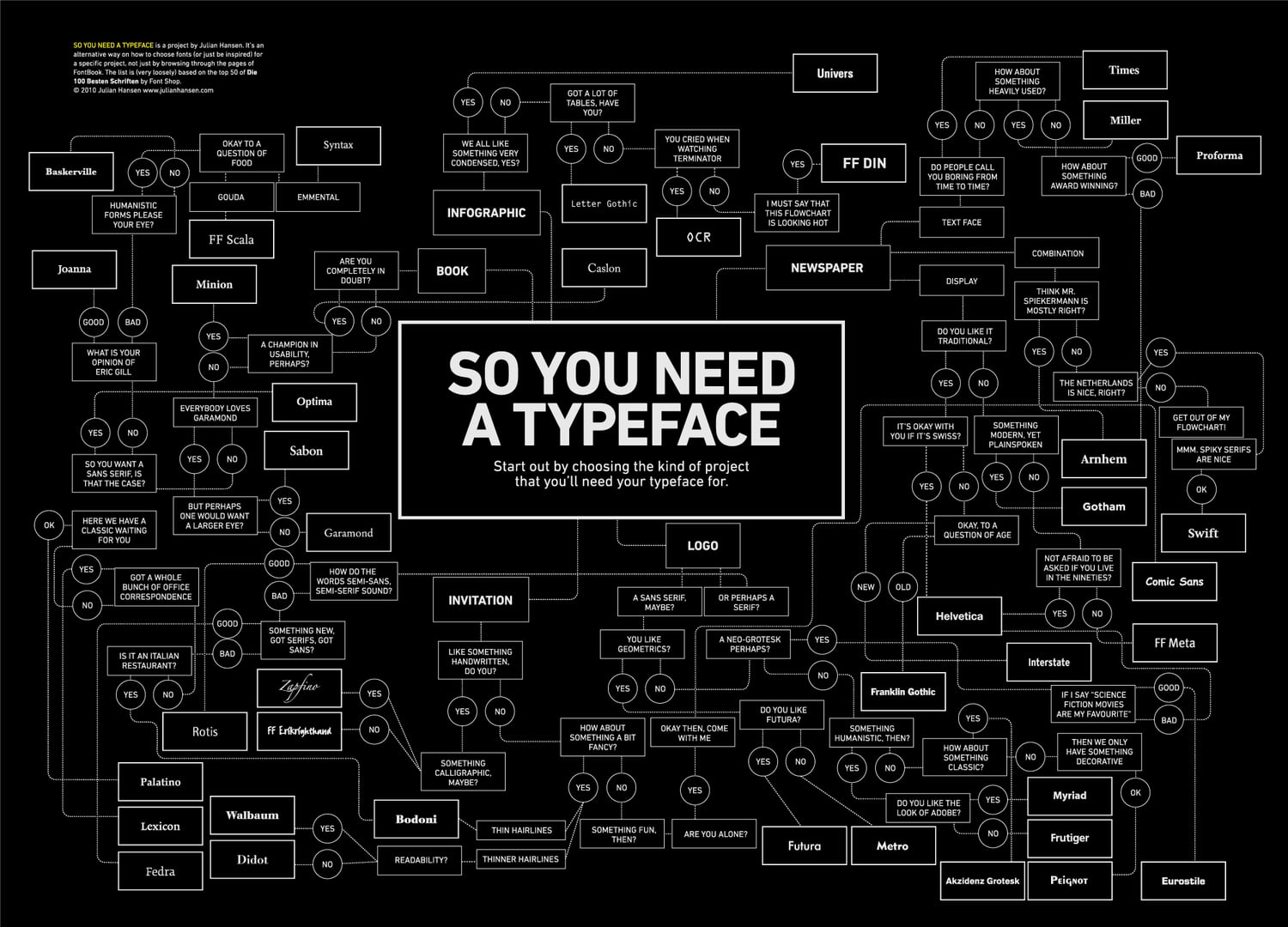 There are mountains of books and information on type choices and font pairings and it really can not be covered adequately on a simple Q&A site.

While the infographic in the other answer seems definitive, it is merely showing one person's preferences and is not the be-all-end-all. I really don't think it's possible in many instances to boil the design processes down to a series of "yes" and "no" decisions. It's similar to stating you can paint like Monet with the right paint-by-numbers kit. You can't. You may get an adequate result by following some set pattern, but it'll never be the quality of Monet's work.

But okay.. this is a very general, but my overall processes....

From here it's way more art than science. Any decision as to what specific typeface often comes down to the client, the message, the target audience, the brand to convey, etc. No one serif or sans serif typeface is correct or ever definitively appropriate in any usage.

If it's determined a serif is needed: What serif? If the message to be conveyed is one of a more friendly nature, then a Humanist Serif may be best. Humanist serifs include typefaces such as Jenson, Kennerley, Centaur, Stempel Schneidler, Jersey, ITC Stone, Goudy, Garamond, etc. Humanist serifs are generally more rounded and soft edged than their non-humanist cousins. And a humanist serif is generally more readable in nature due to the low contrast between the thick and thin strokes of the glyphs. (Meaning thin strokes aren't dramatically thinner than the thick strokes.)

Then after selecting a humanist serif.. what particular aspects of the typeface would serve the design best.... if there are large amounts of text and it is important to ease readability as much as possible, then it may be appropriate to use a humanist serif with large apertures. That is, a typeface where the counters in the o, e, a, d, b, etcetera are larger and increase the contrast between the strokes and negatives in the type. For example, ITC Stone has larger counters than something such as Stempel Garamond. Both are humanist serifs, but still quite different in this respect.

Okay.. so what if I need a sans serif? Well, again, message, client, branding, audience, and personal preference all play a large role in any type selection. For digital body copy a low contrast, higher aperture, typeface is still a wise choice, however humanist sans serifs may not be a good direction. Humanist sans serifs tend to vary in stroke weights a bit too much for body text in digital mediums - just my opinion, not a "rule". The varied stroke weights lower readability in larger blocks of text. So choosing a non-humanist sans serif for digital body text such as Open Sans or Roboto may work well. The consistent strokes and counters aides contrast digitally.

Then there are things such as callouts, headlines, sidebars, lift outs, pull quotes, etc. These can break the guidelines above. Digitally it may be fine to use a serif headline. And in Print sans serif headlines are fine, often desirable. The overall key is in the font pairing. When mixing a serif and san serif typefaces in a design you should factor in things like the geometry of the glyphs, the contrast of the different typefaces, the x-heights of the typefaces, that sort of stuff. Using a serif with a tiny x-height and a sans serif with a huge x-height may not convey the continuity desired. However, that dichotomy may convey the message very well. A very thin sans serif to offset a very thick serif may be just the "mood" one is shooting for.

And after all this.. there are scripts and display typefaces. When to use those and which ones to use again all come down to the message and usage. It's impossible to state when they are appropriate or inappropriate beyond, what I hope, is obvious - no script or display faces for body text, footnotes, disclaimers, etc.

And of course there are personal preferences beyond anything above. If one really dislikes what the glyphs in a particular typeface look like, such as Gil Sans, one never has to use it, even though it may technically fit given the general parameters of a design. Sure you can tell me Palatino works great in that design... but if I just do not like Palatino... I won't use it.

Type choice and pairing is really an art in itself all dependent upon the message the designer wishes to convey. There are no rules and only some general, loose guidelines based upon the delivery method. Beyond that, it's entirely up to the designer to find typefaces they feel work well given the specifics of any projects. Much like color, balance, white space... type is as subjective as any other aspect of design.

This is by no means meant as a definitely guide to selecting any typeface. Much like the infographic in the other answer, this is just my process and a peek into how I choose typefaces. I expect other designers to have a different process and ultimately come to different conclusions. It's the nature of design that no two designers will arrive at the same destination as they travel through the design process.

Not the answer you're looking for? Browse other questions tagged fonts typography typesetting typefaces or ask your own question.

2
Typefaces in which numbers look great for sale offers, discounts, price tags, and similar
6
Do you have a "formula" for the webfont vs graphic type threshold?
5
What are the historical origins of Helvetica?
10
How do you present typeface options to your team during a rebranding
2
Typesetting and book page layout using pen and paper
1
How do you decide the text direction when written in vertical direction?
2
Is the YYYY-MM-DD date format acceptable in print media? How do you typeset it?