Why do fonts appear blurry in Photoshop?

I'm just getting used to Photoshop and I can't figure out why all my fonts look blurry. 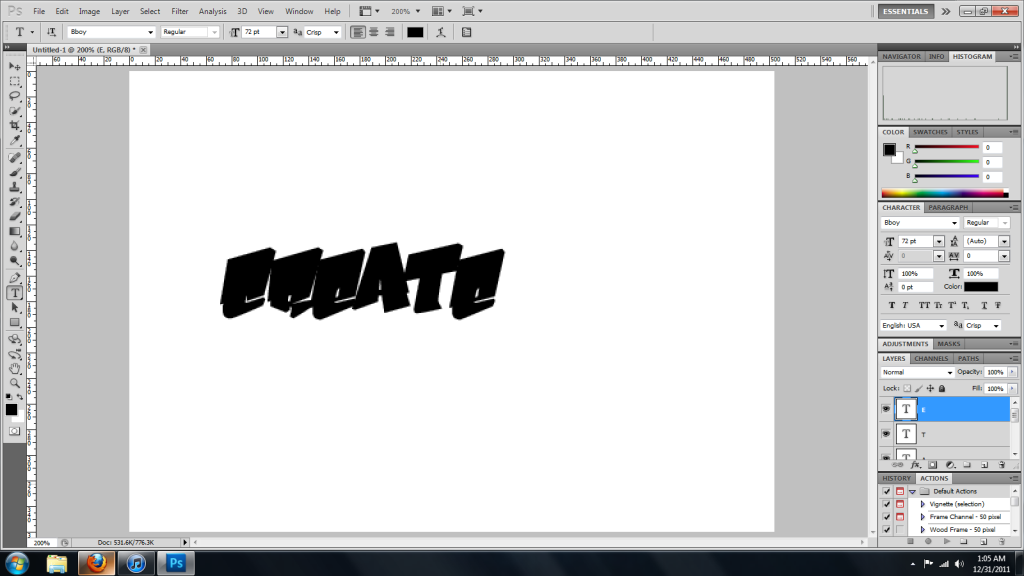 If you look at how it renders at dafont.com you'll see the same problem. It's not limited to Photoshop. It looks even worse in the OS font preview because, like many cheap fonts, it doesn't seem to have any hinting information at all.

You'll get a somewhat less obnoxious rendering if you use "Smooth" rather than "Crisp" for the anti-aliasing, but any typeface (or any shape, for that matter) with edges slanted at small angles is problematic for anti-aliasing at coarse resolutions. There are no exactly vertical or horizontal lines in this one; they're all sloped a few degrees.

You will always see this problem in Photoshop more than in Illustrator or InDesign, because Photoshop renders vectors and text at the document resolution, not the output device (screen, in this case) resolution that a vector-based application uses.

Follow Lèse's good advice and use a different (and better quality) font.

Rendering black on white without subpixel AA is especially difficult because there's so much contrast between the 2 colors that it'll either looked crisp but aliased, or AAed but blurry.

And then there's the fact that you're looking at your document at 200% magnification. So that's going to make the aliasing even more pronounced. Plus you're using a font that has very tight counters, so that's going to be problematic as well.

Your best bet is to try a different font that Photoshop plays nicer with and/or use a different foreground or background color. I personally avoid using AAed black text on white backgrounds in Photoshop most of the time for the same reason. If I need to use such a color scheme, then the text in Photoshop is usually just a placeholder for actually rendered text in a web layout that will be displayed with subpixel AA.

Following "Happy New Year To All"'s link, and then following another duplicate link on that question lead to me this question. In the first answer by Stefan Monov, he provides a link to a Photoshop action that tries to simulate subpixel rendering, by a series of clever blending with 2 additional layers.

I've yet to try this action out, but it looks promising. However, you really need to weigh things carefully before using this because, even though it might make the text look better in 99% of cases, it could potentially cause it to look worse if:

9
Text in my Photoshop image looks "blurry"
36
Why do some fonts make I, l, 1 look the same?
0
How to get rid of jaggered edges in Photoshop?
1
Why are the text and boundaries / edges of graphics blurry in this image, and how can I fix it?
1
Photoshop CC (for retina display) fonts blurry when exported to jpg or pdf
0
Why Is Placed Image In Photoshop So Blurry?
1
Photoshop linked object becomes blurry after shrink and transform apply
0
How can I resize a logo without losing quality?