What font characteristics are associated with luxury and wealth?

There's a lot about color theory but not as much about type theory. For example silver, gold, black, deep purple are often associated with luxury and wealth.

What charactertics should a font have to also be associated with luxury and wealth? Again, characteristics not looking for a specific font.

Some might say Script but that seems too broad, as this for example is far from luxury:

It's not just script though, similar explorations can be done with Serif fonts and Decorative fonts.

What characteristics make a font appear luxurious and wealthy? Are there also certain type treatments that can further associate type with luxury?

I want to be clear in that this isn't about what luxury brands use for their logos, but what typography characteristics CREATE luxury. To use hkaube's answer as example if I use a font similar to MARC JACOBS:

I don't think anyone would say WEDDING PHOTOS looks luxurious and wealthy despite being similar in style to how a luxury brand treats their logo.

While I agree with a lot of what has been said, I disagree with one of the fundamental ideas everyone else seems to have--there are certain characteristics and treatments that makes something feel luxury and wealthy. I'm not sure I know them all, in fact I'm sure I don't, but here's what I've been able to identify since posting this question and really thinking about it.

Luxury is often about the craftsmanship and quality of materials. This is a key point to identifying the characteristics. To elaborate, looking at the logos others have posted:

The main takeaway is that luxury doesn't scream it. Its subtle, sophisticated, and well crafted. It lets the type speak for itself. To further illustrate this lets look at some toy companies: 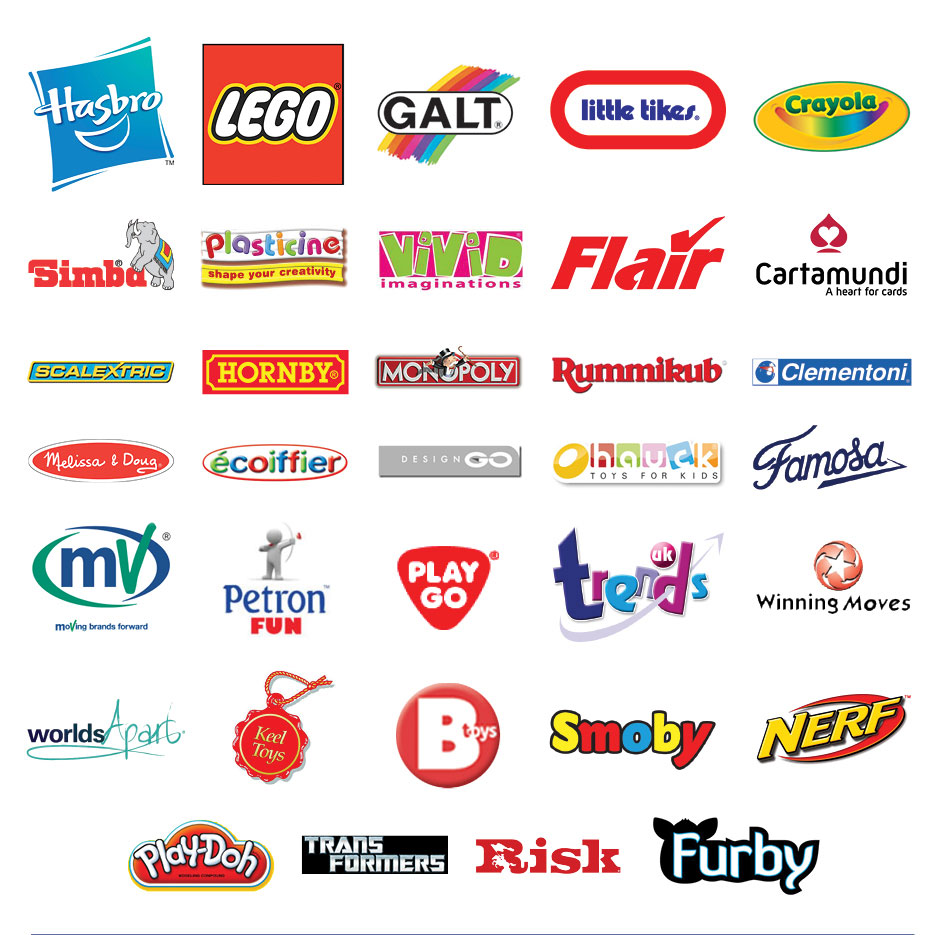 The type doesn't hold on its own. Spacing isn't as perfect, letters are more playful, angles and curves are used, colors not only around them but in the actual type, then there's shadows, strokes, gradients. As some pointed out the free space in luxury logos --- well its not just the free space but the lack of additional elements. Luxury isn't "minimal" but it is clean. These elements don't appear in luxury. Lots of rounded

Can think of it like food. A high quality restaurant uses the best ingredients and allows it to speak for itself. A typical lower end restuarant would be processed. The Toy companies are processed type, while the Luxury brands are the high end ingredients.

To user568458 joking in comments about Comic Sans being used in a luxury brand. We don't see it because of the playfulness in the characteristics. The curved ends, the tilted letters, the variations in horizontal lines. All of the reasons people hate Comic Sans MS are the same ones that don't lend it to being used as a typeface signifying wealth and luxury.

To scott mentioning Polo Ralph Lauren. Polo is the lowest end of their product line, their luxury brands are Purple Label (highest) and Black Label. Those logos are:

I happened to be reading an article that had this as its final point:

In art as in life, white space is the ultimate luxury. The most recent architectural addition to the Museum of Modern Art in Manhattan is a superb example of the way acres of empty white walls can be used to make a superlative statement On the page, white space works the same way. It signifies that you have plenty of room to spare. It frames images with an aura of accessibility. The less crowded a magazine layout, the more elitist is its attitude.

"The luxury of less."

One of the first magazine art directors to realize that a blank surface could have as much impact as a printed one was Alexey Brodovitch. His Harper’s Bazaar layouts in the 1950s treated white paper as if it was an electromagnetic field, with blocks of type and photographs charged with positive and negative energy.

Because of its upscale connotation, white space was vilified in the 1970s as too elitist. Only in the late 1980s did a handful of art directors, Neville Brody and Fabien Baron among them, dare to reintroduce white space in magazines, chiefly on opening spreads, to show off their typographical wit.

Source: The Object Poster, the Visual Pun, and 3 Other Ideas That Changed Design, The Atlantic, 12 Apr 2012

I think this offers some valuable historic insight into the use of white space by luxury brands.

Now there's always going to be circumstances where any classification of font can suit a luxury brand. But some font characteristics that I've noticed are:

There is no common characteristics in the typefaces used. Any typeface can convey luxury and wealth, it all depends on how the type is used.

Luxury brands convey "luxury" through use and message not any specific typeface. If you examine the work of some of the world's leading "luxury" brands you find there's practically no common characteristic between the typefaces used.

Just look at what Forbes states are luxury brands.... 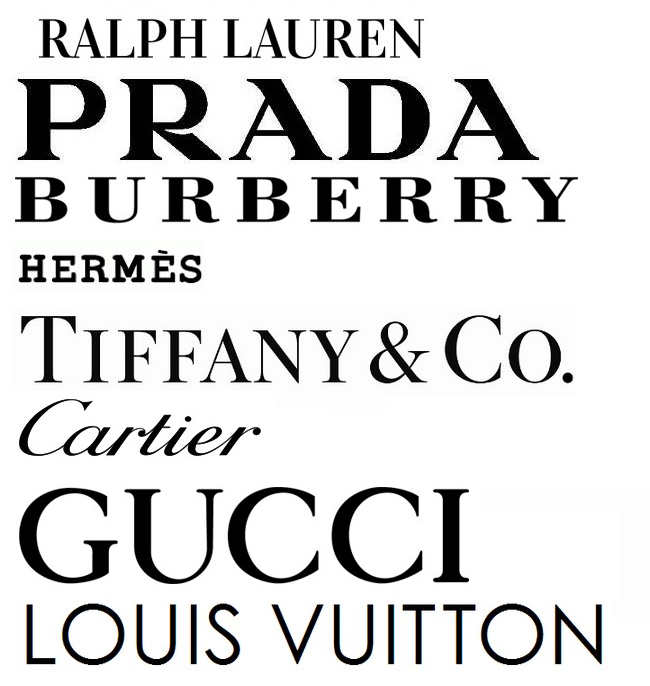 And a couple I think they missed.... 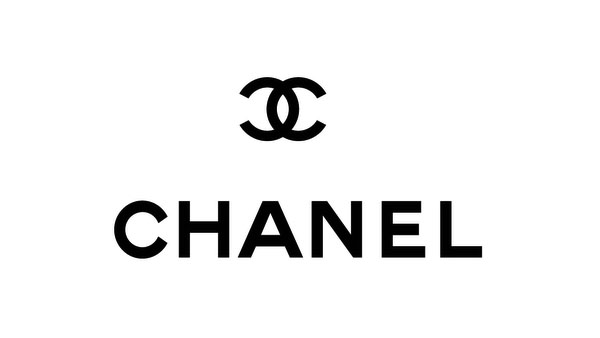 As you can see typefaces range from serif, to semi-serif, to sans serif. Including high contrast and low contrast stroke weights. There's no common thread to me.

If anything could be called common, it may be the lack of script typefaces. Although the Cartier italic may be borderline there, in the eyes of some.

What I find more important than any typeface is use of white space and color palettes in brand materials.

More whitespace is often a characteristic of higher end advertising or design. The more a page is crowded with content, the less "high-end" it appears. In addition, many high-end brands tend to restrict the overall color palette used in their advertising, often favoring a monochrome palette. This is just my observations though.

"I don't think that type should be expressive at all. I can write the word 'dog' with any typeface and it doesn't have to look like a dog. But there are people that [think that] when they write 'dog' it should bark."

Typefaces in themselves don't need to be expressive. It is how the type is used which will convey the message.

The answers so far consider mostly fashion items such as clothing, perfume etc. When you start to include other categories of goods you will see that the differentiation is not so easy. In fact I doubt there is any.

If I was pressed to say any one feature i would say: Conservative. It is not that clear cut though. Mainly the conservative stance has fact that many of these manufacturers are well established and their logos may be somewhat old. But also their logos need to work on many mediums, luxury being more than just the product but also the wrappers and surroundings. Therefore a luxury brand logo may need to work on many surfaces in many materials. This makes using black and white simple logo ideas as base easier.

Here some logos with graphic elements in them:

Images 1-2: The Ferrari logo in many ways differs form the Patek logo, just as the goods they sell.

Take the Ferrari logo which is more like a coat of arms. Colorful and has a symbol. One counter example of what has been claimed on this page to be the hallmark of luxury goods single colored, no symbol, lettering is modified with along stroke. The color range is playful, tough not shaded. The look and feel of the logo may in fact reflect the time when the brand was formed rather than any specific look and feel. Compare that to Rolls-Royce which has some similar aspect ration but totally different approach

So maybe the area where the brand is operating affects the look and feel more than them being luxury goods. So different companies have different take on the logo. But one thing is common luxury goods usually carter people in their 30' and up so they tend to be more mature in design, whatever that means.

Also note that brands are constructs of their time some luxury brands may have a quite youthful and playful feel:

Image 4: A luxury logo might not need any text at all.

What characteristics should a font have to also be associated with luxury and wealth?

It should have the characteristics of fonts that others use with luxury and wealth brands.

In other words, there's nothing particular about the type itself that makes is applicable to luxury and wealth, but rather how luxury and wealth brands have used type before is what creates the association. 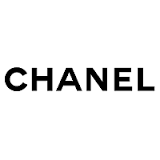 But, there's no hard-and-fast rule to this. What makes a font say 'luxury and wealth' is that it's used in association with a luxurious, expensive product or service.

I think the second one is Edwardian Script ITC and in this case it's the one which associated with luxury and wealth but the first one Segoe Script Bold is even not associated with luxury and wealth. It's important how people know fonts and how they remember. Observation and research needed to find out what concept, expression a font is associated. Usually I search for the fonts which used in magazines from different branches. For example Bodoni is a very popular font which used in fashion magazines and it associated with luxury but not exactly wealth. Also Edwardian Script associated with royalty or romance in my opinion and you can see it in some magazines about weddings. Also it's good know about the history of the font you are interested with it. It will be helpful to learn who designed and when, for what purpose.

Not the answer you're looking for? Browse other questions tagged typography type-theory or ask your own question.

1
Did I choose a good typeface to accompany my logo?

71
What are best practices for choosing and pairing fonts?
48
What font types are good for a technical document?
10
What are some typefaces to pair with Bauhaus?
4
What font and characters are used for the “line break” symbol used in Microsoft Word
1
What font style pairs well with geometric fonts and why?
6
Typefaces with specific legibility characteristics & licensing
8
What are sections with smaller body text called?
9
What are these fonts with connected holes called?