What style of art is Taco and Octocat?

I would like to learn more about creating logos and mascots in the style of Taco (of Trello) and Octocat (of GitHub). Simple, cutesie, almost as if cut out of construction paper (but not textured that way), as shown below.

Is there a name for this style?

And if you don't mind humoring me with an answer to a more opinion-oriented follow-up question, what sorts of tools would be suited for making logs and mascots in that style? Adobe Illustrator? Anything that can make SVG? 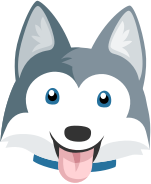 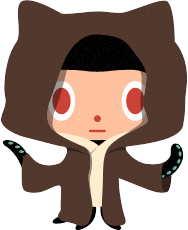 The only way you will learn is practice practice. Pay attention to how people create shadowing and effects but please dont knock off someone's style. Be unique and play around till you find something you like. If you are just starting out dont expect to be a jedi master in a few weeks. It takes experts years to become good.

what sorts of tools would be suited for making logs and mascots in that style? Adobe Illustrator? Anything that can make SVG?

Inkscape is free software that can get you started making vector illustrations.

There is not a distinct name for this style, but the style of these illustrations is endemic amongst vector illustrations. When a picture is rendered in pixels, it is called "raster". Raster images can get blurry or pixellated if you zoom in on them. Vector illustrations are different.Instead of defining the image by the location of colored pixels in a grid, it defines them through mathematically defined shapes. The result of this is that you can infinitely zoom on these, and never lose detail.

There are pros and cons to both mediums of image making. Vector illustration is common in advertising and graphic design fields because of the modularity of the designs. A vector design can be designed for a business card, and then relatively easily blown up and stuck on a billboard. That's an important quality if you're making a logo. Vector also has it's own set of limitations though, and that is part of why there is a distinctive "vector style". While vector images do not have to have this style, they often due to the natural limitations of the medium.

I would call it "material design 2.0." Material design is very two-dimensional and looks as though it could have been made out of cutting out little shapes with paper and gluing them together. Material Design 2.0 is similar, but there's a little more depth added by including typically an additional shade of each color. For example, the left side of the taco's head is a darker gray. Darker shades of red, white and pink are used on Octocat's face to imply a shadow cast by the cloak. Material Design 1.0 wouldn't have those elements.