Using Inkscape, I want to draw a inner gear.

but I want to draw a gear with tooths pointing to the center of a circle -- draw a inner gear:

Is there some tool, which will allow me to flip a tooths of outer gear around the circle, so the tooths will point into a middle of a circle? Or, how You would draw such shape?

I'm able to create realistically looked image, but I need to draw a series of gears, which will be used in animation and my approach has several drawbacks, which will heavily complicate my quest. 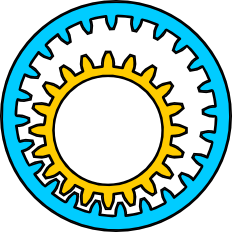 But this approach has one big issue. You cannot easily adjust the diameter of gears, because by stretching the gear, you are also changing its involutes.

Is there a way, how to use some oject as a stroke for another object?

Imagine I will have one involute used as a stroke of two circles. I can then change the diameter of the circles without changing its involutes or change the involutes of both circles by simply modifying one underlying involute object.

I'm a little perplexed by the complexity of the answers that have already been provided. Can you just cut the shape of the gear out of a circle?

This will cut the shape of the gear out of the circle. Is this not what you were trying to accomplish?

Note: If you want to make a gear that will fit this shape, copy the original gear first and set it aside. Change its path to inset (Path > Inset) and it should fit. If you need more control, play around with the stroke width, even using a white stroke.

7
How can I create WORKING gears in Illustrator?
6
Cut a circumference into parts - Inkscape

4
Inkscape: how to reuse part of a circular path (inner boundary) and connect it to another path inside of that
1
Is there a 'Remember Selection' tool or option in Inkscape?
2
Inkscape: Drawing a perfect circle in 2 point perspective
6
How can I draw a loopback connector using Inkscape connectors
2
Inkscape: cutting / trimming inner line
2
How to draw a hollow line with arrows in Inkscape?
1
How to apply a stroke only to the selected nodes in Inkscape?
0
How do I trim the edges of a complex shape in Inkscape?
2
Inkscape - Concentric closed paths?
3
How to ungroup and conduct Path-Difference on multiple objects in Inkscape?