Can Inkscape be associated to SVG as the primary tool of the trade? [closed]

Ask Question
Asked 9 years, 3 months ago
Active 9 years, 2 months ago
Viewed 654 times
0
As it currently stands, this question is not a good fit for our Q&A format. We expect answers to be supported by facts, references, or expertise, but this question will likely solicit debate, arguments, polling, or extended discussion. If you feel that this question can be improved and possibly reopened, visit the help center for guidance.
Closed 9 years ago.

I'm planning to make an icon to represent SVG. I know there are official logos, but I never saw them until I looked for them, and I don't believe many designers associate SVG to these logos.

My icon design would be based upon the idea that (if the viewer ever worked with an SVG) he/she would associate the concept of an "Inkscape document" to SVG, by borrowing a few items from its logo: 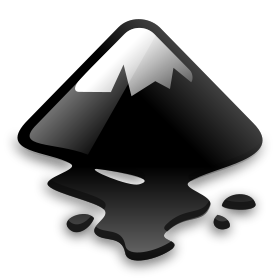 So my question is, if you use/used SVG, would you associate Inkscape to SVG? Or maybe you used another tool, and an "Inkscape document" wouldn't ring a bell to you?

There are more than one tool for making svg document + you can write it as a code. I use Inkscape primary and that icon is for me "vector graphics" not only svg. Many graphic designers don't even heard that there are something like Inkscape. Professionals mainly use Adobe Illustrator for vector graphics and for export to svg.

As svg is not yet mainstream: nor on the web neither in professional graphics. I suspect that inkscape is used for editing most of them. Your proposal definitely should make sense to people familiar with svg.

But I believe that a free file format shouldn`t be associated with identity of particular software. For reflection: it can be annoying to see adobe acrobat logo on every pdf, especially when you use alternative viewer, even if it rings a bell.

I don't think it is a good idea to use the inkscape logo as a base but you could perhaps abstract some ideas from it, like the mountain of flowing ink and make a new logo based on this idea? If you use the same colour scheme and a similar style, it should be recognizable to SVG artists.

The official SVG logo sucks and should not be used IMO.

Justinas brought up the example of PDF, which is a good example. For years, PDF was the format of Adobe exclusively. Other tools developed later on, but that format is still known as "Adobe PDF", and Adobe, to this day, holds the patents for PDF. The Adobe PDF logo is the official logo for PDF: http://www.adobe.com/misc/linking.html

I don't think Inkscape logo can be used as-is, but perhaps as part of a separate SVG logo. My advice would be to create the logo from a stylized form of the letters SGV as this is the only think I can think off that actually communicates SVG and then add the Inkscape logo: 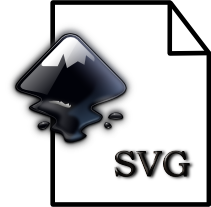 (Of course, make it nicer, it's just an quick knock together.)

Not the answer you're looking for? Browse other questions tagged icon logo inkscape svg or ask your own question.

4
How can I trace the edge of a svg file using inkscape without rasterizing the image and re-vectorizing it?
7
Can I export an Inkscape SVG to a TTF file?
6
How to create proper Vector Images that can be used as an Android Vector-Drawable?
1
Inkscape svg in HTML
1
Inkscape : Exporting SVG to different icon sizes
3
Crop SVG with Inkscape
0
Can I drag a node without breaking the edges in SVG file in Inkscape?
1
Remove the blank space around the .svg image using Inkscape