I have a file that was built by another designer. Part of the file has a jack o lantern with thick black lines. I see the thick lines just as they should be on my screen in illustrator yet no matter what I do when it is saved out any other way, the thick lines vanish. I have saved it out as the smallest file size PDF and the lines are not there. I have tried printing it directly from illustrator and even on the print preview the lines are gone. I am at a loss here. I have never run across this before. Any suggestions?

Have a look at the layers and see if the lines are on a separate layer that is "no print".

You can see this by looking at the layer's option and verify if the "print" box is checked.

To see the layer's option, simply double click on the layer and a small window should appear. Usually, when the box "print" is not checked, what's on it will not appear on the print preview and will not be printed. 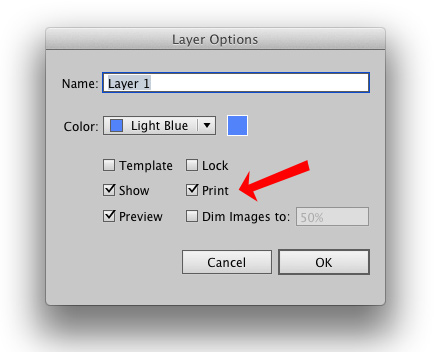 In the older versions of Illustrator, if I remember well, there was a "knockout" option on the "attributes" panel. In printing, "knockout" creates a white shape where applied and that could be what's happening there. It should be applied on white elements only. The older version of your vector file could have retained some trapping features. From what I remember, the files using that knockout were showing all the graphics fully visible on screen but the knockout graphics would disappear once printed or encoded in postscript.

Maybe you could play with the "overprint" checkbox on/off it could reset or remove this if you're using a new version. It's in the "attributes" panels.

The "knockout group" option can also be seen on the "appearance" panel when selecting your elements OR on the "transparency" panel if you show all the options. I don't use the knockout there but from what I can see it doesn't do the same thing as it used to do (eg. real postscript knockout trapping). Have a look there, might help anyway.

I don't think this is the issue since you're using black, but if your graphic is on a darker background (rich black in your case) and the lines/filling are using "overprint", they will "merge" with the background.

You can verify the "overprint" in the "attributes" panel and uncheck these boxes if they are checked.

Not the answer you're looking for? Browse other questions tagged adobe-illustrator print-design save line-art or ask your own question.

1
Trying to export PDF from Illustrator, but gradient (Black to Transparent) not printing Transparent
17
What should be considered when using very thin lines on a print piece?
0
Illustrator - Large Vector File to Print at A0
2
How to prepare a design document in Corel for UV printing on glass
2
PDF saved from Adobe Illustrator CS5 not displaying correctly in Apple Preview
0
Text anomaly on PDF print?
0
Images resizing when printing through photoshop to printer
2
Saving PNGs in Photoshop—compression specific question
2
Making a logo file print ready for embossing without having spoken to the printer
0
Illustrator CC 2018 Tracing not doing what I need to convert this BMP to Vector?