I'm unsure whether this is the right place to ask this kind of thing but honestly, I'm at wit's end here, so I'll try anything. Feel free to migrate or edit.

In a font I recently bought, a glyph is too small for my liking. I therefore decided altering the glyph slightly to show a longer extension from the baseline (I hope it's clear what I mean with this).

After doing some research, I have the following software at my disposal for changing the glyph:

To check how the new font looks, I also have trial versions of

(The final product is to be a math font for use with the TeX typesetting system.)

Editing any font is correctly reflected in both pieces of font editing software (Studio as well as FF).

However, something strange happens when I check the font in the font management software. FontExplorer does not show the edited glyph, while Suitcase Fusion does show the new glyph. Converting the OpenType file to readable font metrics for my typesetting software, the wrong glyph shows up in the glyph table.

I've already tried changing the font cache, reinstalling everything (Windows included), or trying different fonts, glyphs, and so on. The problem persists.

For reproducability, consider Comic Sans (which I believe comes with any Windows distribution): a TrueType-flavoured OpenType font. I can change any glyph, say the capital letter A. To edit the glyph, I open up FontForge¹ and double click any glyph. I move an anchor point to a random location (you can change two anchor points to be sure). Afterwards, I save the font as a FontForge file (just to be sure) through File → Save as... In the new window I can save the font as say, comic2.sfd. I then export/generate the font through File → Generate Fonts..., where I'll select a fontname, say comic2.ttf, where I'll set options: TrueType, No Bitmap Fonts and No Rename. I only force glyph names to Validate Before Saving. I have not changed any settings in FontForge, so the Options window just shows defaults.

After validating, an error shows up saying that “the font contains errors”:

I'm unsure what these mean, but I tell FontForge to go ahead anyway, so I clicked Save.

¹ tried several releases, but I tested most with the latest release as well as the July 14, 2012 release.

I have resolved the issue, the culprit was the font's PostScript name (which I naively never changed). I'm guessing it has to do with the caching of fonts based on PostScript names or something. I don't understand it exactly.

The window that now appears has a "Names and Copyright" tab (It's the first tab that opens in my version of Studio). Change the PS font name to something that hasn't been declared before. 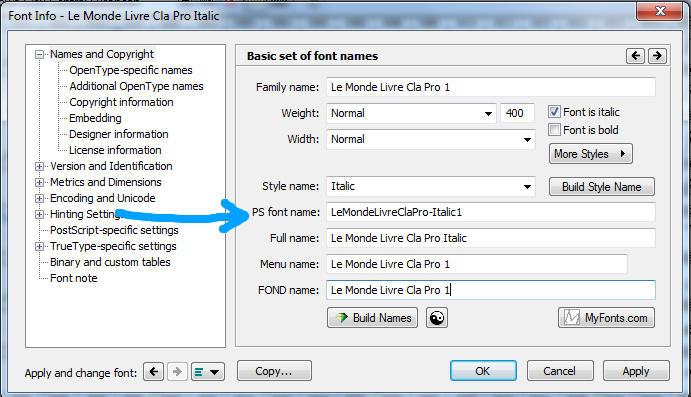 The font with the new glyph now shows up everywhere, including my typesetting program.

A font file usually contains only vector information on the shapes of glyphs. Some fonts also come with so-called bitmap strikes for different font sizes though, which are usually hand-corrected for the best rendering. I guess that you have such a font and only changed the vector information while the bitmaps are unchanged. In some programs you now see the bitmap strikes and thus show the unchanged glyphs, while other programs render the vector data and show the changed glyphs.

If I am not mistaken, you can remove the bitmap strikes in FontForge by going to element → bitmap strikes available and remove all point sizes. Here is the respective manual entry.

Apart from this guess, I have no idea. I did something like you describe several times on Linux and encountered no problems.

Not the answer you're looking for? Browse other questions tagged fonts fontlab-studio font-forge or ask your own question.

30
Is there any open-source alternative to Fontlab out there?
3
What's the technical term for groups of glyphs in an OpenType font?
2
How to improve font rendering at small sizes
10
What advantages/disadvantages do specific font formats have for print production?
3
Generating font files from SVG files
1
How to reduce the vertical bounding box of a font?
3
Creating final forms with FontForge
7
A font with custom ligatures (for music)?
0
FontForge is cropping my font at the bottom and reversing changes to ascent and descent heights
2
Ligature glyph bearing rendered incorrectly - FontForge - OTF font