How to stop a brush from darkening the color of a previous stroke? 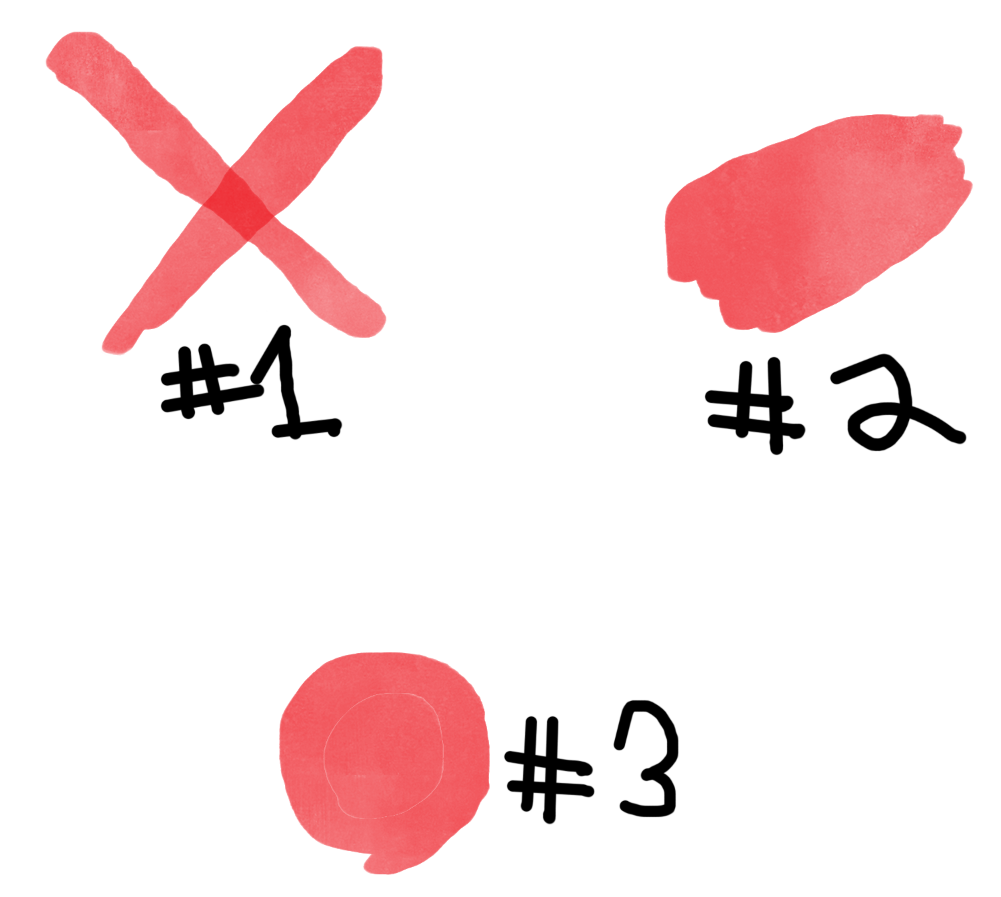 In the image above, I showcase the problem.

I have some marker brushes that have a nice texture on them which shows the tooth of the paper. I'd like to get a more consistent look when I'm coloring in an area, but when I go over the same area in more than one stroke, the paint darkens (Example #1). In example #2 I went over the same area, but within the same stroke. The color stays consistent in that case. This is the effect I want, but with multiple strokes. In example #3 I tried fixing the problem by selecting the area around the initial stroke with the magic wand and painting it in, but that leaves a white outline over the original stroke. Expanding the selection by 1 pixel results in a dark line between the strokes.

So is there a way to solve this problem so that I get a smooth, consistent look with multiple strokes, like in example #2 Where I only use 1 stroke?

You're using a Brush that has transparency built into it. There's no way around that effect as a result without opening the .abr file and adjusting the opacity of the stroke which would defeat the purpose of using that brush to begin with.

For example here is a Watercolor Brush on white background: 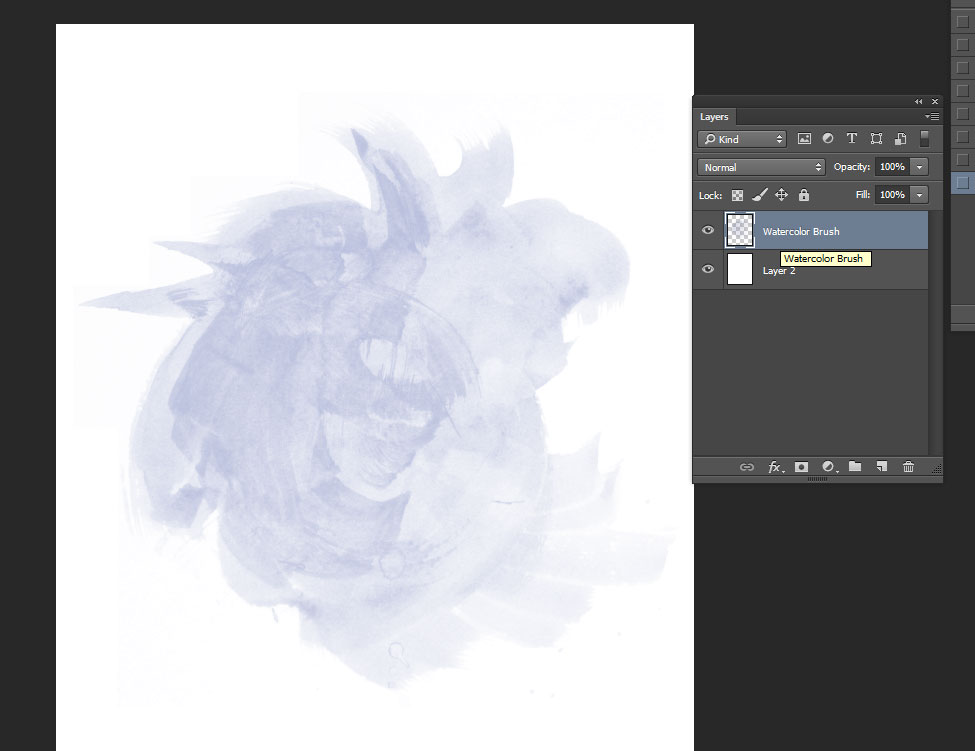 If I remove the white background even though the brush flow and opacity is 100% you can see it contains different levels of transparency within the actual brush: 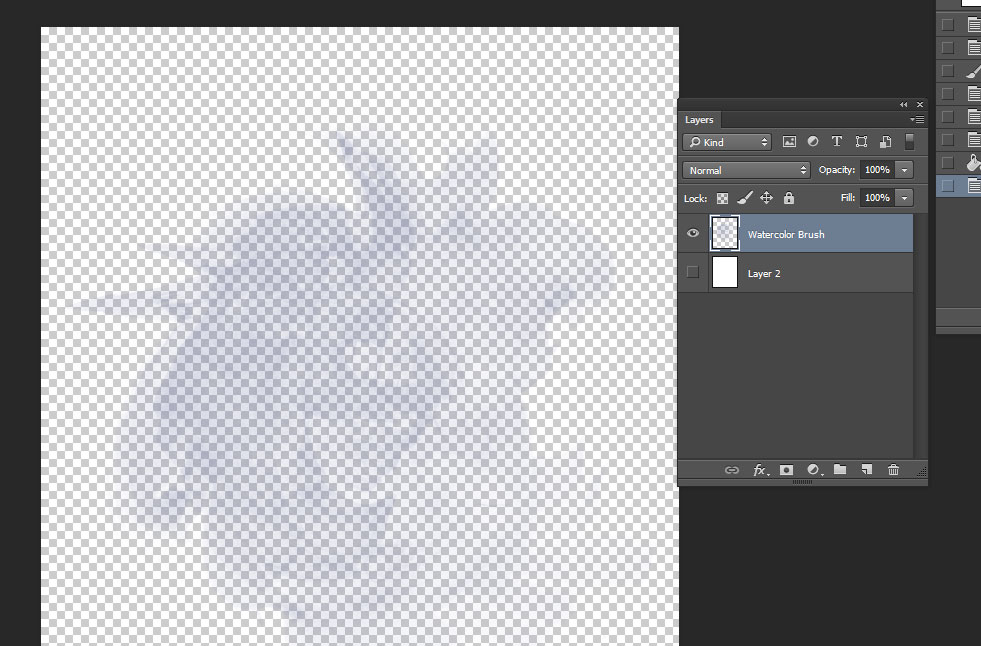 Your best bet is what you did in number two combined with masks to control the form.

I had good luck using the airbrush setting on my paintbrush: 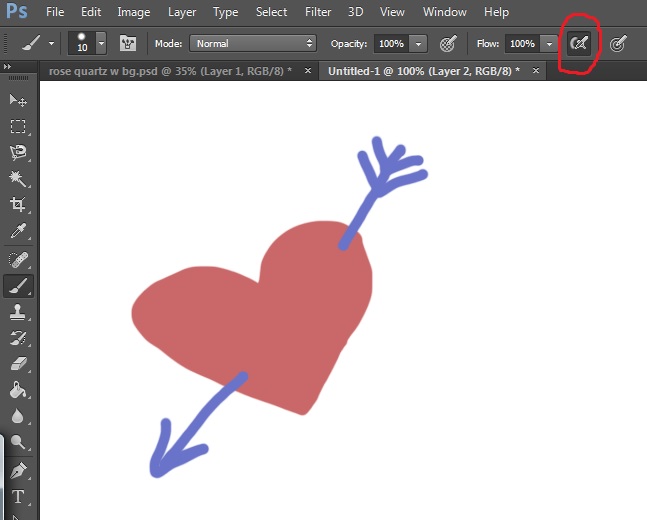 Might not be the be-all, end-all solution, but it's worked so far for me.

Well I had the same problem but its not related with the op or anything.When you to go the brush presets there is an option called wet edges if its marked brush will overlap and if not it will give u the pure color hope that helps Peace

Try turning off pen pressure for opacity (located next to brush opacity) and wet edges (in brush panel). This should keep the opacity brush strokes consistent, which should solve this problem. Hope this helps!

I actually ran into this problem: checked my opacity, multiply effect on brush etc. turned out I had a "curves layer" laying on top of everything (with each layer ordered in "pass through"-folders) incrementing the contrast for each layer. So stupid yet easy to overlook.

This problem annoyed me for a long ass time. Just now I found the ONLY solution:

FINALLY I frickin found it !!!

Make the brush flow equal to 100%. This is on the top bar beside the size, opacity, and other settings. If this does not work make sure your opacity is up to 100%. You can try making a new layer and painting your next stroke on that layer. Attempt to put the blending mode on add if this does not work still. Keep troubleshooting.

i had the same problem, after i recognized my brush painting mode was on "multiply" instead of "normal" . After I changed it everything was ok.

Not the answer you're looking for? Browse other questions tagged adobe-photoshop color painting or ask your own question.

2
"Darkening" a colour so that it's equivalent to the original when made transparent
1
Preventing adding up of colors for multiple brush strokes
3
Best way to design map markers based on their 'heat' parameter
2
How to add an outline to a layer that acts as a mask?
0
Difference in Applying of brush strokes between the real world and the digital art world
0
How do you make a selection based off a lower layer in Photoshop?
6
stroke of multiple color vs single color
0
New brush strokes keep changing the opacity/color of previous strokes
0
how to stop color overlap (bleeding) when filling second time with magic wand select in Adobe Photoshop