How do you say “Layer” in Chinese? As in photoshop layer

I'm setting up graphic designs that will be printed in mainland China. Some layers of the image are just there to show print instructions, and should never be printed.

What's Chinese for "Layer" as in Photoshop layer?

Google translate thinks the translation of "Do not print this layer" is: 不打印這一層

But we all know it often misses shades of meaning.

Edited to specify: The instructions include cut lines. So as handy as the Photoshop "Notes" feature is, it's not the tool for the job here. The printer has specifically requested that the print instructions go in a separate layer.

What worries me about this, and e100 put his finger on it, is that your printer asks for the cut line(s) on a non-printing layer. Photoshop doesn't do non-printing layers, but Illustrator and InDesign, as well as Acrobat, definitely have that capability.

That tells me they probably aren't expecting a PSD -- at least not for this kind of work. With the printing being done so far away, that would make me more than a bit nervous. So you're right to be cautious, but I think this is the wrong question. Just because you say something is non-printing in the Photoshop file doesn't mean their prepress people will pay any attention, or even notice. The safe route is to make an actual non-printing layer.

The most straightforward way of doing this that I can think of is to turn off the cut lines layer, save and bring the PSD into Illustrator (just drag the file into an open Illustrator window). Slightly less direct, but much better if you have text or other vector art in your file, is to save a PDF from Photoshop and open that in Illustrator.

This new document will have one layer, the PSD/PDF, so create a new layer by clicking on the New Layer icon in the Layers panel. Name it "Cut Line" and turn off the "Print" checkbox: 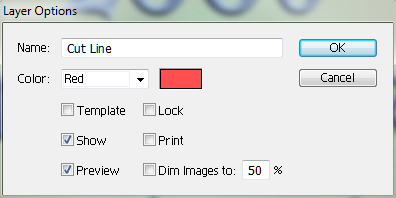 Draw your cut line on this layer, give it a 1 pt stroke, then lock it. Now you have a file with a real non-printing layer. You can Save As a legacy format if your printer specifies it, or as a PDF. In the PDF, the cut line layer won't be visible by default, but it WILL be there, and will be used by prepress.

To make assurance doubly sure, perhaps, you could edit the layer properties of your cut line layer in the PDF, also. This is what the dialog looks like in Acrobat: 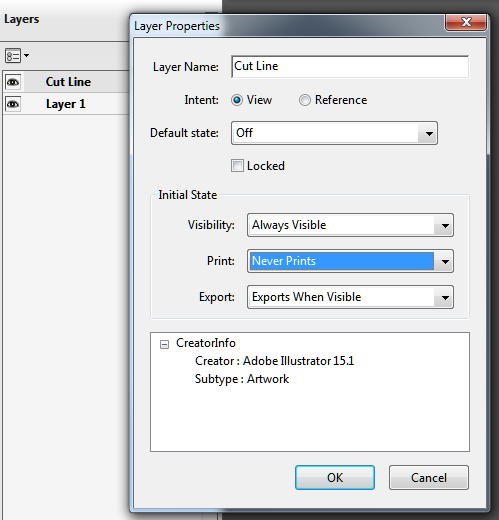 Note that the Visibility has been changed to "Always Visible" and the Print to "Never Prints." As a caveat, I must tell you that I have never, ever had to do this step, but I also have always been in very good communication with my print provider's prepress department.

Since Photoshop Cs3 there is a neat tool called Note tool. The problem is that it is hidden behind the eyedropper tool so nobody really knows about it. Use that for any instructions and dont create layers with text as instructions cause they might get printed...it happens.

As for the layers word in chinese... you don't really need it, under the note tool there is the numbers tool, you can "number" the elements you want to specify instructions for.

Play around! Have fun! Look at the screenshot bellow to see what I'm talking about. 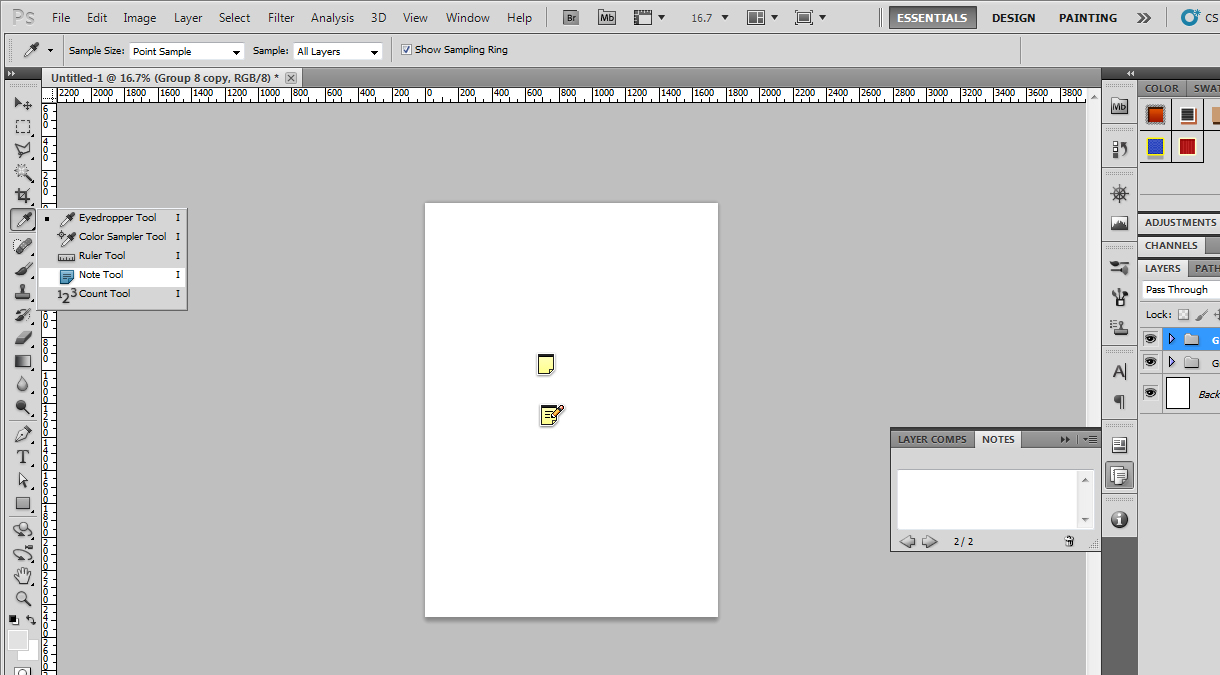 when i see this, the question has been closed, but i am actually a Chinese and currently live shanghai, so i just want to say

"layer" in Chinese should be

and the layer for photoshop in Chinese should be:

Actually the answer you get from Google translate is quite good enough for anyone in our country to understand!

I don't know, but I would definitely mitigate the issue by separating the print instructions out to a separate document, or separate page in a multipage PDF.

Then the printer doesn't have to worry about layers within the document.

To simplify and just answer your question[basic mode], I just asked a friend about this, he is chinese and working with photoshop, the word for Photoshop layer in chinese is :