I am using Illustrator CS2 and I am trying to create a sharp circle. Nothing I do works though. My circles are blurred, mostly noticeable on the top, bottom, left and right edges. Example: 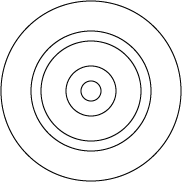 I understand that the picture showing above is a PNG, but it looks the same on my screen in Illustrator. Maybe some of my settings are not optimal? Any advice?

Here is an attempt to reproduce your picture with Inkscape, which uses a different rendering and PNG-conversion engine, as far as I know: 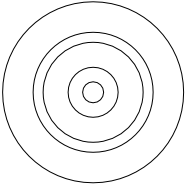 I would guess that you would consider this to exhibit the same problem as your example pictures. If I am correct, this indicates that your problem is probably not related to you using the wrong options but rather to inevitable shortcomings of pixel displays. 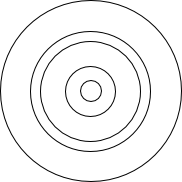 I assume that you consider this image better (though probably not perfect) with regard to your issue. However, if you take a look at the two innermost circles, you probably notice that they are not perfectly concentrical anymore (if you don’t, let me tell you that I notice and find it irritating).

If find the latter issue illustrative of the general trade-off one has to make when rendering graphics such as yours, namely between:

Apparently, Inkscape and Illustrator chose to make this trade-off too much in the direction of the second point for your taste. But for somebody else or another graphics, this choice may be the best one. After all, the rendering engine is only a stupid program and cannot read your thoughts. If you want to tilt the above trade-off, you have to do things manually to some extent or use a software that allows you to instruct it how you prefer things to be rendered (I will come back to this at the end).

Let me give another more drastic example. Here is a 301 pixel-wide rendering of a vector graphics of 56 equidistantly arranged lines.

As 300 is no multiple of 55, the rendering software has to choose between blurring some lines or destroying the equidistancy. The only way to avoid both is to stretch the image to 331 pixels:

Let me finish by saying that there is a type of software that allows you to instruct it how you prefer things to be rendered: fonts or font renderers, respectively. Fonts can store information (so-called hints) about how glyphs should be rendered (e.g., where stems of letters are), which allows font-rendering softwares to produce the good results they do nowadays. But this only works because we humans have clear preferences as to how we want text to be rendered (and there are far fewer issues that can arise with text than with vector graphics in general). For example a good standard m is rendered such that all its stems fall on pixels and the distance between the stems are equally wide – at the expense of making the letter significantly wider or narrower than it would be according to the underlying vector data.

Have you tried creating this with Illustrator set to align paths to pixels? (Assuming CS2 allows this, of course.)

Rather than rehash it here, this page does a great job of explaining how to do this: http://medialoot.com/blog/3-valuable-pixel-perfect-illustrator-techniques/ 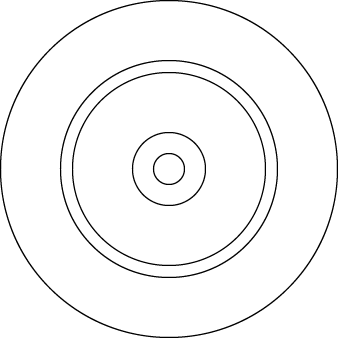 Under view make sure pixel preview is not checked. Also, i think you can alter how a image renders.

Not the answer you're looking for? Browse other questions tagged adobe-illustrator rasterization or ask your own question.

1
Creating vector image using .png in photoshop
6
Pros and cons to .AI vs. .EPS file formats in 2017?
1
Pixelated image on edges when superimposed
2
Illustrator Eyedropper Tool can't sample the Appearance of grouped objects?
2
Creating a rounded corner on a shape
2
Exporting isometric cube to png results in incorrect sides and rough edges of the cube