What are methods do you use for handling typography issues (Ill, ill, fi, ct, Th) without using ligatures?

So, this is a question I've never asked, and in most cases avoided pointing out all together. I'm finally open to finding a non-ligature solution too. Preferably one that doesn't require a font change.

Some ideas for fixing the Ill are..

I've checked several classic sans-serifs (Helvetica, the Neue Haas Grotesk update of it, Akzidenz Grotesk, and Univers), and they seem to have an convention that I (upper case i) is slightly fatter and taller than l (lower case L). That's good enough for me; in your case you might want to consider using a serif font if it's driving you crazy.

How to get rid of unwanted ligatures in InDesign

Webfonts often have very "bad" "stylish" ligatures and I don't notice the same with PostScripts or TrueType fonts in general. 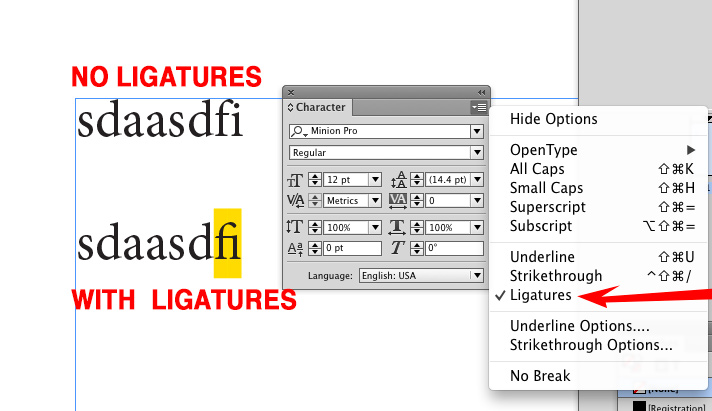 If you want to NOT have ligatures by default for every new document, simply close all your files in InDesign, then make sure the "Ligatures" option is not checked in the character panel options. This should become the new default setting for this.

To fix the ligature issue, I only use them when it's important for spelling and add them manually when I need to; it's a personal preference. It's faster to add them on the few words that really require ligatures than removing or fixing the ones that don't. I don't use them anymore by default, and there's always the kerning that can be adjusted for the extreme cases.

Good old postscript and quality fonts will make your life easier and they look good; it's a pain and really unsafe to use different fonts in the same word/sentence unless it's done in a title. Creating your own font is an option, yes, but a lot of work too.

(added to remove the confusion between the "decorative" use of ligature vs grammar/editing, and how/when they're really necessary)

Some history about ligatures

Ligatures: A Guide to their Proper and Improper Use

"The use of these little characters increased during the 15th century with the advent of metal movable type, a system of printing that uses metal blocks of letters to print documents. In this system, ligatures were both a time and space saver. They began to fall out of use in the 1950s due to the widespread use of sans-serif fonts—that is, letters with little overlap—and typewriters. Now, with modern printing and desktop publishing, ligatures are rarely used. When they are, it is simply out of stylistic preference."

"...They do, however, recommend using ligatures to maintain Old English spelling in an Old English context or in foreign languages where they are commonly used characters."

Latin alphabets that use special ligatures

List of words that may be spelled with a ligature

I don't see any "fi", "fl" in that list; they can be safely ignored if you don't like how they look like and put a priority on spelling above "style."

"The fl and fi ligatures, among others, are still commonly used to render modern text in fine typography. Page-layout programs such as QuarkXPress and Adobe InDesign can be configured to automatically replace the individual characters with the appropriate ligatures. However this is a typographic feature and not part of the spelling."

Even if some people consider some ligature are a "character" on their keyboard, the reality in modern time is that ligatures are ligatures. The aesc for example is not universally recognized as an extra alphabet character.

Designers can use them or not, but usually high level editors will absolutely prefer to see the "grammatical ligatures" respected in their texts. English might be more relaxed about this rule, but in general, english is very laid back when it comes to language and grammatical rules anyway. In french, for example, you need to use the aesc when a word requires it otherwise it's considered bad (or lower level) grammar. Of course, we're not talking about plain text here.

Not the answer you're looking for? Browse other questions tagged adobe-indesign text publishing or ask your own question.

15
Endnotes in InDesign: Closest thing to a pain-free, flexible workflow?
6
Can you merge multiple .indd files into one editable .indd without using book?
8
"Flip" italics/oblique with character style
2
What workflow should I use for enterprise-level business card creation?
1
What are the options for digital magazine publishing?
3
What colour system to use for print AND web publications?
3
What happens when you print without converting to CMYK?
5
What are some strategies for dealing with poorly written text?