How can I design this graph (select line colors and number of lines) so that it's intelligible?

I'm designing a graph for a website using Highcharts. This graph contains lots of outbreak curves (basically, cumulative disease incidence over time). The point of this particular graph is to be able to quickly and easily compare multiple curves to a public health official's current situation (the "point estimate").

Each curve has a score (between 0 and 100) that refers to how similar to the point estimate it is. I want to display the top X scoring curves and color them according to how good their score is.

I'm having a hard time deciding on two things: 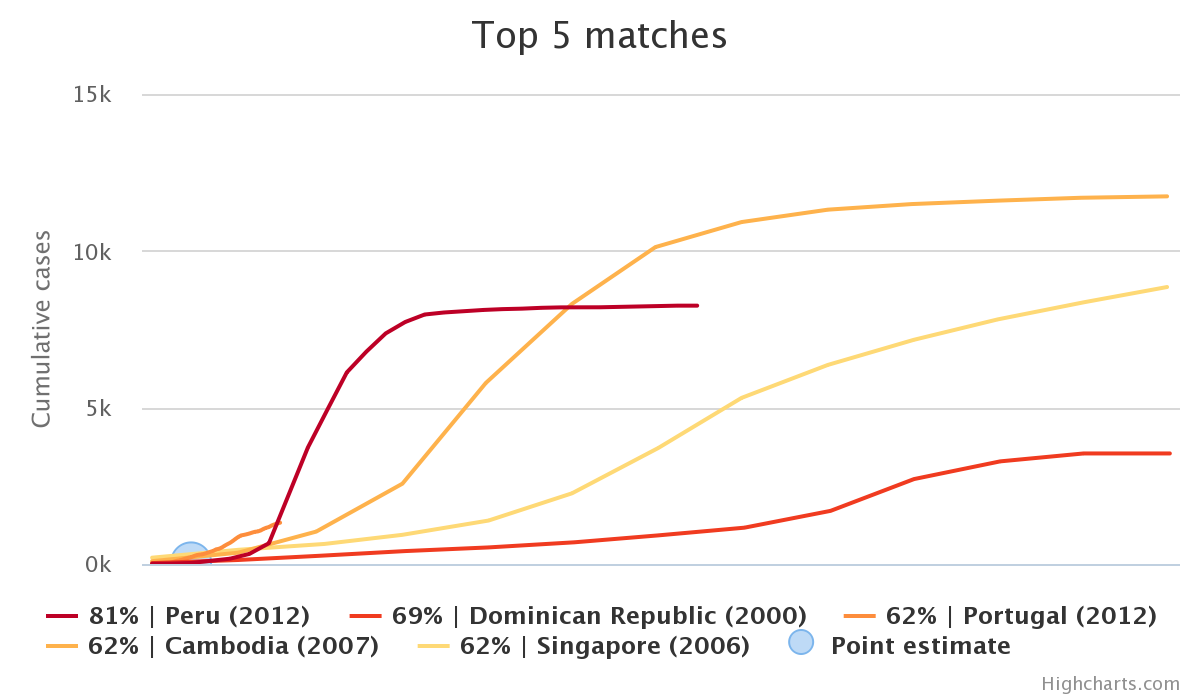 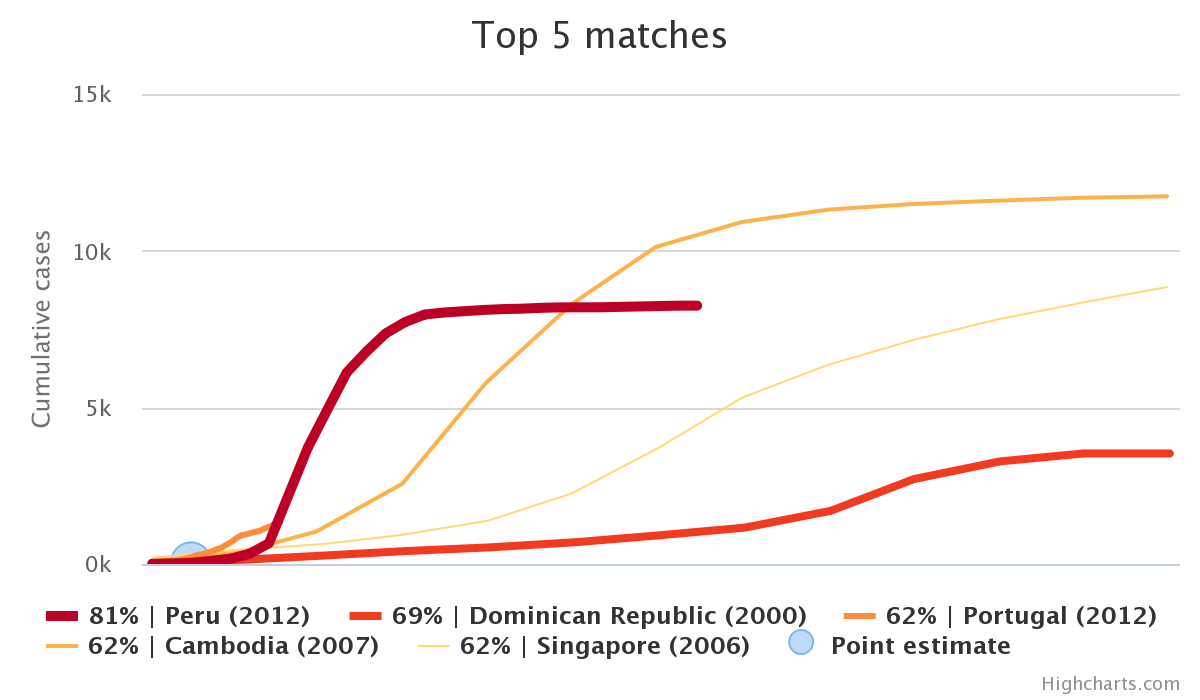 Neither of these options are particularly good, though, because they don't adjust the lines according to the score. Instead, the lines are colored categorically. If the score of the top scoring line is 100 and the next highest scoring line is 10, the colors are not 1/10th different if that makes sense. 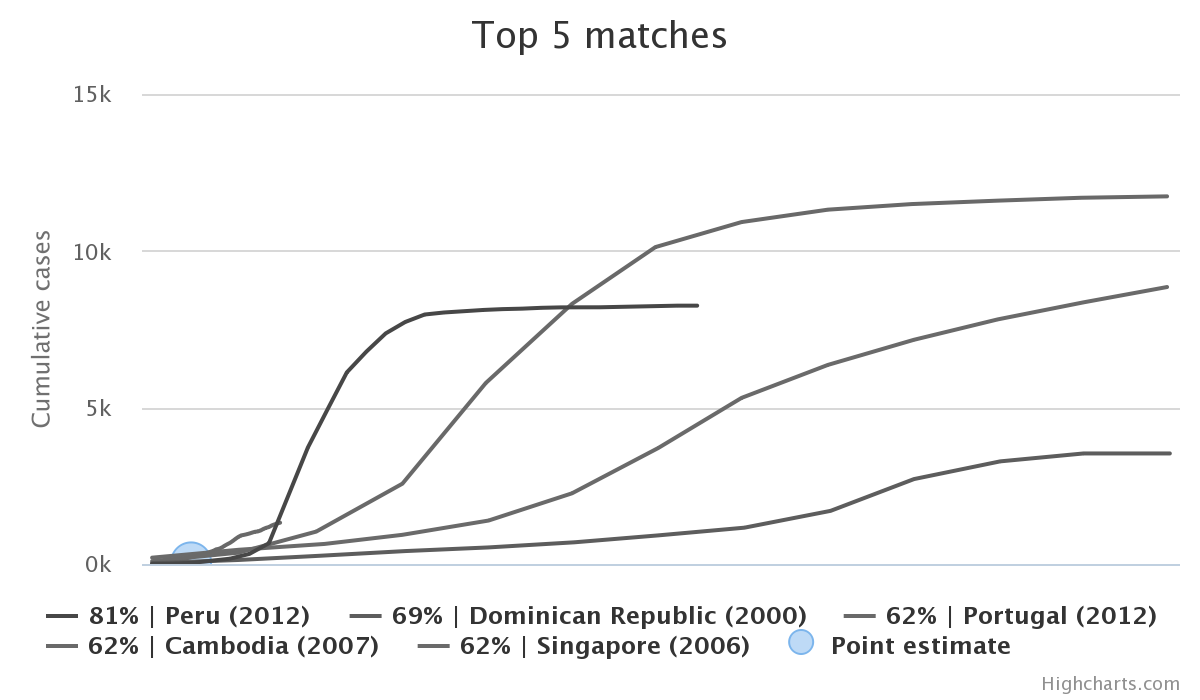 Here, despite the fact that there is a 19-point difference between the best scoring line and the worst scoring line, it's almost impossible to tell them apart. Changing the line thickness helps some: 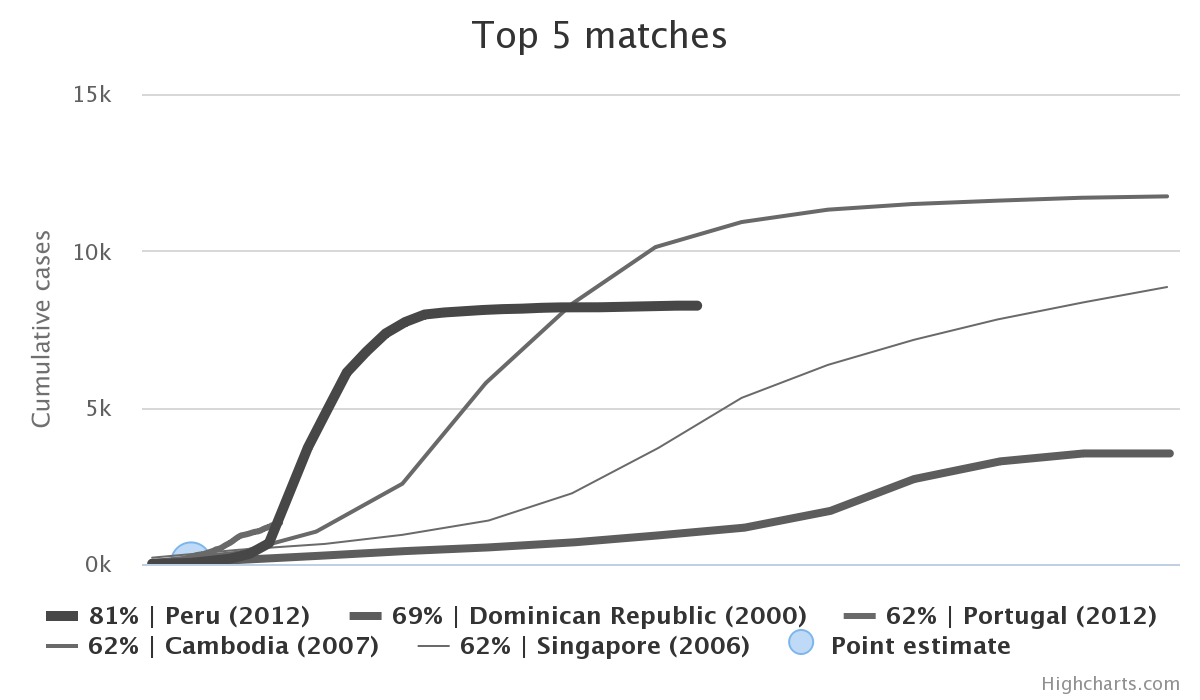 But then if I add too many curves, it just gets too messy. Here's an example (line thickness constant): 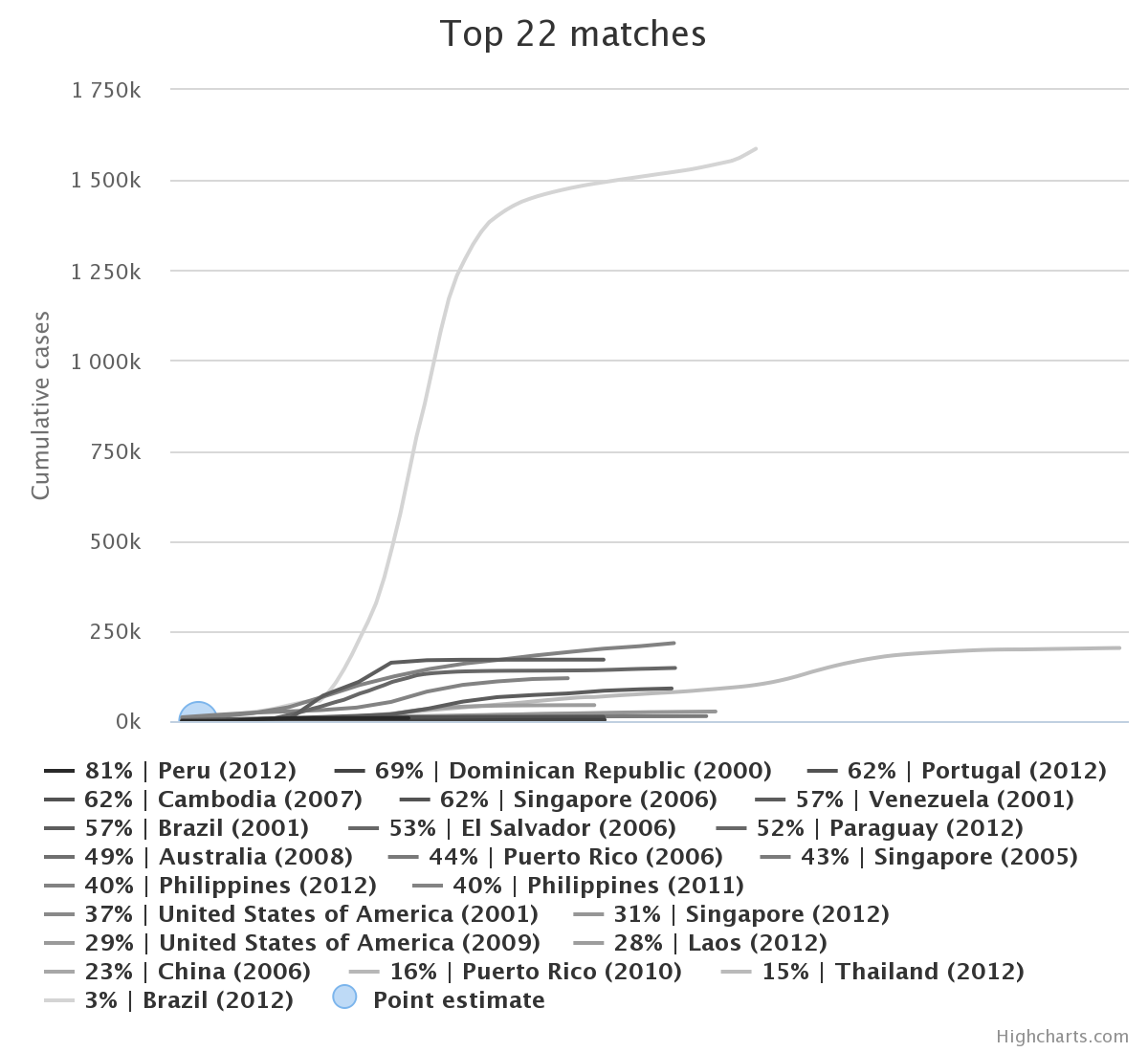 I obviously need some guidance. There must be science behind this problem. How should I design this graph?

As for technically realising this, any decent plotting program offers possibilities to customise colour axes as you like. As far as I can tell, Highcharts allows for this: You set stops on your colour axis with colours you define and everything else is interpolated linearly between those colours. This way you can use the full colour spectrum with an “exact mapping” as you call it.

As for choosing the colour, there are dozens of colour schemes available for exactly such purposes, e.g., take a look at this. I cannot tell you what is best for your application, but here are some thoughts:

How should I color the curves so that they're visually distinguishable and represent the scores?

This really depends on your data and what is important for the viewers. The central question you need to ask yourself is: Can all relevant information be easily seen?

Also consider focussing selecting the ranges of your abscissa and ordinate with respect to the important data and not with respect to all data. For example, if the outlying line in your last example is not really relevant or all the viewer needs to know is that it’s way off scale, then you should let your ordinate stop at 250 k.

@Wrzlprmft made an excellent comment that really helped. Although his solution didn't quite get me 100% of the way there, it did put me on the right path.

This web app is a Django app (Python). As a result, I've decided to use a library called spectra. Spectra has functionality identical to Highcharts' stops with linearGradient. Spectra allows me to do this:

This is exactly what I need.

Not the answer you're looking for? Browse other questions tagged color data-visualisation chart-design chart or ask your own question.

1
How to select 5 optimally visible and distinguishable colors?
2
How can I present this information with less required user interaction?
1
Color scheme for many options
4
How to create a line graph around a circle
4
I select a color in Photoshop and it's painting another one
3
Applying fills to an Illustrator line drawing
1
How do you avoid excel line graph lines being outlined on export
1
What type of chart is this and how can I create a similar chart?