Which software renders a planar projection of a 3D object as a vector graphic?

I would like to create two-dimensional projections of three-dimensional geometrical objects. The drawings should be in a vector format, SVG or PDF, which can be imported by Inkscape or Adobe Illustrator. On Wikipedia, I found the following examples (original SVG, CC-SA): 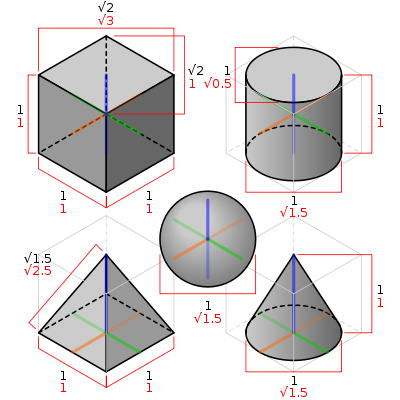 Those are isometric projections. A wireframe version thereof (black lines only) can be constructed with Inkscape's Axonometric Grid feature. However, this method does not help with shading. The sphere would look flat if the gradient was missing. Is there a program similar to Inkscape, which let's you choose the position of a light source and produces a planar projection with gradients?

An other shortcoming of 2D vector applications such as Illustrator or Inkscape is the difficulty to draw an object that is not aligned with the grid axis. Suppose, you'd like to rotate the cube in the figure by 20° without changing the perspective. How would you do this?

Note: With help from the answers found here, I found the following tools promising:

I'm thinking Google SketchUp might be perfect for that.

With the Pro version of Google SketchUp, you can export views of your models in PDF and EPS format, allowing you to continue to work on them in vector editing programs like Illustrator and Freehand. For 2D images that need to be resolution-independent, nothing beats exporting to these formats.

Sadly this feature is in the Pro version only which is not exactly cheap.

In many schools of architecture, the software of choice for creating annotated vector drawings of 3-dimensional geometry is a workflow from Rhinoceros 3D (Rhino) to Illustrator. Rhino is generally the tool of choice for 3D drawings, diagrams, and drafting because it can be easily scripted or extended with Python or Grasshopper (a visual programming plugin). Additionally, Rhino can import a wide variety of file formats, including Illustrator and PDF.

Rhino includes to options that are typically used for this:

Here's a sample of the type of drawing you can create with this workflow: I should note that while Rhino does not natively export to SVG, there have been attempts to build that functionality using Python scripting.

Swift3D is a vector-based 3d application that seems to offer gradient shading.

I have a suspicion that you can do it with GeoGebra. It's a free app for geometry constructions. They mostly focus on planimetry, but the current beta also has stereometry.

all the major renderers should support this. the google term you are look for is " vector line rendering"

update: seems my answer was too ambiguous. the "Illustrate!" plugin (3ds max) supports vector line output; this is for flash export

http://www.davidgould.com/ "One amazing feature of Illustrate! is its ability to render these styles out to vector artwork. It currently supports Shockwave Flash, Adobe Illustrator, and Autocad DXF output. This allows you render your 3D scenes for displaying on the Internet or for inclusion with other vector graphics."

I am a mechanical engineer working with SolidWorks. It is even possible to parameterize the dimensions you want. This means that all dimensions can be related through mathematical equations.

Even more these images seem made in this software.

Not the answer you're looking for? Browse other questions tagged vector software-recommendation 3d svg perspective or ask your own question.