Are they both called logos? If not what would the later be labeled as?

There are no set rules or regulations as to what is and is not a logo.

Some logos may use more symbolism or iconography than others and some may use more type-based designs than others. However, in the end just about anything can be called a logo if it's used as one.

Since the images you posted are more certification indicators, they may be called "badges" because they are used to indicate a specific presence of experience or tested ability. So while they may also be referred to as a "badge" or "plaque", they are still logos.

There is no hard definition to any of these concepts. But, generally speaking:

Your first example of government logos are often called 'seals'. Their origins come from wax stamps and are designed to be a 'signature of authenticity' that was often used by nobility and government. Many government 'logos' today--at least in many English-speaking western countries--have adopted that style even today. For example, here's the 'Great Seal of the United States': 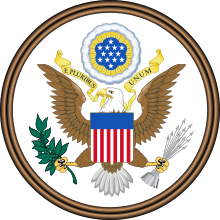 Alas, I tend to find them most of them ugly, a creation of design-by-committee, and generally uninspiring, but they do tend to still offer a sense of authority to government agencies.

Your second example is a bit harder to pin down. It could be considered a logo, but I would call that more of a 'stylized title'. It's a typographic design but not necessarily used as an official mark. In fact, if you google this, you'll find that Microsoft hasn't necessarily been consistent with this.

As for the Apple logo, that's what I think most would call "a really solid corporate logo". It's iconic both in terms of its simplicity of design, but also because it's attached to the one of the best known companies on the planet.

If what you're talking about is the presence or absence of graphics, or a single icon (like Apple or AT&T), the word you may be looking for is logotype or possibly wordmark. The Gap, adidas, Microsoft, and IBM all have actual logos which are just made out of type — altered, colored, dressed up, but type.

Having your branding made out of just type doesn't make it less of a logo, as Scott points out.

5
Wordmark or brandmark logos - Which are more effective?
125
Why do some logos look dated? How does design age?
1
How does apple use its logo? A question about gradient logos
43
What is the difference between wireframes and mockups?
0
How to make logos like attached examples?
0
Gimp: create single colour logos from full coloured ones
1
What kind of a design is this?
0
Are there Graphic Designers that only do logos?
2
What software do you recommend for creating a logo