How legible is a right-aligned same-line header compared to a more conventional left-aligned separate-line?

I maintain an internal weekly newsletter* sort of thing with zero or more points of interest* for each of a couple dozen people*. It's organized in groups within columns with a header for each such person-group, and my initial design when I took over and reworked it originally was to have the header right-aligned (displacing the text flow around it if necessary):

On the suggestion of my boss*, and although I wasn't really convinced it was necessary, I changed it a while back to a more conventional format with a slightly-indented left-aligned header on its own line:

I'm not really asking for bullet points to use to argue for one side or another. What I am asking is whether I'm even right in the first place to think that the first style is at least as legible as the second, while being more compact and maybe tying the name closer to the info for that name. (If there are other obvious glitches in the design as shown, I'd like to know about those too, but I suspect the whole thing would have to be shown to really catch much else.)

Since the whole thing has to fit on a single double-sided sheet of 8½"x11", compactness is a feature. But it's not the only one. And since everyone who reads this knows most if not all of the people mentioned, it doesn't need to be so much good at drawing in readers as acting as a readable quick-ref. (The lower margin in each group is for taking additional notes, and sees a good bit of use. It's not really going to be removed, although the height is occasionally tweaked to fit better.)

Full page with liberal lorem ipsum substitutions everywhere — all other formatting, and approximate bullet point distribution (including the occasional empty group), as original: 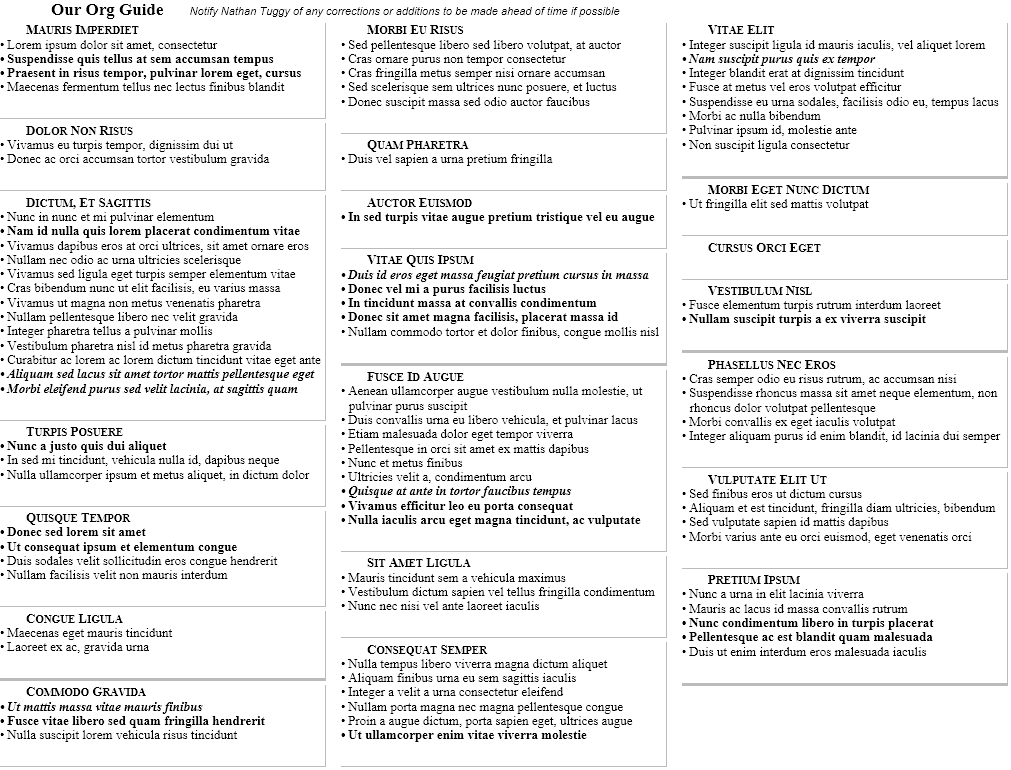 *None of this is quite accurate but it's close enough. In particular, this is volunteer work.

Seeing the larger picture, so to speak, I think your suggested right-flush design won't work.

The name would be buried over on the side, with the bullet points wrapping around it, rendering it either clutter or invisible. If your goal is to make this document a quick reference, then the reader is going to have to work to find the person's name, and the "quick" part is obviated. Saving that leeeeetle bit of space is only useful to you as the designer who is trying to save space — it doesn't provide value or utility to the reader who actually needs to use the document and doesn't care how it's constructed.

In this design, the name serves as the organizing element for the section. If you bury the lede, you've de-organized your organization. Sorry, but I think your boss is correct. (I also agree with Scott; the left indent is irritating and doesn't serve any purpose. Make the person's name flush left and a different font if you can, or all caps if you can't.)

Your suggestion would look nice if the bullet points part would be more compact horizontally, as it shows on your first image or if you had 2 columns. With 3 columns, it will end up taking more room vertically and the sentences with the bullet points will be very short on each line.

The other issue with having the names aligned on the right is that you need to make sure you have enough spacing between your columns too or it might be confusing to read; the names shouldn't be too close to the next column on the right. For this reason, the alignment on the right will always cause you some issues if you need to fit a lot of text in a small "box" and can't freely use the space you want horizontally. The only thing you can do to be able to make it easy to read with the names aligned to the right, is to use a condensed font for the bullet point part; additionally, you could also put the names on 2 lines.

I don't like the indent of your "boss" suggestion. I can see it saves some room but it lacks balance and I think you're right when saying it would be easier to find the names if they were on one side.

With the conditions you mentioned, why not align everything totally to the left and use a sans-serif font for the names to make them more visible and less "lost" within the text?

Maybe you'll find some satisfaction in this and your "boss" will also be happy; the emphasis on the names will also be clear. 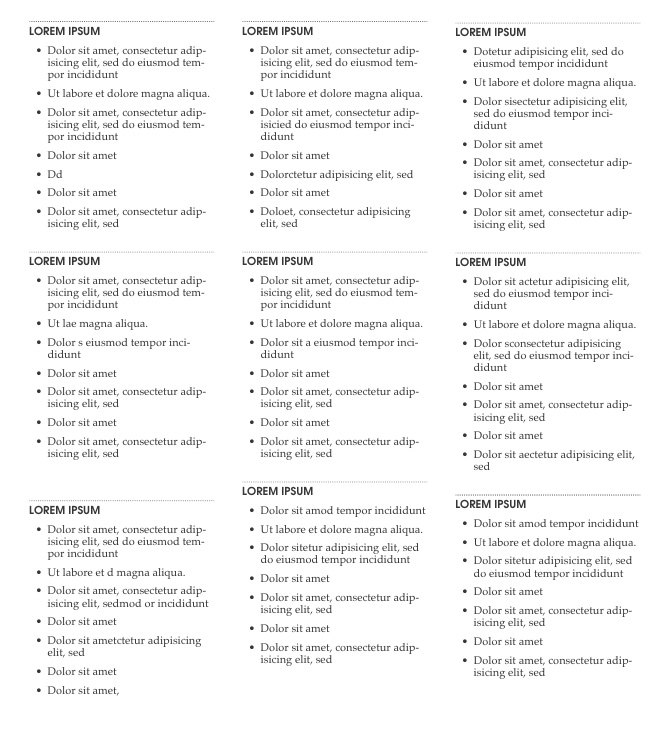 Right alignment can be legible, but is more of a challenge. In both examples you show, the name (or subhead) needs to stand out more for legibility.

You can try adding a paragraph rule to create a black box around the name. In my example below, the subhead is bolder and one point size larger than the original text. Im not sure how you got the bulleted list to wrap around the right aligned name, but I believe it would work also with this scenario. 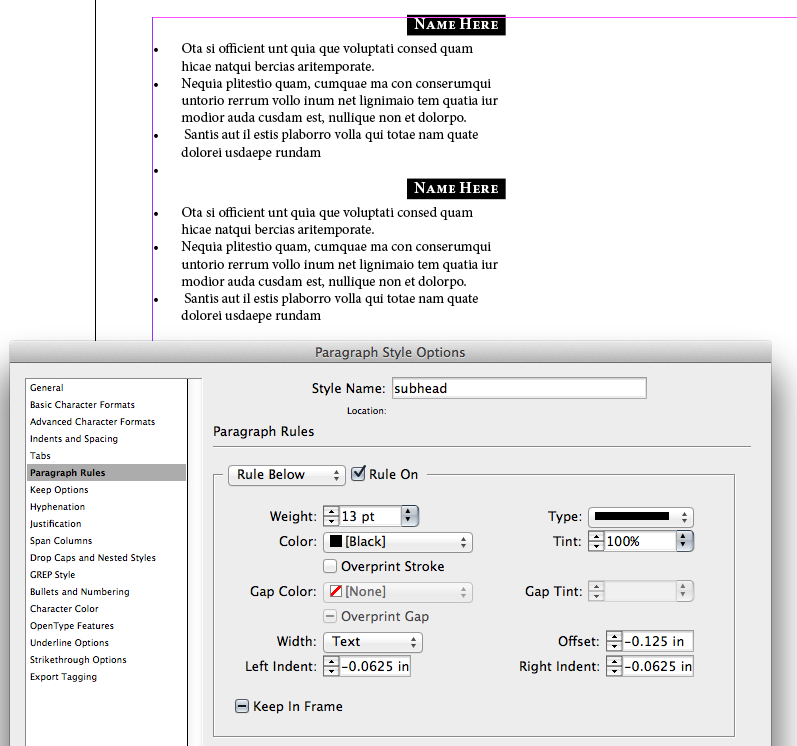 The challenge with the flush-right positioning for the names is that it visually pulls your eye away from the bulleted list associated with the name and closer to the bulleted list of tasks for the person listed just to the right in the next box.

However, if that doesn't help with space, @go-me's example is spot-on with what I would do, especially on the use of contrasting serif and sans serif fonts.

I'd be interested to see what you end up going with.

Not the answer you're looking for? Browse other questions tagged print-design page-layout alignment composition or ask your own question.

0
How to still keep the automatic InDesign page shuffling while starting a new section on the left or right side?
1
I have a inline image aligned to the right in a master with one column. How to keep the image to the right with 2 cols master_
2
How should I design a left-right UI where the left is smaller?
0
How can I justify paragraph text in Corel Draw and make the bottom line aligned right (not left)?
0
Illustrator: Way to align / justify text with left + right in the same text box?
4
How to create a document with alternating (left and right) master pages without working in spreads?
10
Is there a general rule regarding font spacing?
1
How do I make a hanging indent on right-aligned text in InDesign?
1
Illustrator: How to trim of the edges of a line such that the line is aligned with the boundaries of a rectangel