I am going through GIMP manual and stuck for my shame at the beginning. How do I call that autoCommander? Is it example for the final result? 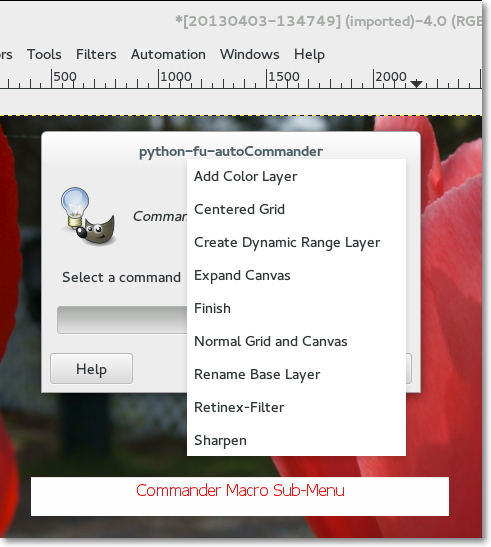 And assume I wrote that pseudo code into ~/.gimp-2.8/myXml/commander/NormalGridCanvas.def:

To convert this to an XML I am supposed to use the GenCommanderXml() from XmlGenerator() class from autoBase.py. According to the next picture it can be called from the GUI: 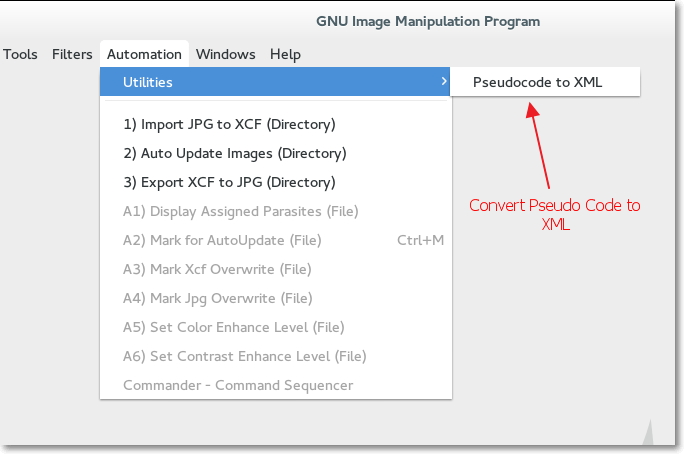 But I don't have a menu item called "Automation". I also tried to call GenCommanderXml in a GIMP's Python Console but that failed as well. What do I missing?

Sorry - this you are pointing too is not the oficial GIMP manual - it is on "tutorial" section - and the proposed tool there does not actually exist.

I don't know what it is doing in "tutorials" - it is a loose bunch of ideas on what would be possible to do using GIMP scripting - however, from the first third of that post and bellow it is just a lot of whishful thinking of the author - only the very first listing there is something concrete (Example - GIMP-Python Code Fragment) and still rather useless - it puts lots of extense calls just to set a single image grid options.

What is possible is to script GIMP in Python language - for which we lack good documentation or tutorials. The official docs are here: http://www.gimp.org/docs/python/ - but they lack examples of immediate use (in contrast with writing a full plug-in) . If you look my GIMP related answers here and on Stack Overflow you will see a lot of other examples.

Not the answer you're looking for? Browse other questions tagged gimp automation script or ask your own question.