How can I make the color white look as white as possible?

In designing websites and applications, I have noticed that when mixing colors with white, certain colors make white look more "greenish" or "purple-ish". This happens to a much greater degree when using tints of white.

I love this question. Although it sounded wierd at first.

This first part I learned it prior to the digital age, mixing actual paint.

If you make a gradient straight from your base color to white you can sometimes have an undesirebled hue. For example Red to white pass trhu a pink color. (Orange arrows)

You need to slightly turn the color to a lighter part of the color wheel. (Green arrows) to compensate. 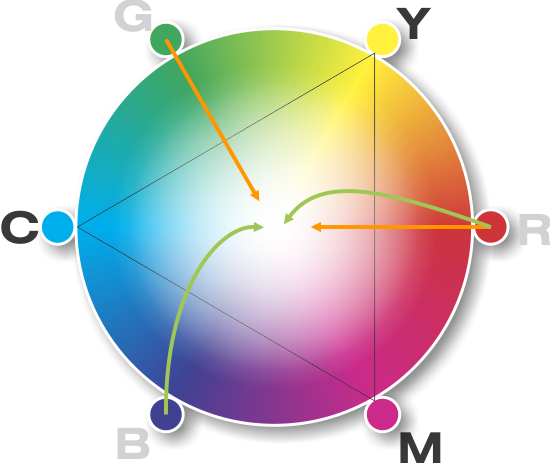 Here is the diference. I just added a little yellow on a patch in the midle of the gradient.

The same is true to the darker gradients. Specially with the yellow 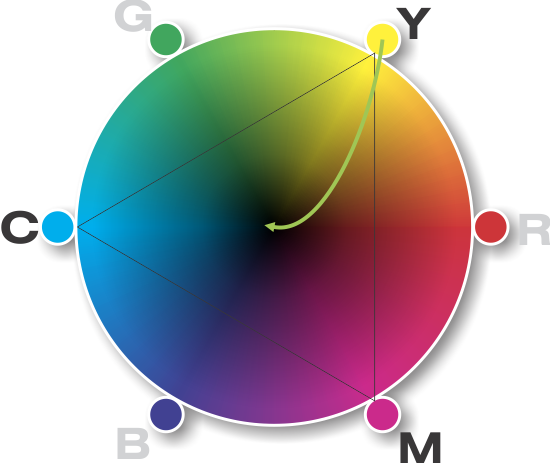 The ammount of "correction" depends on the project.

What you're explaining happens to all color actually but might be more obvious on whites.

The main color, especially if used in many different tones or shades will create that illusion that the rest of the layout also has a tint. Sometimes that chromatic illusion has some benefits, for example in home decoration and painting.

You cannot control the reflection of the dominant color on the other colors but you can at least control that chromatic illusion. I think that reflection might be even worse on mobiles.

The only way you could balance this out is by having more neutral colors as dominant ones or by using colors that "cancel" each others. Not an easy task but that's how a lot of designers cheat to get rid of that illusion.

If you still want to cancel that pinkish white created by a red layout app for example, you might need to use a white that has a bit of blue or yellow in it; at least you'll get to choose how you want the white to be. Because red is often considered as a very masculine color, you (or your clients) might not appreciate that pink white indeed but they'll probably find it better if it's a very light gray-blue or yellow, and in fact it will still look white.

You can use these whites only when they're surrounded by heavy area of the dominant color, and use a normal white on other areas where the surrounding is more neutral. The difference will be barely visible. 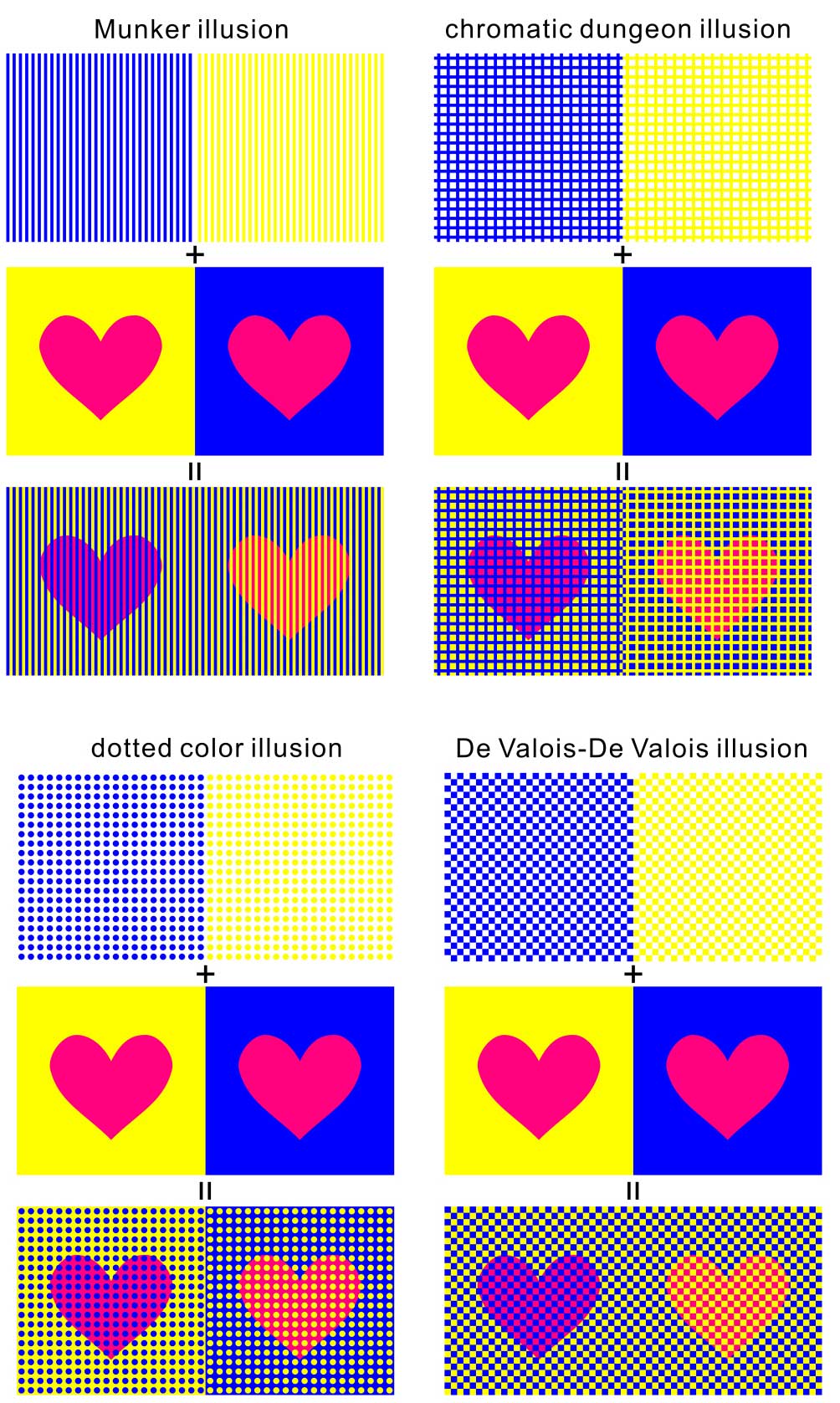 Source and other illusion to see: 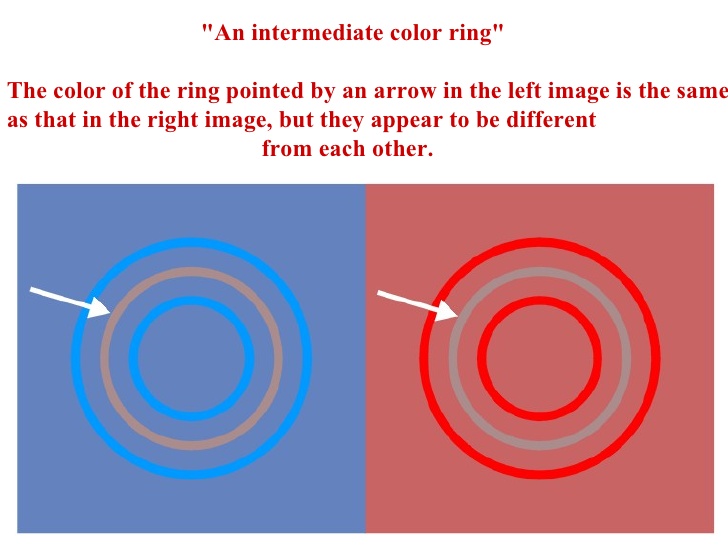 Source, worth having a look, lot of chromatic illusions:

Another one: Only 2 colors of chickens 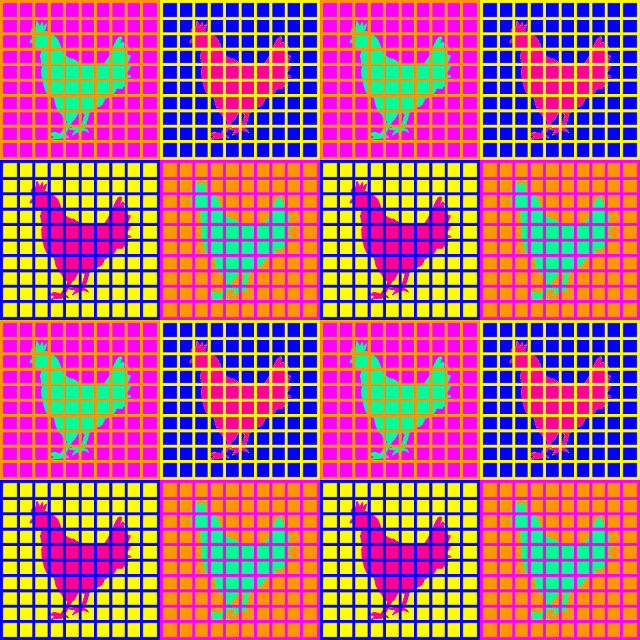 The effect will be more pronounced when the colors adjacent to each other are complementaries. That's why you see an even greater color shift when the white has a shade.

To compensate the effect you can try to add an analogous color to the white.

Here is some reference: http://www.webexhibits.org/colorart/contrast.html

go-junta provided beautiful examples. I will try to explain what it is and how to find out more about the overall effect.

This phenomenon of perception is referred to as the "Adjacency Effect." Search on the term for exploring the "Effect of the Surround."

PhotoShop takes advantage of this with the "Unsharp Masking" filter to "sharpen" edges. This doesn't actually sharpen edges so much as treat the edges so as to "appear" sharper with heightened local contrast.

Generic rule: To increase an effect, place it so as to create the maximum contrast. To make white "whiter," place it adjacent to darker shades and tones.

Not the answer you're looking for? Browse other questions tagged color color-theory white or ask your own question.

1
Picking the right "white" to suit a theme
5
Inkscape: realistic lighting and shading
3
Gradient "white mark" optical illusion
2
Selecting the exact color
2
Achieving advanced colorization effects
1
How to create harmonious color palette?
0
Calculation of RGB colors based on a sample color with darker and lighter variants
0
Opacity turning colour into a yellowish tint
1
How to choose the right color shades/tints for branding? - Part 2
1
How do you create color scales?
See more linked questions

13
What's a good source of color palettes to provide to a color-blind user?
8
If these colors all have the same lightness, then why does my brain tell me some are lighter than others?
20
How to make a color appear the same on different backgrounds?
9
Creating a color scheme that looks good on screen and when photocopied in black and white
6
How do I refer to a color in a text? What naming system do I use?
0
How can I fix printed colour problems with images designed in Photoshop?
4
why does desaturated yellow seem darker than saturated yellow if paper can't be brighter than white?
3
Determing the best X colors to provide the most coverage in a pallete?
0
Print deep blacks in CMYK photo magazine
1
Would a 5+ Colour Printer output any noticeable improvements on Prints of Artwork captured by Camera/Scanner?