How Many Directions / Concepts

This is mainly referring to branding / logo design. I typically offer (at least) 3 different ideas so that my clients have more of a choice of what they prefer. I will then revise their favourite until they're happy with it.

Each idea will be based on some kind of 'focal' keyword which will often be the main idea behind the concept... with other keywords to support it (which can determine, say, the colour palette or choice of typefaces).

But recently I've wondered if it would make more sense to just stick to one main keyword / idea... and base all 3 logo concepts on that. So for example, all 3 ideas may be based on the idea of 'connections'... but carried out different ways.

So it might make more sense to involve clients more in the design process, so that everyone can agree on what kind of 'idea' should be behind the logo before even any sketches have been drawn. I imagine this could be done purely through research, client meetings, mind-mapping etc (maybe some sketches if necessary)

I'm just thinking that will make everything go a lot smoother. Because sometimes I feel like I'm forcing myself to come up with different ideas when really I should just be focusing on the one.

How does everyone else go about it?

Here is an example of a previous branding job I worked on a while back to help illustrate my question...

The main idea behind the (chosen) logo was 'unexpected'. There were several supporting keywords such as 'elegant' and 'majestic'... these helped determine the look & feel of the logo. Whereas 'Unexpected' was the focal keyword that the logo was aiming to portray.

But the other logo ideas I worked on originally, used the same supporting keywords (elegant / majestic) but had different ideas behind them, e.g. one was influenced by the client's own work. Another was based around 'imagination'.

If you listen to the godfather of corporate logo design, Paul Rand (and really, you should) you show one idea:

You, as a trusted, experienced designer should also be able to digest the project needs and desires and come up with the appropriate solution.

Granted, we don't all have the cache that Paul Rand built up over his career and because the industry has created the defacto "standard" of 2-3 ideas must be presented, that's perfectly normal as well.

In either case, the key to success is that you know how to sell your solution to the client. That's often at least half the battle.

I think it's better to show 3 different concepts but that also depend on your contract and how much time you want to spend on this. With design, I like to say "everything is possible it's just more expensive." So it depends on the budget of the logo, how fast you create and in how much time it needs to be done.

If you work as an in-house designer for a company then you can take 6-12 months building the brand and showing it drop by drop as your second suggestion. And enjoy the hours of listening to everyone's input in the meetings. You will go through this anyway, no matter how genius your logo design will be.

But if you have a contract and flat price for a logo then you will definitely save time and energy by already targeting which way to go first and offering more options. You have no choice to be efficient on how you use your time; the more time you'll spend, the less your final hourly rate will be. A lot of time if the client asks for a first set of drafts, he/she might come back with ideas you could have simply shown them in the first set of proofs. That means you wasted your time working on a first set of drafts showing one idea in different colors/position, and maybe little will be recycled from this.

You're saving time and efforts when you can limit the number of proofs and revisions, and the big benefit is also that you limit the options if your 3 drafts are smart ones. And at least you'll get constructive feedback that will also give you better clues than "I don't like it, can you do something else." That's like starting from scratch every time. If you offer different concept, you can at least get feedback such as "I'm leaning towards this one for XYZ reasons but I like ABC from that one." That gives you something to build the next proofs on.

With one concept only, if they really don't like it, they'll even have hard time telling you the colors are right, even if they like them because it will be hard for them to visualize them in a different context. So having more than one concept helps for this as well.

There's one thing I've also learn with some clients; there's people who need to be charmed a little bit (at least) the first time and you need to get them excited about their logos/layouts or they will be more and more critical of your work on the next proofs as if they need to teach you what to do! There's some business psychology you need to apply when you do design; when you show 3 nice concepts even though there is 1-2 you like a bit less, you will still force the client to give feedback and to make a choice, or at least to lower down the options. Your client will feel like there is actually a choice given and that it's not about what you want but what he/she wants, that you've put efforts into the project. All designers have their favorite concepts but we don't always have the final word on this no matter how right we think we are; of course the process is very different if you're selling logos that are worth a few thousands for a huge corporation. But you know, logos need to have their "sidekicks" logos too in a way...!

The goal when creating logos is to decrease gradually the number of possible options and go by elimination, until the final draft is fully approved. It's faster to get there with many concepts rather than one.

for example, a recent logo design I worked on was based around the keyword of 'unexpected', so the problem was to portray this visually... but the other logo ideas I sent over were based on different keywords. But after I'd completed the project, I realised the keyword 'unexpected' made far more sense to work to than the others, and so it probably would have been better to base every logo idea on this same keyword, but carried out in different ways / styles

Keywords or concepts are very similar. But the concept can use many keywords, with more emphasis on some of them. It's easy to say the "I should have..."; how can you be certain your certitude doesn't come from the work you did and the feedback your got around your 3 keywords?

It's not a bad idea to use a few keywords to add more meaning to logos and avoid the "but we're not just X, we're also Y."

Even if you say you work with one keyword, you're probably still working with many in reality and you use them through the style. It's good to identify a few keywords that work well together and balance each others. Then you play around with them by alternating their importance. You're still using your "main" keyword, but in different measure; this way you also avoid doing a "one track mind" kind of concept and the client has more options. 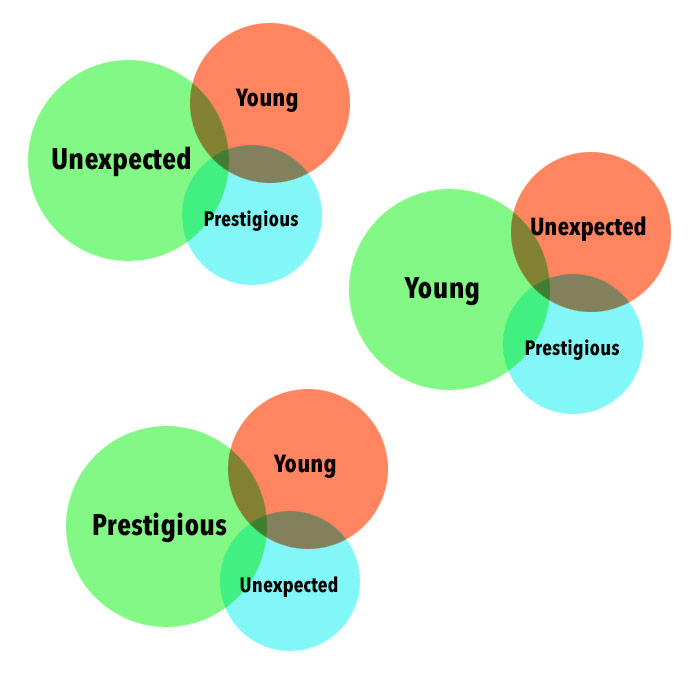 In any case, the best is to try and see what works best for you! After a while you'll notice a pattern and you'll base your decision on that.

The pattern I've personally noticed after many years in graphic design is: I prepare 3 different styles (e.g. classic, clean, organic, etc.), and then I use at least 3 main concepts based around a few keywords. Then I eliminate and adjust according to feedback. That system works for me, I usually get my logos approved within 2 to 5 proofs, rarely more. My clients appreciate the choice and I have a reputation of reading their mind. So either I'm really extraordinary or simply using a very efficient formula; I really think the formula is everything because I hate doing logos in fact!

If I tell you my experience client is like a customer who wants to see each and every thing you have but its not possible for a shopkeeper to open-up all the thing he has, same principle applied to are industry

In my experience, if you build up the brand correctly, you won't have to churn through so many variations.

You can be inspired by a single word, but it can't encapsulate the entire brand. Brands and people aren't that simple. Telling a story through a visual system is a complicated affair. That's why so many designers present multiple options: They want the client to help them decide. It's to be expected, but it's a cop out.

If you invest the time to define the concept in detail up front, the design will come naturally.

3
Is making the client "happy" the only goal?

6
How can you turn a clients ideas for how they want their brand to be into graphical elements?
40
How do you break out of current creative mind sets?
12
How can I represent "fast" or "Fastest" in a logo? Any successful examples?
4
Critique Request: CAD drafting contractor logo
0
Using part of logo in creative concepts
13
Designers response in an adverse situation during the presentation of a project
4
How to extract a client's logo expectations