What software is best for GUI design?

I've used Photoshop extensively, but the fact of the matter is that it's a photo editing tool. It has some complicated effects built in, such as the drop shadow and inner and outer glows etc., but it just isn't enough when designing a graphical interface. You can't add multiple editable gradients, for example. And you have to trick the tools into pulling off the effect you want, when they weren't designed for that.

I've also started using Fireworks, and there's a few things I like, such as being able to keep changing the curves on a rounded rectangle, but the color picker in that program just isn't usable. When you go into the mac color picker, it says the color is something different to what it is, due to Fireworks not handling color profiles correctly. This makes adjusting colors a very difficult process. And the software as a whole feels like a pre-release version (and maybe it should be).

So, I'm wondering what software everyone would recommend for creating a GUI? There must be some software out there which allows you to have a range of editable effects which you can change, change the order of, move around at any time, along with all the other tools required to create great graphics.

There is no universal "best" software for GUI design. It just depends on your software/workflow preferences.

I'm not sure what you mean by "multiple editable gradients", but if you know what you're doing, Photoshop provides all the tools you need to design any GUI you can imagine. No "tricking" of tools needed.

Despite its name, Photoshop has evolved far beyond being a simple photo-editing/manipulation tool, and there's no reason why you can't do GUI design in it. Photoshop probably provides the most comprehensive set of raster image editing tools of any graphics program on the market, and it's used for everything from digital painting to comic book coloring to illustration to web and UI design to video production and creating 3D game art to even photo forensics.

Features like adjustment masks, layer styles, vector paths, smart objects, layer comps, etc. make it a natural choice for UI design for those already familiar with its interface and deep featureset. Another plus is that it's well integrated with tools like Illustrator, Flash Catalyst, and many 3rd party apps/plugins.

Many people prefer Fireworks for web design as that's what it was specifically designed for, and for this reason it's also a good tool for GUI design. Being object-oriented and supporting pages, symbols, and styles, Fireworks lends itself very well to a UX design workflow. A lot of people also find Fireworks gives them better pixel-perfect control without resorting to rulers, guides or measuring tools.

Additionally, Fireworks has a lot of nice features like gradient dithering, ASE swatches, and in some ways better typography control than Photoshop. Fireworks' web layer and its integration with Adobe's Device Central also makes it easy to rapid prototype for multiple devices.

Another popular app amongst UX designers is Illustrator, which shares a lot of strengths with Fireworks. Like Fireworks, it supports symbols, advanced object styles, multiple artboards (similar to pages) and even better vector editing facilities.

Photoshop, Fireworks, Illustrator, as well as InDesign, all have wireframe/stencil kits and UX templates available for them on the web, but modular UX design is easier in Illustrator and Fireworks because of their support for reusable symbol libraries.

Illustrator also supports character and paragraph styles, making its typography design features far superior to either Photoshop or Fireworks. Additionally, Illustrator is great for illustration, so any icons or web graphics you might want to create can be made in the same program.

InDesign is another very popular app amongst IAs, IxDs, etc. Its graphic design facilities may be limited, but its support for pages, paragraph and character styles, snippets and object libraries make it ideal for a lot of UX design tasks. InDesign also has very advanced typesetting facilities and supports grid layouts. This, along with InCopy integration and Adobe Digital Publishing Suite make it a natural choice for print media companies looking to design mobile apps for their magazines.

That's why most UI design workflows include more than one app. So unless you're only concerned with a single part of the UI design process, e.g. wireframing or building the UX library or prototyping, then there isn't going to be a single "best software".

Pencil is a small and easy to use GUI design tool. 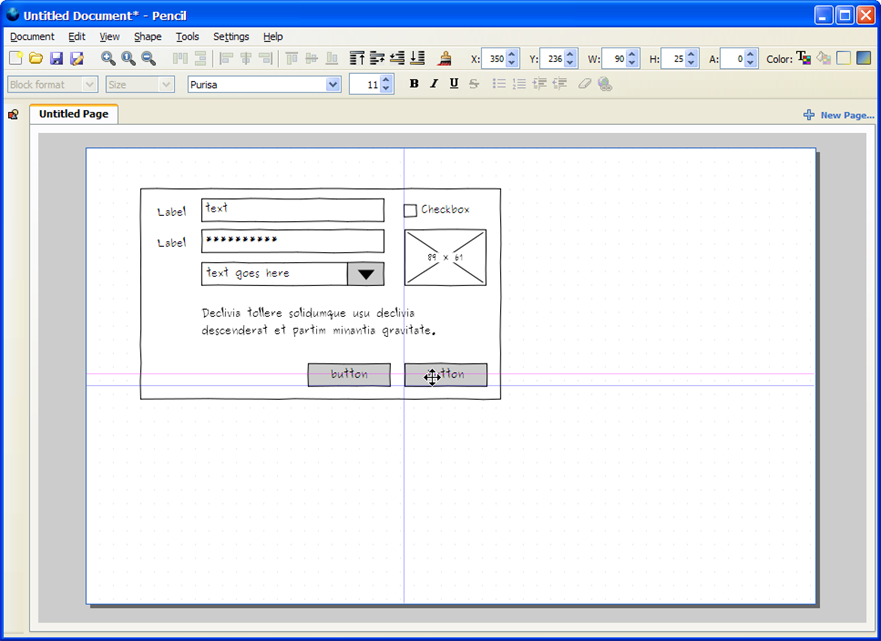 Where I work we use Indesign. We tend to create clean grid-based layouts with careful typographic styles, and for those Indesign is great. It has fine control on character, paragraph and object styles, which translates well to CSS and allows for fine tuning these elements at any point in the process, as well as permitting a more coherent layout. It isn't so great when exporting graphic elements, but we find the trade off worth it.

One of the most unexpected GUI prototyping tools is actually Keynote. I know quite a few top-notch UI designers who swear by it, and Keynotopia is a fantastic resource for using Keynote this way. If I hadn't seen it being used so effectively, I probably wouldn't have believed it, but it does work pretty well. If you're on a Mac, try it out!

With our prototyping tools you can develop prototypes for Website, mobile App or Software. You can simulate the mockup directly on a desktop, a smartphone or a tablet by using the free Pidoco App from the AppStore and from Google Play.

Not the answer you're looking for? Browse other questions tagged adobe-photoshop adobe-fireworks or ask your own question.

0
Software used to create Icons, Buttons for Mobile Application
5
Design software that allows reuse of common elements, like the DRY principal of programming
1
Is Illustrator good for Android?
0
What are the tool kits used for making designs like those on dribble

5
Photoshop “Save For Web” Color Shift problem
3
Why does Chrome distort my transparent PNG (adding a subtle inset “weak” area)?
9
What is the best Adobe software for designing a résumé?
2
Should I, or should I not, consider using an image editing tool other than PhotoShop?
0
PS CC 2015 - change color of library object
19
Techniques for cutting out hair accurately
2
How to edit text that is in a jpg photo (using newer technology)?
0
Color show in Photoshop picker is not the same I manually introduced
0
How to change objects at the same time in fireworks?
0
What is the best way to add gradient to many complex shapes?