I found a scientific article called A Thickness Illusion: Horizontal Is Perceived as Thicker than Vertical by de Waard, Van der Burg, and Olivers. It was january 2019 in the journal Vision.

Its conclusion is based on statistical analysis with 28 participants who were presented to horizontal and vertical lines of different thickness and was instructed to tell if the lines looked similar in thickness or not.

I won't attempt to explain the study in any detail, but I dug out that sentence you are looking for:

[...] the vertical line must be 5.4% thicker than the horizontal line for them to be perceived as equally thick.

27 out of 28 participants perceived horizontal lines as thicker than verticals, lending evidence to previous observations by type designers. The sample only included participants with normal, corrected vision from both sexes and ranging from 17 to 57 years old. However, other factors may come into play that could influence these results.

As mentioned in the article:

Interestingly, the effect size in the present study (5% in Experiment 1 and 3% in Experiment 2) is much smaller than the thickness difference between vertical and horizontal lines in some of the best-known geometric typefaces, such as Futura (13%) and Avenir (20%).

Typefaces compensates for the thickness illusion, but doesn't necessarily follow statistics. Aesthetics and culture also plays a big role. Don't forget that most western typefaces are influenced by writing with a broadpen where horizontal lines naturally become thinner than vertical lines. 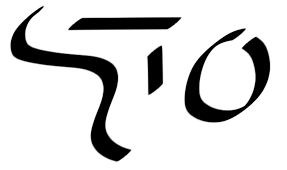 I can recommend these related articles from Hoefler&Co.:

The optical adjustment is there to compensate for an illusion that is caused by human perception. Mostly this illusion happens in the visual processing pathway somewhere between your eye and your brain.

Now its perfectly understandable that you get the answer use your eyes because thats the only simple answer. Your brain sees the illusion so you should be able to adjust for it.

But what about a more mathematical approach, is it possible? Yes, however, human visual system is very complex. So to generate a formula you need to device a way to measure what you, or a generic sample as proxy to human kind sees. Since tools for directly measuring a effect are really hard to come by, if they even exist yet. It means you end up doing a lot of statistical analysis on some indirect data.

Since not many are super interested in spending a Ph.D. worth of work on measuring this for one special case. They use eyes instead. Also dont worry about it so much, its just a font.

Not the answer you're looking for? Browse other questions tagged typography typefaces font-design type-theory or ask your own question.

8
Guidelines for logos using multiple typefaces
9
Footnote typographic conventions
5
Are there typographic methods of rendering a document traceable?
0
Optical sizes on posters
11
Is there any typographic mark for chapter?
7
Type Design: Background and guidelines for designing the Umlaute (ä Ä, ü Ü, ö Ö) of a serif typeface
5
Do digital fonts have true optical sizes?
5
Design guidelines proportional pitched fonts
10
Which two letters to use to show the most typographic concepts?
1
Are there typefaces designed to fit inside one another?