icon indicating "Nothing happened" or "No Data"

I have a website showing a matrix of Scheduled Operations 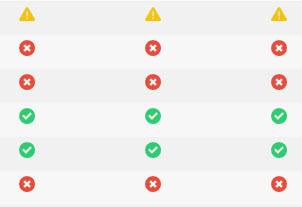 I need an icon that represents "No Schedule".

My first thought was

,but I really don't feel like this is the right icon for "No schedule" or "nothing happened".

What would be the "right" pictogram for this in your opinion?

Ask yourself: what is the consequence for the user? Does it matter to them? Do they need to refresh/retry/debug/uninstall/pick differently/etc.?

If it is a plain error, need to make an error icon. If action is required you need to make an icon for the action required. Context is more important than technical information.

After Edit: go with an inactive version of your icons:

To imply nothing happened / no data, I would use "nothing" - IE an empty circle:

Although it is believed that green symbols refer to success, it generally (IMHO ought to be) is not. They inform users about something is ongoing, which may be unnecessary or not usually necessary to be done.

Headlight and apply-brake (in automatic transmisson) symbols in car dashboards are examples for this.

You better inform user about something like, "120 tasks are added.". More than saying it succeed, this may give idea about the significance of that particular update.

No data presumably means the scheduled operation has run, so that limits the icons which are relevant.

If it's not OK that nothing happened — that is, it's failed — then the yellow exclamation mark is the icon to use.

If it is OK that nothing happened, then the green tick is the icon to use.

If the scheduled operation did not run, but did not miss its schedule (that is, the scheduled time was reached but it was prevented from running because there was nothing to do and no point in running), then you could use a green circle + tick because the job completed normally with nothing wrong, or a green circle with a different symbol (like a white ring) because nothing is wrong and nothing needed doing.

What the base colour is will depend on the purpose of the chart. If it's important to see a sea of green, then that's what should signify "No error".

I would use a simple circle (stroke only, not filled). Also perhaps change the ellipsis in "Waiting to Start" (…) to an hourglass or the hands of a watch to indicate time.

Not the answer you're looking for? Browse other questions tagged website-design icon user-experience or ask your own question.

3
Free pixel icon sets on the web?
0
Icon to best convey "Make a new post"?
1
What is a good generalized "navigate to" or "open" or "more" or "choose" or "select" icon?
2
Is there a conventional, widely used icon for decision support?
0
Icon for reordering a horizontal nav on an iOS app?
0
Iconography - Icon or text first?
0
Standard icon for SMS
0
Save and Close Icon