Embarrassed to ask this question, I am not an expert at any software packages, just taught myself InDesign to do my CV and portfolio for a job vacancy. Anyway I have completed adding photos to my portfolio. Now I am trying to understand the Pixels Per Inch (PPI) of the images so when I email it across as a PDF the recipient can see it clearly. The PPI of my photos all vary as I have increased and decreased their sizes. What do I do?

The effective PPI of each image in an InDesign document is located in the Link Info section of the Links Panel.

The panel will show both the actual PPI and the effective PPI once the image is scaled.

In this example the original image was 300 PPI and was scaled to 75%, thereby increasing the effective PPI to 400. 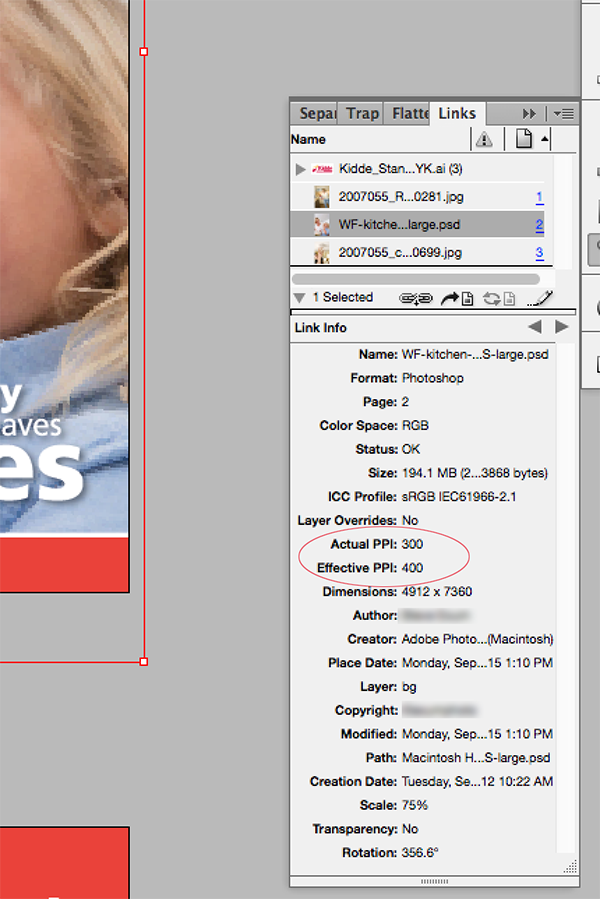 The easiest way to handle this is to create your PDF and then look at it. If any of the images look too pixelated, then those are the ones you either need to get higher resolution versions of, or need to scale them down on the page.

For photos "300dpi" is the safe bet effective resolution to aim for. But for some images, 200dpi may be just fine. Or even 150dpi. Or even 72dpi (if we're talking about a screen shot).

Effective resolution simply refers to the number of source image pixels that will fall into one inch at the image's current size. When you place a raster image (like a tiff or jpg) into InDesign, it places the image at its native resolution by default. That is to say, if the image opens in Photoshop at 3 x 5 inches at 300ppi, it will place at that same scale in InDesign. If such an image is placed into InDesign, both actual and effective ppi are exactly 300. However, if you scale the image up to 6 x 10 inches, the actual resolution will remain 300 (since you haven't edited the image), but the effective resolution will be 150 since you have spread the original number of pixels across twice the original area. The larger you scale an image, the lower the effective ppi, and vice versa.

8
InDesign: How to restore text-frame position/size to be managed by the master page instead of the actual page?
3
Scaling images down in InDesign and ppi
0
Placing illustrator logos in Indesign retains artboard dimensions (dead space around actual logo)
1
Adobe Indesign effective PPi
3
Indesign - Resize Image to Specific PPI
0
Creating a banner with InDesign at scale or actual size
1
InDesign: how to place table of contents in an actual table?
0
dpi vs effective dpi
1
InDesign: Placing 300 ppi image at 300% for intended 100 ppi output?