I have been given the task of getting an artists vinyl cover etc ready for print. I have been supplied images by the photographer but they are at the following values: 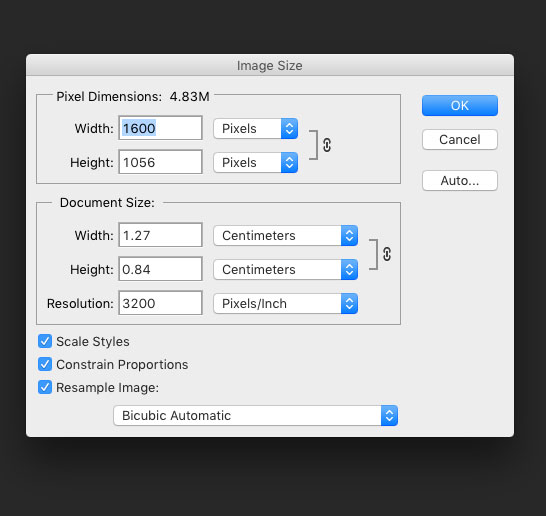 Any help much appreciated!

The Pixels per Inch shown in that window is only important when you import it into a print document (like an ID doc). When you do, it'll currently only be 12.7mm x 8.4mm. If you change the 3200 to 300, the size of the image will not change but its size when imported will.

When you're using photos, make sure the actual pixel dimensions are 300px per inch of print.

Your image in this case looks too small. A decent image is at least six times bigger than that. Check if id not provide just a sample by mistake.

A good design output for print should include 2 parts.

a) A Raster (or bitmap) image: a photo, ilustration, painting, 3D render, etc. For this cases where is a single artboard I recomend that you have just 1 raster image. But depending on the layout, yes, you can have several, but not transparent ones.

So, there is a chance that image is a sample and you probably can replace it later.

Use an apropiate program

1) Try not use PhotoShop only but aditionla programs.

3) Set your document size. If it is too large use a scaled one (For example 1m instead of a 10m) Not necesary for the case for a vynil cover, but that is the idea.

4) Put your photo inside. If it is a small one or an excelent one that is the photo you have. Yes you can ask for a bigger one if needed.

5) Make your texts etc in vectors. All thoose programs I mentioned do that.

Some math on that image

It does not matter what 3200ppi has now. It is just informative.

The real deal is what size is that image supose to be.

If you want it covering all the background for a CD (lets say) 5x5 inches you need a 1500x1500 image... So you have a problem. For bigger designs the image is usless. (Unless can be "artisticly" modified)

If the image is just a small part, becouse you are making a collage, you probably can go with thoose.

Again, if you do the design in a correct program you can simply replace the image after.

Not the answer you're looking for? Browse other questions tagged adobe-photoshop print-design cs6 resolution or ask your own question.

3
Re: View Size vs. Print Size and Resolution in Adobe Photoshop

2
Which Photoshop features are affected by different DPI or PPI tags?
7
Billboard Designing: Why design at higher resolution instead of the actual, lower print resolution?
3
Inkscape, 300dpi image for printing, 2"x2" - export settings
1
Help! Layout Size 1/2" = 1'
1
How do I resize my album cover image for a print template?
0
dpi vs effective dpi
2
How does Illustrator calculate the "Fit to page" print option?
3
Printing a Vinyl Sticker "Skin" for a large City-Owned Bin (Skins for Binz)