I noticed that if I drag an Illustrator document icon from its folder onto an art board in Illustrator it places the document as a "picture" of some sorts. Would the color be accurate in this case? I am trying to create a proof sheet of several product labels and would rather not have to open, copy and paste every label into the proof document.

In short, there's no inherent reason you should have a problem dragging/dropping one AI file into another AI file. However, the nature of the artwork may play some role if you then want to edit the dropped art.

When you drag an Illustrator file (from the Mac Finder or Windows Explorer) and drop it into a new, open, Illustrator file it is the exact same as if you chose File > Place and select the file you dragged.

In other words, dragging/dropping to an open file is the same as placing the file.

What is "placed" depends upon the file you are placing. If it's an Illustrator file with PDF compatibility on, then the PDF portion of the file is placed inside the new document (as a link). This often means the overall artwork may be flattened more than the original (live) file. However, that is not necessarily a problem. If you "drop" an AI file without PDF compatibility on, you probably won't see the artwork but rather an explanation about PDF compatibility being off or some random designation that something is there. 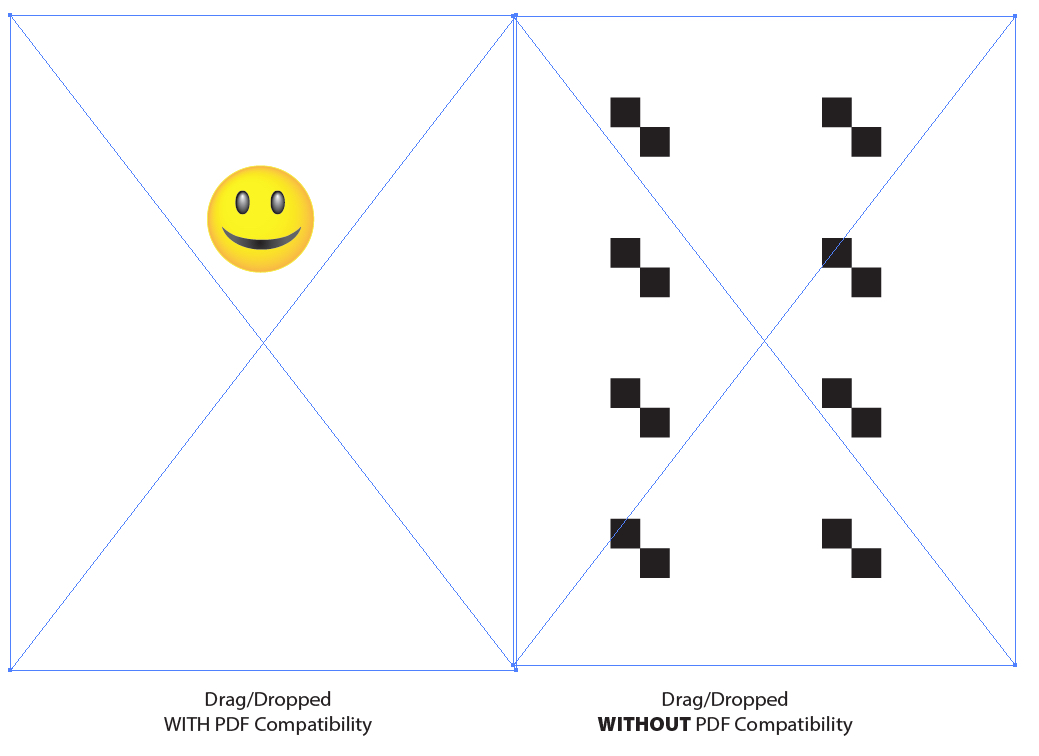 The bounding rectangle is the artboard size in the original AI file.

Upon output, the placed artwork is treated as if you printed the original file.

This method offers the advantage of "subscribing" to the original file that you dropped. If you edit the original and save it, the "dropped" image will update as well to reflect the file changes.

In your scenario, it should not be an issue to drag/drop multiple Illustrator files into one common file if the goal is merely a contact sheet to display multiple variations.

If editing is the desire, you can drag/drop them all, then select them and click the EXPAND button on the Control Panel across the top of the workspace. This will expand the placed art to the state of the PDF. This often means there are multiple clipping masks - there's always 1 clipping mask for the original artboard which can be easily deleted. But there may also be clipping masks for things like gradients since what was "placed" was the flattened PDF Compatible data.

Note how gradients have been flattened to raster images with clipping mask making further editing harder. This is just something to be aware of and the major reason you would not want to drag/drop files you intend to edit. For editing, it's often easier to copy/paste from the original artwork.

Not the answer you're looking for? Browse other questions tagged adobe-illustrator icon artboard or ask your own question.

32
Scaling a text box in Illustrator CS6 (without scaling text)
1
Vector pasting in wrong spot / Font Lab and Illustrator
14
Create more than one artboard when document is already saved?
2
Getting Transparent Images from Photoshop into Illustrator
6
Illustrator: how to change the artboard number?
0
Illustrator Graph Larger than Artboard
0
Symbols or templates in Illustrator for use in developing an icon set
2
Artboard boundary not visible in Illustrator CC
2
Make complex form appear “disappeared” using dashes