Where should you use a monogram?

I am making a logo and it's associated monogram for my college section and I am wondering in what situations a monogram should be used ?

My biggest concern about the monogram is that contrary to the monograms of widely known brands (such as Louis Vuitton or Channel) it isn't something that you would know what it is about just by looking at it. So to me, it seems logic to avoid it in any situations where it wouldn't have the surrounding context enabling you to know what it is about... this leads me to this question : where and when should a monogram be used ? When should you avoid it ?

I am also wondering if it is recommended to use the monogram next to the logo (especially since the logo is essentially composed of text) ? To me, it seems a little bit redundant and graphically unpleasant.

If you look into your target group I think you will find that Monograms are widely used in Universities. So, who is your college sections target group? Only people who know the name already?

You will probably find that marketing can go outward and inward, with an "official" Logo for representation and recognition towards a larger public audiece and e.g. a monogram for people associated with it.

Academic Mark This is the primary mark that embodies our academic efforts. It must be present and appear unchanged on all communications. Properly using the Academic Mark.

Monogram The Notre Dame monogram is the University’s most recognizable logo. However, outside of Athletics, it should be used as a graphic element, and always in connection with the academic mark.

Where and when should a monogram be used?

In some cases the monogram can be used for the favicon image.

You can also use it on letterhead as a watermark or as background patterns on some other projects.

You can use it for stamps, pins, seals, badges, or stickers.

It can be use as a nice subtle embossing or spot varnish on a business card, or high budget print project.

There's so many ways to use it or create concepts based on it that it's actually nice to have one. As for mascots, a tagline or anything that is part of the identity of a business, the monogram will also end up being associated with it at some point.

It's by using it that the audience will know that monogram is associated with the College. It doesn't really matter if the monogram doesn't look 100% related to the logo. You can think of JRR Tolkien monogram for example. You'd show it by itself to people who know nothing about him, they won't even know it's his "seal" or even see the letters in the monogram. Even 15-20 years ago, way less people than today knew about it, only the "exclusive fans" did. But if you show it to his audience now, they don't need to be told it's the JRR Tolkien signature/monogram, they saw it on the Hobbit cover, movie posters, magazines, etc. There was some brand recognition work done over time and exposition to that symbol. 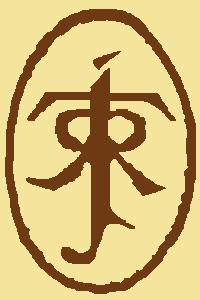 When should you avoid it?

You shouldn't use it for the sake of using it!

For example, you asked if it should be used with the logo and if it won't be redundant: well you got a point, it might be too much unless you succeed in incorporating it somehow as a badge or something.

But it shouldn't be used all the time if possible; only if it adds a nice touch to the design or if it's necessary. A monogram can be considered a bit like the abbreviation of a logo and in general, you don't need to use the whole logo and its "abbreviation" at the same time.

It's possible your client/college/managers will demand you to use it everywhere and every time because some people are like that... You'll need to either try to give them the "abbreviation" explanation to be able to have the freedom to use it or not, or you might need to find creative ways to incorporate it as patterns or watermark-style to please them.

13
Is there any service where you can check your designed logo against trademarked logos?
18
Logo Pack - What should I include?
5
What system do you use to name your logos?
3
Can you use logo design that wasn't used by the client in your portfolio?
3
Should you use both a Wordmark and a Lettermark Logo together at the same time?
3
Are you allowed to use another company's logo for a graphic design project?
17
Are you allowed to use a warning sign as a logo or is this copyrighted?