How to get flat collection of paths from stacked ones

Here's an image to help (the top is the original image, the bottom is after moving the white object to the front): 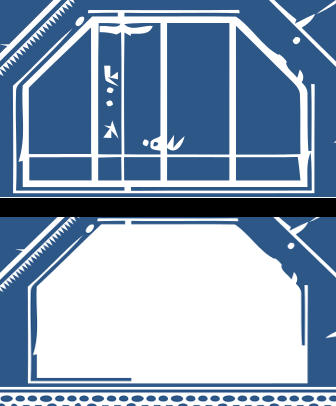 What I need is an object that is all of the white in the image. The problem is that the white space is created by stacking blue objects on top of white, so I can't just remove all the blue objects from the .svg file. How can I create objects of the visible white areas?

In the example image, that would mean that instead of white and blue stacked on top of each other, it would be a flat image - blue objects with white objects around them. If you move blue or white, there would be nothing behind it.

A totally different approach which works also (even if it's a bit odd) is to take a screenshot, import it into a new Inkscape file (File -> Import) and then do Trace Bitmap (it's in the Path menu). This creates a vector object on top of the selected bitmap.

I usually prefer the "vector" approach (as explained in other answers), but sometimes the Bitmap Trace is a kind of "quick and dirty" solution that works well.

3
Cropping SVG files
2
Drawing a ribbon banner with text in Illustrator
5
Svg not showing shadows in web browsers (Inkscape)
0
How can I create a shape based on contiguous color area in Inkscape?
0
Object showing behind transparent gradient
0
Illustrator saving as SVG causes transparent offset between objects
1
PS - Color changeable object using SVG
2
How to optimize an Illustrator .pdf loading?
1
White space being added above and below SVG when exporting in Illustrator