I'm designing an image for a clothing company and this is my first art gig job ever since I graduated from my uni in May, and well I don't have any experience in getting an image print ready for screen printing. I have done old school screen printing where I did color separations by hand of using acetate and oil based markers, so I am familiar with that and understanding that each color should have its own layer.

Now working on AI, everything was going fine until I ran into a problem, everything that's WHITE is on 1 layer and everything that is BLACK is on 1 layer. The black layer is underneath the white layer, and I need to add black stroke lines for hair strands for the design (I quickly drew with the pencil tool hair strands to show how I want the final image to look like), but if I draw the hair strands using the BLACK color layer, the strands won't show, because it will be hidden behind the WHITE hair. 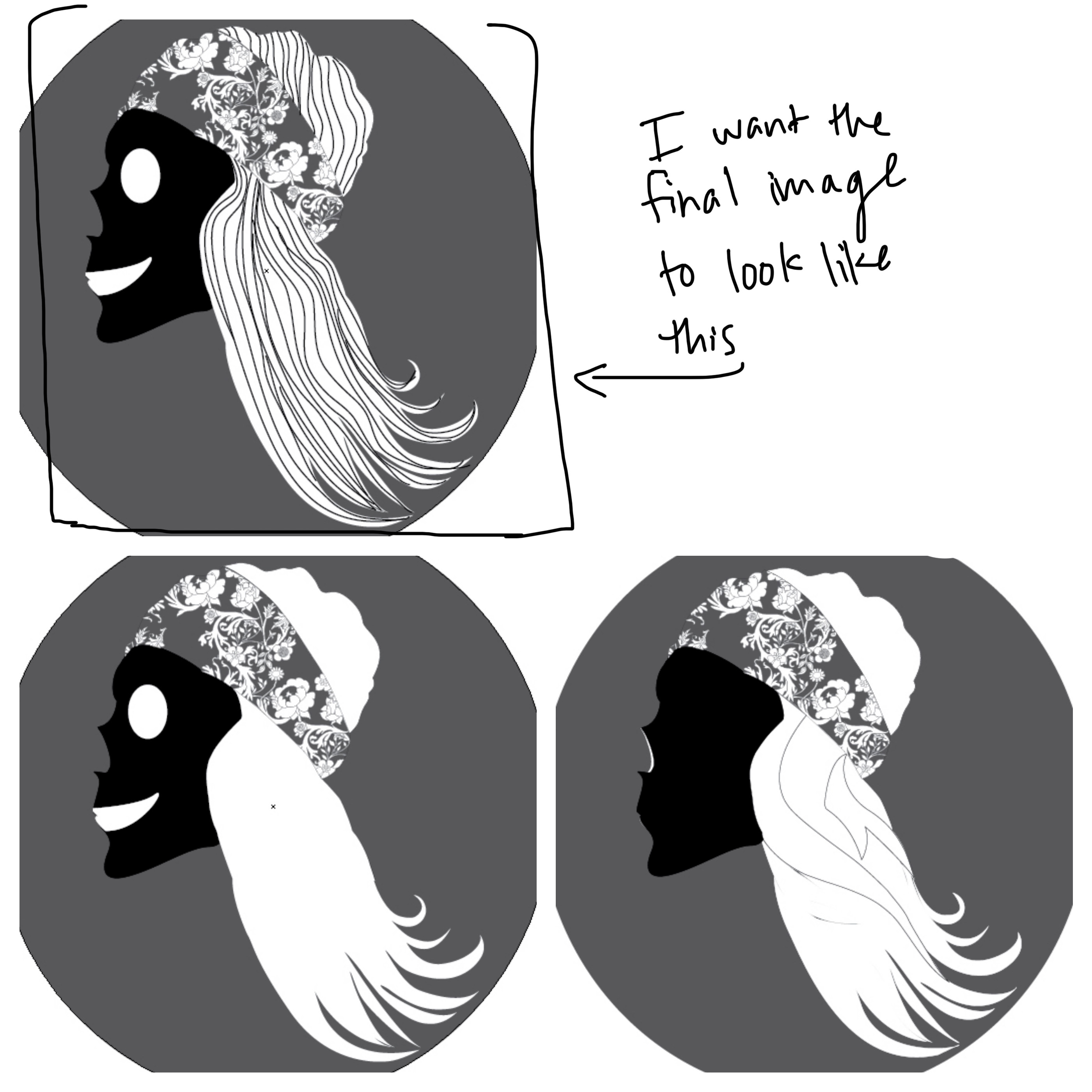 My question is, can I make ANOTHER BLACK LAYER just for the hair strand strokes? Or do you know how to fix my issue?

And don't mind the grey circle it's not part of the design, I just put a colored background so that the white hair can be seen.

I think you should use first use pathfinder in Illustrator to delete the over-lapping faces (e.g. basic hair structure and face) and yes, you should definitely make an ANOTHER BLACK LAYER just for the hair strand strokes.

Working in layers is always beneficial

Layers within a file mean nothing where output is concerned. Layers have no bearing on output and are only a tool to better organize, edit, or create an image. When the file is output it's seen as colors, not layers. You can have 50000 layers all with a single black object on each of them. When you print the file, it prints as one black plate, or 1 color, and ignores the layer structure completely. You are free to have as many layers as you want. There's no correlation between number of layers and number of colors.

In short... there's no technical reason each color "needs to have its own layer". You can freely spread colors across any number of layers you want.

When the file is output it is still just black art. (Or, in other words, a single color plate)

With the above posted, there are methods to remove shapes from other shapes - Pathfinder, Shape Builder Tool, overprinting, transparency settings, compound paths, clipping or opacity masks. All of these methods can be used as well.

Not the answer you're looking for? Browse other questions tagged adobe-illustrator layers screen-printing or ask your own question.

6
Simple Spot Color Separations for Screen Printing
4
How to make white stroke show up for a shirt printing
0
Why does a layer in overlay mode not show over black or white areas?
1
How to convert Grayscale object to a specific Solid coated color? - Illustrator CS5
0
Printing gradient over metallic silver
0
Set white objects to print as black in Illustrator
2
In GIMP, what is the equivilent to adding a 'spot channel' in PS ? Need a white layer below image and edges transparent for printing
0
Convert Black Outline Above White Shapes to Transparent in Illustrator