What are the differences between Gill Sans Nova and Gill Sans MT?

Gill Sans Nova was released by MonoType recently, and is already proving rather popular (possibly related to the attention-grabbing 75% discount on the complete set...).

Gill Sans has always been a highly rated font. I was surprised to not be able to find any clear explanation of how Gill Sans Nova improves on Monotype's earlier Gill Sans MT, beyond adding some variants:

...expands the much-loved Gill Sans family from 18 to 43 fonts and features a coordinated range of roman and condensed designs. Several new display fonts are available, including a suite of six inline weights, shadowed outline fonts that were never digitized and Gill Sans Nova Deco that was previously withdrawn from the Monotype library

In addition to the extra weights and styles, they're clearly promoting the Cyrillic support - I don't remember if MT had this, I suspect not.

What does Nova add, and what differences, if any, are there to the actual core typeface?

Gill Sans Nova is an remaster of the existing Gill Sans typeface from Monotype.

MT just refers to Monotype. Because different foundries often make their own new versions of existing typefaces, an abbreviation is sometimes added to the name (LT fx. refers to Linotype and FF to FontFont).

The Gill Sans® Nova typeface, by Monotype Studio designer George Ryan, expands the much-loved Gill Sans family from 18 to 43 fonts and features a coordinated range of roman and condensed designs. Several new display fonts are available, including a suite of six inline weights, shadowed outline fonts that were never digitized and Gill Sans Nova Deco that was previously withdrawn from the Monotype library.

A variety of OpenType® features are supported that make it possible to include experimental characters from different points in Gill Sans’s long history, including pointed diagonals on ‘A’, ‘V’ and ‘W’ and alternatives for ‘b’, ‘d’, ‘p’ and ‘q.’ Proportional figures are also available as an alternative to the tabular designs. The Gill Sans Nova family has a large character set that supports Latin, Greek and Cyrillic languages. The display weights support Latin only. [...]

The Gill Sans Nova typeface family is part of the new Eric Gill Series, drawing on Monotype’s heritage to remaster and expand and revitalize Eric Gill’s body of work, with more weights, more characters and more languages to meet a wide range of design requirements. The Series also brings to life new elements inspired by some of Gill’s unreleased work, recently discovered in Monotype’s archive of original typeface drawings, designer correspondence and documents from the last century. 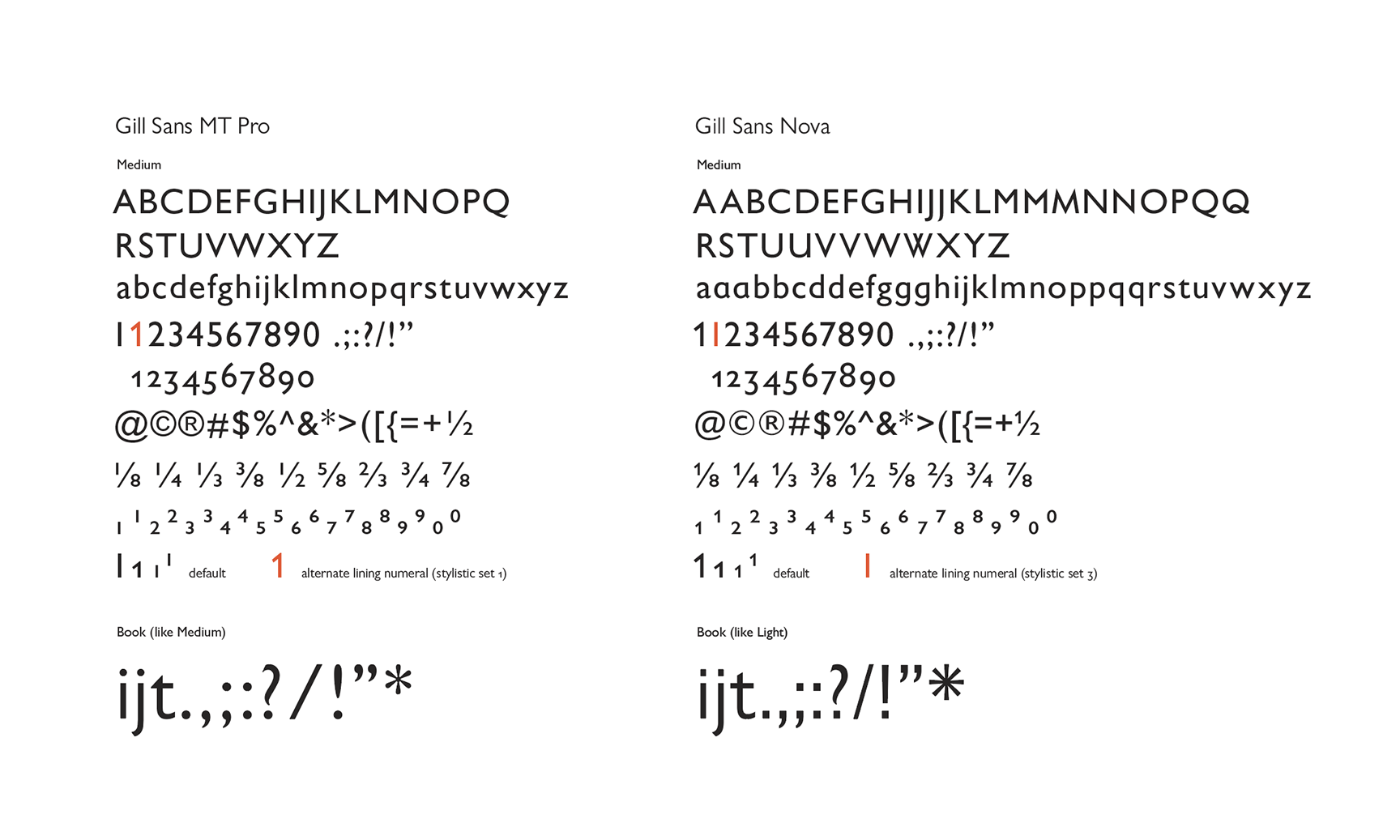 The major difference for technical writing is that Nova distinguishes the number 1 from capital I, whereas MT has the capital I and number 1 as the same form.