Is there a way to draw mirror/symmetric shapes in Inkscape? To clarify, I am asking about mirroring the shape while I'm drawing it, not to draw it and then mirror in.

I saw some videos on YouTube but I can't find the corresponding options on my version of Inkscape (v0.91)

According to this Inkscape Forum entry the mirror path effect is included in a recent development release, but it is not (yet?) available from the current stable release.

We can however use a mirrored clone of an object with the same results: 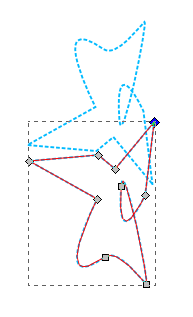 Here is how to clone and a tip for symmetric workflow. It is focused on a single path.

You can also group an object (Ctrl+G) and use the cloning process described below on that, allowing you to create new objects within that group that are then imitated by the clones as well.

Creating clone that changes while working

With some starting object selected, go to Edit->Clone->Create Tiled Clones and in there the first tab is called symmetry. There is a whole selection available here but, what you want is the reflection one.
Set rows, columns to 1 x 4. Why that is will be explained at the end.

The first clone appears above the original, the second to the right. If you have already used this function before, the old values still exist and you may need to reset all relevant tabs.

For working on the original after deselecting it (/selecting sth different), just select any clone and use Shift+D id est Select Original.

You can also delete the clone above your original. Which makes accidental deselection of the original less unlikely.

When you are content with your design, you can remove gaps between two mirrored paths like that:
Selected the 3rd and 4th clone and unlink both by pressing Shift+Alt+D and then join the by pressing Ctrl+K.

Now you can take care of those middle nodes which aren't quite in the middle:
In the Node Edit Mode, draw a selection frame around one middle node and its mirror node and from the options at the top, below your task bar, select join nodes. Repeat for each middle-node pair.

By having cloned the tile four times you now have one final object of your design, and one working copy, ready for changes.

Cloning the original again automatically removes any remaining unlinked clone, before creating the new ones.
Just never join the original with a copy, otherwise you lose your working copy.

0
Inscape Version of Corel Draw's Clone Tool
1
How to draw a wing cascade with boundary layers?
3
Snap a path to itself
3
Non-rounded inset in Inkscape
6
How can I draw a loopback connector using Inkscape connectors
1
How do I draw pixel-perfect symmetrical elliptical shapes in Inkscape?
0
Seamless adjacent shapes in Inkscape
2
Inkscape: Can't move objects in groups
0
Ungrouping and moving groups in InkScape seems to cause anomalies
0
Keep last parameter from one task to the other in inkscape