What are my options to creating “carved stone” styled text?

I'm trying to achieve the 'cracked' and 'cut away' erosion. From my understanding, I will have to make the text 3D and in the a worm's eye perspective. Is the rest as simple as just drawing the lines in? Is there a guide I could go about to make it realistic and not too "over done"?

Also another concern is the bottom of the letters, does it look like it's just drawn in, or is there an option I can use to achieve the same style of effect?

How would you guys go about doing this?

I would take a piece of paper and sketch out the letters with a pencil. I would then trace over that with a technical pen, adding the stippled shading, cracks, etc. I would then carefully erase any pencil.

I would then take a (digital) photograph of this drawing as tight as possible to fill the frame and bring it into photo editing software. I would use the transform tool(s) to straighten out any parralax problems caused by tilt and angle of the camera.

I would convert to greyscale and then ramp up the contrast and brightness such that there is very nearly only black and white. Clean up as needed, and then save as a non-lossy tiff.

I would open up a vector program, place the TIFF and then convert to vector using trace functionality. I'd delete the raster image, leaving onyl the trace. I would group the whole thing and add a white stroke to the outline of the group, I would place the group on top of a black square.

In the image below, I sketched the letters in 60 seconds with a Sharpie marker (so thicker lines and poor detail), but I think the result differs mainly in time and effort (and talent). It is a PNG here, but the source is 100% vector: 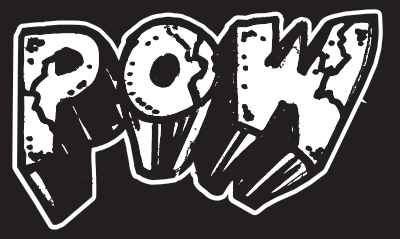 The following image is a very-much reduced in size version of the original snapshot. You can see some of the pencil lines in the final product. I did not erase and clean up the image as much as I might have for a real project: 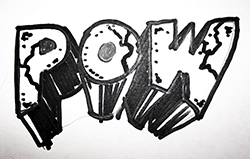 Not the answer you're looking for? Browse other questions tagged typography logo or ask your own question.

4
What is a text heavy design with multiple types of typography called?
2
Creating fancy script text without using a font
0
How should I go about redesigning this graphic?
1
Critique: Help with placement of logo elements in relation to each other for a web and app-based music service
5
Changing the position of outlines in Skech & Toon on Cinema 4d
0
Illustrator: How to make small balls (objects) wrap around text
2
What's wrong in this “logo”?
2
What is this type of (speech bubble text) style called?
6
Easier way to type multiple lines on a diagonal path in illustrator?