Is there a name for this kind of website footer graphic?

These images were quite popular on websites around the early 00's, from as far back as I can remember. They seemed to phase out with the introduction of flat and material website designs. They were often used to demonstrate the capabilities of the site (XHTML-compliant, CSS3, etc), and then longer strip variants were commonly used in signatures for bulletin boards.

They had a simple elegance about them, consisting of a small logo, a simple common font, a white background outlined by a thin black border and a further inset background colour to compliment the font. These aspects lead me to think they might have been generated, in which case does anyone know what they were named?

I believe you are actually referring to the Antipixel "under the hood" buttons (of blessed memory). 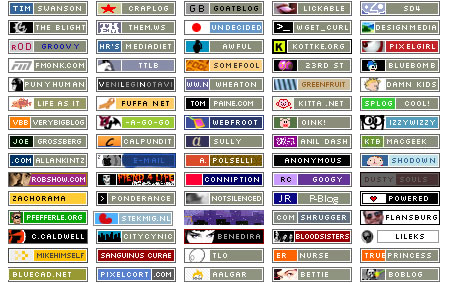 They were 80 pixels wide by 15 pixels high, with a simple bitmap font, stating that the site was web standards compliant, used CSS or XHTML, and so forth — along with any other buzzword-compliance that might have served as an in-joke in your blogging/tech community. There were at least a couple of button generator sites online at the time.

The trend bottomed out and died in the very early days of "Web 2.0", probably at about the same time as the CSS Zen Garden made the collection-of-bordered-boxes pretty much obsolete. You can still find traces of them in very old blog designs (along with 10- or 12-pixel text), but they don't tend to fit in well with a design that isn't the rigid bordered boxes that we once believed CSS imposed.

It's a webbadge Icon from the W3C Markup Validation Service. If your sites validates correctly you can add them to your website.

I am not quite sure what you are trying to ask. Some of these Iconset are still being used.

Not the answer you're looking for? Browse other questions tagged icon terminology button or ask your own question.