I'm hoping there is an easy fix for this! In InDesign, I always use the Live Distribute feature to equally space objects. This is much quicker than trying to calculate the space you want between objects using Horizontal Distribute Space or Vertical Distribute Space. Does anyone know how to do this in Illustrator or have an alternative solution?

Now, I don't remember how I originally found out about the Live Distribute shortcut, and I only figured out what it was called by googling. This is an example of the feature I'm talking about:

Whenever I try the same steps in Illustrator, it just expands all of the objects. I have done every type of aligning I can find in Illustrator (within the Align window), but none of them have the freedom of the function I'm looking for. So, I Googled around to figure out what it was called in Indesign (Live Distribute), then googled that feature with Illustrator...Nada. I've spent entirely too much time on several different occasions trying to figure this shortcut out, and I give up every time. ANY insight would help this girl out a ton! Thank you!

To clarify, above, I tried to simplify by showing identical objects, but ultimately I'm looking to use this function with items that are not exactly the same. For instance... same size "placed" images while creating a pattern as shown below. I suppose I could produce a box with step and repeat, then just place my images over the box, but I'm hoping for a more efficient/direct solution. 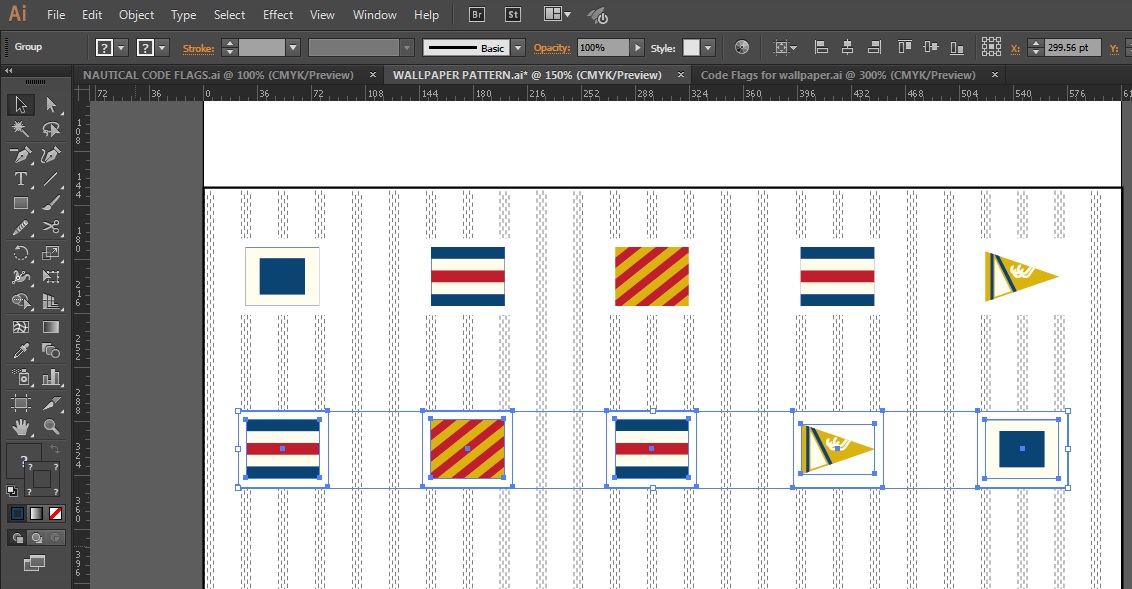 The consensus is to duplicate your item once then use CMD+D to duplicate over and over. I don't like this but if you are used to Step and Repeat in inDesign then this is the closest I've found to it. I really wish that we could get utility items like this across the board in Adobe products.

Alternatively this "Transform Each" function can work in illustrator: http://www.ehow.com/how_4430827_step-repeat-illustrator.html

As both softwares are vector based you could take advantage of those InDesign features and then export/copy the shapes to Illustrator.

There's nothing similar in Illustrator to the feature you described. If it was me I would use Indesign to somehow create the base design and then copy the shape to Illustrator and proceed from there.

Not the answer you're looking for? Browse other questions tagged adobe-illustrator adobe-indesign alignment or ask your own question.

33
How to align objects side by side with a specified distance between them in Illustrator?

5
Convert Illustrator Live Paint Objects to Standard Objects
2
What are good small icons for "Distribute objects"?
1
Distributing Objects in Illustrator
2
How do I align objects within the key object?
0
Inkscape: How to evenly distribute lines within a rectangle?
0
Using tabs with multiple lines of text in two columns (InDesign)
3
Where is "Distribute Horizontal Space" in Inkscape 1.0+?
1
Evenly distribute spacing between 3 text frames