I am requesting feedback regarding the use of the letter "r" from the logo with other images and text to create and overarching theme/identity for the brand. Which of the following options (A, B or C) is a better approach? Thanks!

Original question: I designed a logotype for a client's business containing a stylized letter "R". Is it a good idea to use just the stylized "R" from the logotype to develop creative theme/concepts for the brand?

Assuming the logo itself is not up for discussion, I will say yes, you can use the r on its own.

I think example #3 is the best one.

I would also like to point out that 2 and 3 have "Lift" higher up and that works well. Lift - float - ascend etc., it emphasises the balloons (presumably) upwards motion, the direction you want your spirits to go :)

Yes; I think you can use the r, but do it with care. The reason I do not think it works well in #1 is partly because the context is missing a little... if the logo had been closer to the balloon/text, possibly in white-on-blue it would not look quite so bizarre jammed into the text like that. But to me it is a little "forced", and unnecessarily so.

It is a possibility that people will not instantly "get it", but I for one thinks that is not always a bad thing. A little intrigue, oddity makes for curious onlooker.

3 works best for me as it is a "freestanding" use of the r. It will then, eventually become an element of identity in itself independent of the logo, but that is in fact perfectly fine. I say go for it. Make the world a little more quirky.

I think there are tasteful ways to do so, especially if the "R" is the first letter of the company name. But even if it's not, I can imagine scenarios where using it as a secondary design element would work. You could even use the outline of the "R" as negative space, something like this: 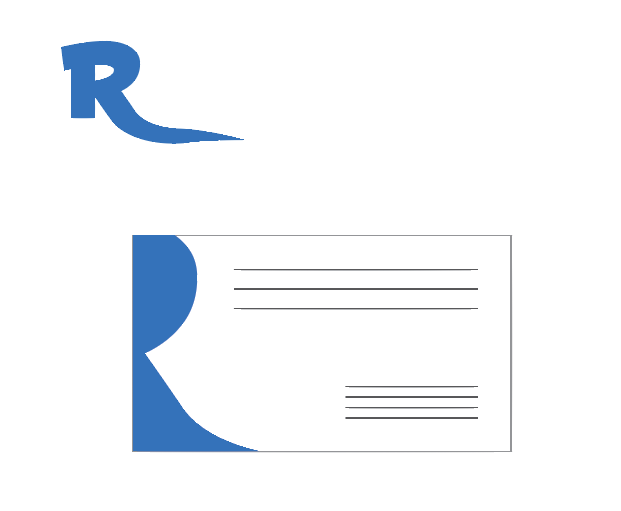 Not the answer you're looking for? Browse other questions tagged logo branding identity or ask your own question.

9
Branding a company that has no public identity
8
Methods for designing identity systems beyond the logo
3
Should I give a client more logo options after refusing the initial designs?
20
Client wants font as logo
2
how to explain to a client why the logo he has on his mind is a bad idea?
3
License for logo of an open source (GPL) project
1
Logo design: Use different logos for different media, or use the most simple one for all purposes?
1
Why are precise measurements frequently included in brand identities?
4
How to extract a client's logo expectations
0
Critique request: Logo design for a tech company