What happened to pasted SmartObjects from Illustrator to Photoshop?

In older versions of Photoshop (before photoshop cc 2015, latest update)the app used to create smart objects from pasted paths out of Illustrator. When I wanted to edit the Paths (double clicking on the smart object in PS) Illustrator was opened and I was able to simply adjust the paths. After saving the PS Smart Object got updated. Pretty simple, pretty cool.

Now when I paste paths form Illustrator into photoshop, the app makes some kind of cloud smart object, with a little cloud icon before the layer. If I want to edit my pasted artwork, by double clicking, I get an error something like:

This element can't be edited in Photoshop..

(I actually get the german error)

I can't believe its not possible to paste illustrator artwork in Photoshop anymore as well as not having the opportunity to change the artwork afterwards.

I have the latest CC update on both programs, and I tested your issue, and I believe the problem lies in the "Add to my current library" option when pasting: 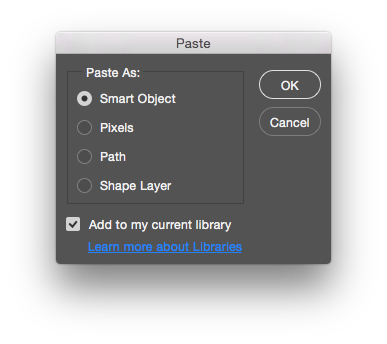 When that box is checked, it behaves exactly as you described. But if you uncheck the box, it uses the old behavior that you're used to.