Unicode superscript numbers 1 to 3 vs. 4 and above

Are there no Unicode superscript numbers whose heights do not differ?

I'm hoping to not have to use <super></super> for every one.

Georgia (font) does seem to render them at almost all the same height.

Unicode is about encoding characters not about their detailed shape. For example, the Unicode character U+0067 (Latin Small Letter G) can look quite differently depending on the typeface, e.g., its descender can be open or closed – Unicode does not care.

Analogously, Unicode does not prescribe anything regarding the height of the superscript numerals. However, the intention is that those characters are realised to match each other, i.e., with the same height. But taking care of this is the job of the type designer.

This is really only a historical thing and probably due to some backwards compatibility with older encodings or similar. One could dig into Unicode’s history to find out what exactly happened, but it does not really matter today.

The main impact of this is that the first three superscripts are in the Unicode Block Latin-1 Supplement. As the glyph coverage of a font is often specified and advertised in supported Unicode blocks, and Latin-1 Supplement is an important block (containing, e.g., the special characters needed for most European languages using the Latin alphabet), many type designers will implement all characters in this block for the sole reason that their font covers this block, even characters like ¬, ¦, and ¤ (U+00A4, U+00A6, and U+00AC) that are hardly used anymore nowadays.

When you use such a font that only supports the first three superscript numerals, whatever renders your text will use a fallback font for the other numerals, and thus they won’t match. This is very likely the observation that caused your question.

I'm hoping to not have to use <super></super> for every one.

As already hinted at above, typographically good superscript numbers aren’t just rescaled normal numbers – which you would usually get when using <sup> or similar¹. Rescaled normal numbers would typically be too thin or would dissonate with the normal text in other aspects. This problem is similar to that of optical sizes. Moreover, the default numerals may be are lowercase numerals, which you do not want to use for superscript numbers. 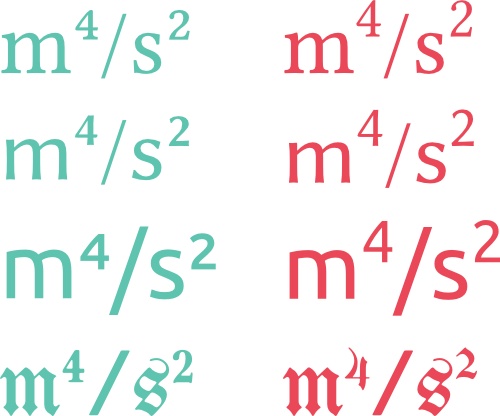 In all examples, the designated superscript numerals are bolder, broader and smaller than the scaled regular numerals. (Of course, you could scale the regular numerals even smaller, but this would intensify the other differences.)

¹ Unless your font supports the OpenType feature Superscript Forms (sups) and your browser uses this feature for the <sup> tag, when possible. However, as far as I can tell, no browser does this as of now.

It depends on the font and the software you are using.

On a web site, such as here in Graphic Design, it is possible that the default font only contains the 'standard' ¹²³ and not any others, so these will be taken from another font in the font stack.

There is no HTML code <super> but, assuming you mean <sup>, just use that. Even if you try to select a font that is common on most computers, it's still possible some user does not have that font, or he has but not in a version that is sure to contain the extra superscripts.

9
What is the benefit of variable fonts?
4
How should I mix small caps with digits or symbols?
3
What's with size-specific fonts?
0
Why glyph set of some fonts is so incomplete or inconsistent?

12
How to construct "lowercase digits" (i.e. text figures)?
9
Can the end of double spacing after periods be dated?
8
Freely available old-style serif fonts with multiple weights
26
What's the practical difference between a 'glyph' and a 'character'?
3
What's the technical term for groups of glyphs in an OpenType font?
1
Leading and aligning to a baseline grid in InDesign
18
What’s the right character for a minus sign?
1
Is it possible to align several single-line text frames to the common baseline?
4
(Hypothetical?) character: Vertically stacked apostrophe and comma?
4
How do you create alternate font glyphs/characters?