What is the recommended way to export a logo from Sketch to Illustrator?

I've always been intimidated by Illustrator and it's pen tool to the point that I void using it. I usually do everything on Photoshop and then import to Illustrator to use the live trace feature whenever I need to create my own vectors.

Today I bought Sketch, gave it a try and I am very amazed on how easy the vector tool is. I was able to create my first logo within a few hours. I know that Illustrator is the industry standard but I really want to keep using Sketch from now on.

I'm trying to figure out what is the best way to export my work to Illustrator. I exported as an eps but Illustrator merged the mop/center part of the logo (highlighted layer) as you can see here: 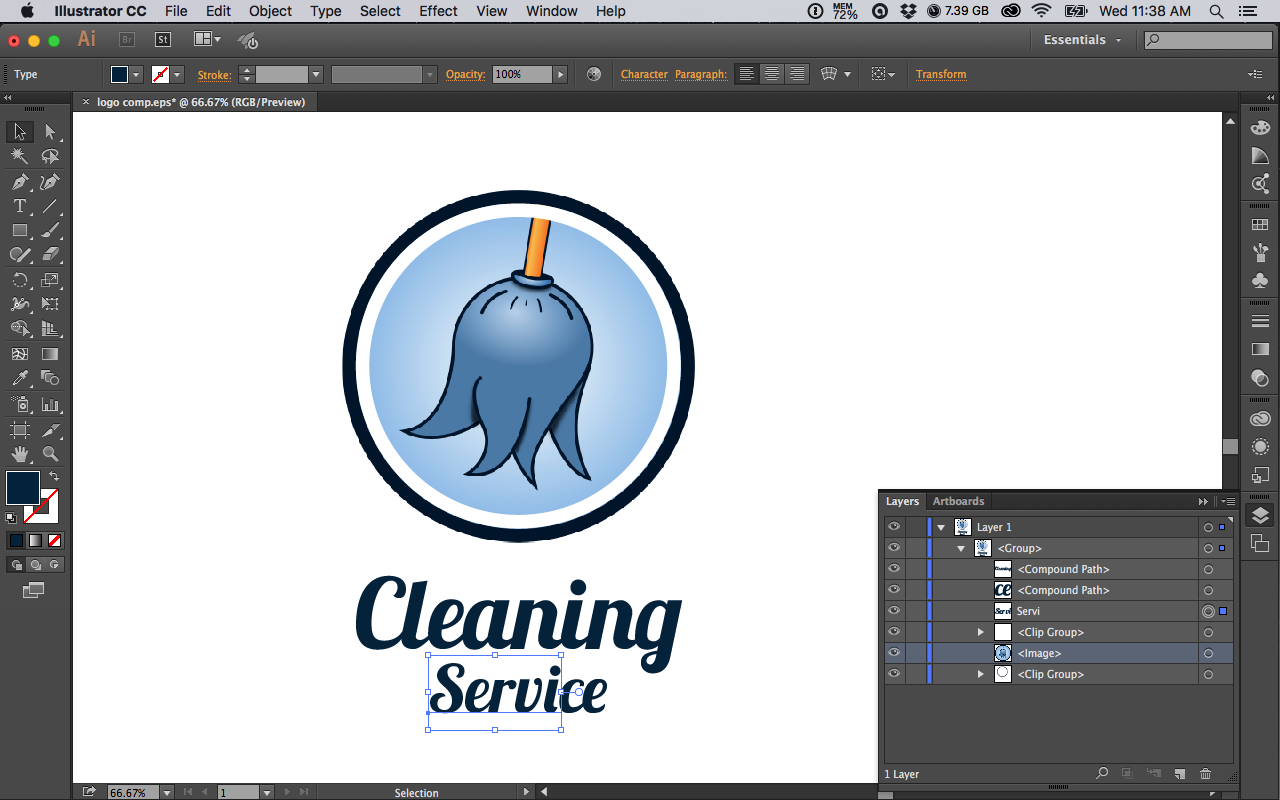 I wanted to show my Sketch file with all it's layers but I don't have enough reputation to add more images. But the mop is basically a composition of a bunch of layers in it's own layer group.

I also noticed the main gradient on the mop disappeared (even though it did gave me gradients on other elements), and the Gaussian blur I used for shadows looks weird: 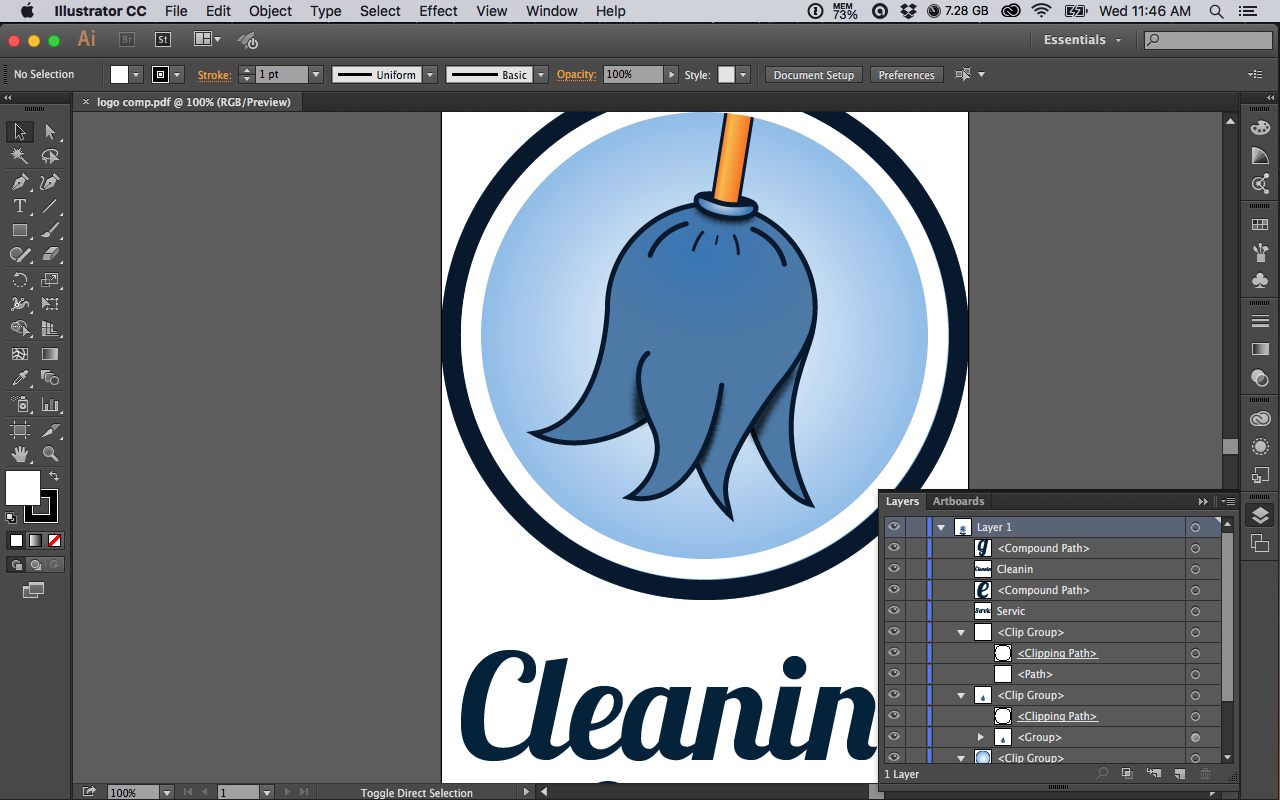 Both exporting options left some text to be editable and turned other characters into shapes, and all borders became independent layers, they are no longer part of their original shapes.

I'm doing something wrong? Is there a specific procedure to exporting to Illustrator that you can share? Am I supposed to export every individual layer and recreate the whole thing again in Illustrator?

Ah, yes, PDF... lovely support for transparent gradients, which I'm assuming is what happened to your file.

From the Sketch Documentation on File Formats for Export:

In your case, exporting an SVG might yield the result closest to what you're looking for: preserving your gradients and maintaining editable text layers.

I nearly always find myself exporting SVGs when I want to move from Sketch into another program (even Photoshop). But there's a bit of a caveat in that same document from above:

The preferred file format is EPS which has been an Adobe pre-requisite for 20 years back to the early postscript printers and Adobe Type Manager on Mac OS 6. Illustrator's vector pre-decessor, Freehand (formerly by Macromedia) also worked best with EPS files. It might not like everything you produce in Sketch though which is down to that programme. I believe that Sketch is primarily aimed at vector to font / web applications rather than serious vector design (like say biscuit packaging).

In terms of SVG as a vector format, I only use this to deliver transparent icons to my web author team mates so that they are easily edited in code and download quickly - we convert them into a font. Otherwise I stick with EPS or the originating AI file.

Speaking of Illustrator, if you can get access to a copy I would persevere with learning it as it is an industry standard, assuming you will move on to some more complex vector work in time. I understand your feelings totally and as a former Freehand user I resisted the move until my Mac would no longer install Freehand (I keep a 2006 Mac with 10.6 so that I can still use it).

Illustrator on first use, is overly complex as it adopts wider Adobe software palettes and shortcuts, great if you know Indesign, odd otherwise. For example, in Freehand you can colour a stroke within the stroke tool palette (logical) whereas in Illustrator (CS6) you have to go to another vertical Photoshop like palette and select fill or stroke first. I appreciate there will be a key shortcut before anyone jumps on me - my point here is as a new adopter it isn't the easiest software to work with. Another example; the way transparency works with the expand control and the canvas being white by default (even when its actually transparent) is real confusing when you first start (I had to Google that one). Easy in Freehand.

However, once you get into it and have followed a couple of tutorials it is flexible, resilient and fast... I can create a simple transparent icon now and export to SVG in minutes. Here is an example I made on my second look at the programme - no scan or font in this. 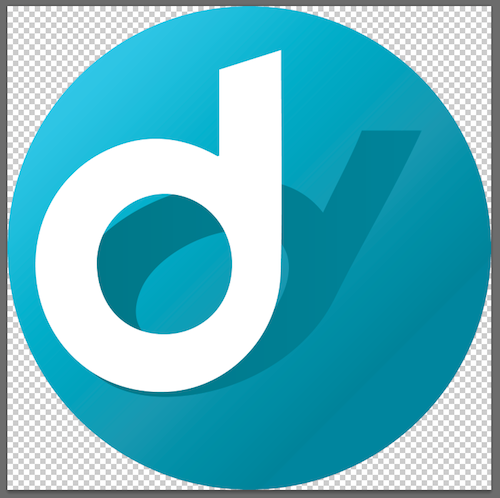 Not the answer you're looking for? Browse other questions tagged adobe-illustrator logo sketch-app or ask your own question.

6
Critique: Looking For Honest Feedback On A Logo Sketch
0
Too many compound paths in illustrator.. need to merge and delete from an object
1
Looking for a Adobe Illustrator to Sketch workflow solution
0
Unmerge some image from background - Sketch
0
How do I export images for each device in Sketch?
2
How to find the element in which layer on Sketch?
5
Exporting multiple vector shapes from Adobe Illustrator to Adobe Photoshop
4
Can you extract raster layers from Illustrator back to their source files?
1
How can I disable Sketch App from checking for updates?